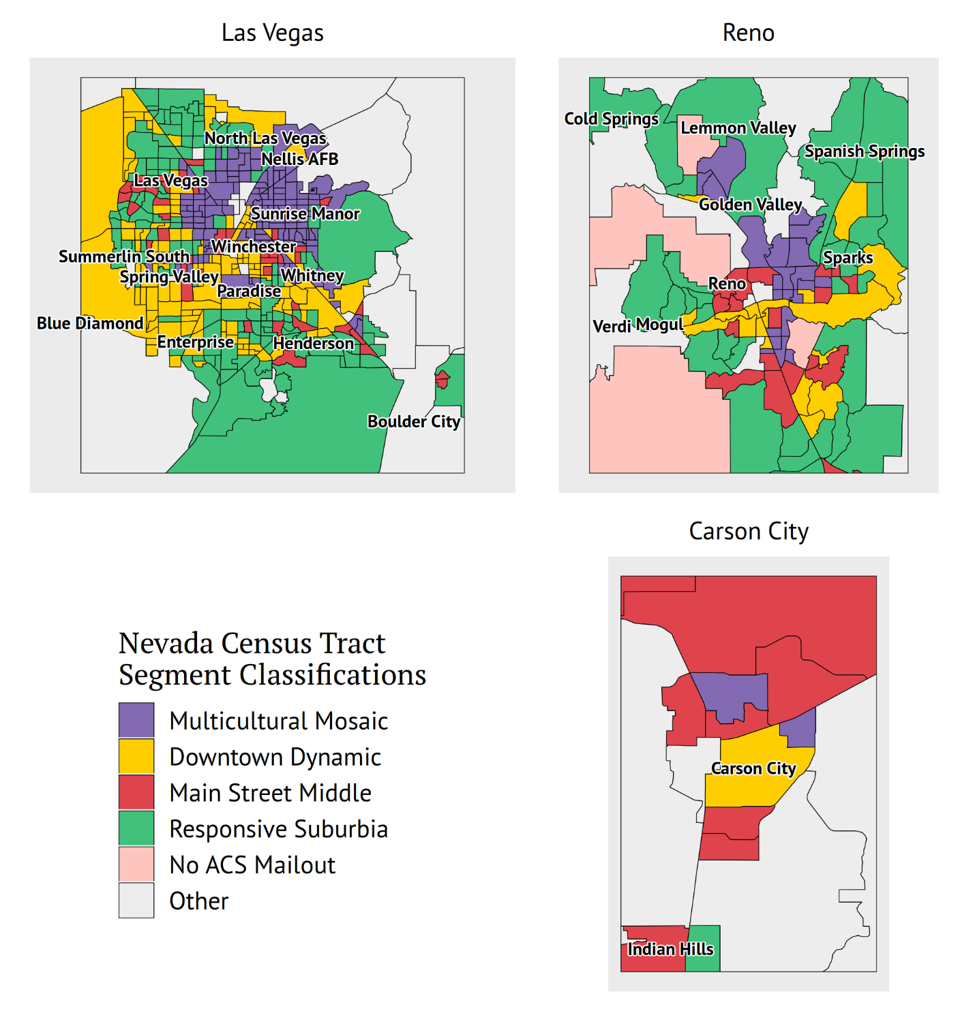 Approximately 26.4 percent of Nevadans live in “responsive suburbia” census tracts and another 11.3 percent live in “main street middle” tracts; The Census Bureau reports that residents of these census tracts are expected to respond to the census at high rates. The “multicultural mosaic” and “downtown dynamic” census tracts are especially important for census outreach efforts as the majority of Nevada’s hard-to-count population lives in these tracts.

Slightly more than a quarter of Nevadans (25.8 percent) reside in census tracts classified as “Multicultural Mosaic.” The predicted self-response rate (the proportion of those in a census tract who respond to the census by mail, phone, or Internet) of “multicultural mosaic” census tracts is 45 percent, well short of the anticipated tract average self-response rate of 60.5 percent. These tracts have high proportions of foreign-born residents (34 percent compared to 13 percent nationally), a high proportion of Latino residents, a lower-than-average proportion of college-educated residents (15 percent compared to 30 percent nationally), and lower-than-average household incomes. 45 percent of households in “multicultural mosaic” census tracts have children, compared to 32 percent nationally. Young children are especially difficult to count accurately in the census. Households in these areas have Internet access at rates near the national average, though the Census Bureau anticipates a below-average proportion of online census responses. Confidentiality is a major concern for residents of these census tracts.

Just under a quarter of Nevadans (24.0 percent) live in census tracts belonging to the “Downtown Dynamic” segment. The Census Bureau expects a slightly lower-than-average self-response rate from tracts in this segment (59 percent compared to an expected national average of 60.5 percent). Tracts in this segment have slightly above-average median household incomes, high levels of college education, more renters than homeowners, and a higher-than-average proportion of foreign-born residents. Households in this segment have higher-than-average rates of Internet access, and the Census Bureau anticipates a high rate of online responses. “Downtown Dynamic” census tracts have a high proportion of residents of ages 25 to 44. Residents of these tracts also tend to move frequently: 23 percent of residents of these tracts moved within the last year, compared to a national average of 15 percent.

Outreach efforts in Nevada’s cities, especially Las Vegas, are essential to obtaining a complete census count. A significant majority of Nevadans live in the state’s urban areas. More than half of Nevadans live in urban census tract segments that the Census Bureau expects will respond to the census at a rate below the national average. There are several factors that make the “downtown dynamic” and “multicultural mosaic” tracts especially hard to count. In “multicultural mosaic” tracts, these factors include high proportions of non-English-speaking households; a greater-than-average percentage of households with children; and low rates of college education. “Downtown dynamic” census tracts also have a higher-than-average percentage of foreign-born residents, and many residents of these tracts move relatively frequently. A multifaceted, multilingual outreach effort will be necessary to reach all residents of these census tracts.