The previous census snapshot introduced the census tract segmentation scheme produced by the Census Bureau Communications Research and Analytics Team (CRAT). The CRAT assigned a classification to each of Nevada’s census tracts according to factors such as demographics, media consumption habits, and Internet access.

This snapshot describes the features of Nevada’s hard-to-count rural areas, following the research conducted by the CRAT. The vast majority of Nevada, by area, is made up of census tracts classified as “Country Roads” or “Sparse Spaces.” These tracts comprise most of Nevada’s rural areas and represent approximately 11.4 percent of Nevada’s population. Residents of both census tract segments are expected to respond to the 2020 Census at rates somewhat lower than the national average. Figure 1 shows which of Nevada’s census tracts are classified as “Country Roads” or “Sparse Spaces.” 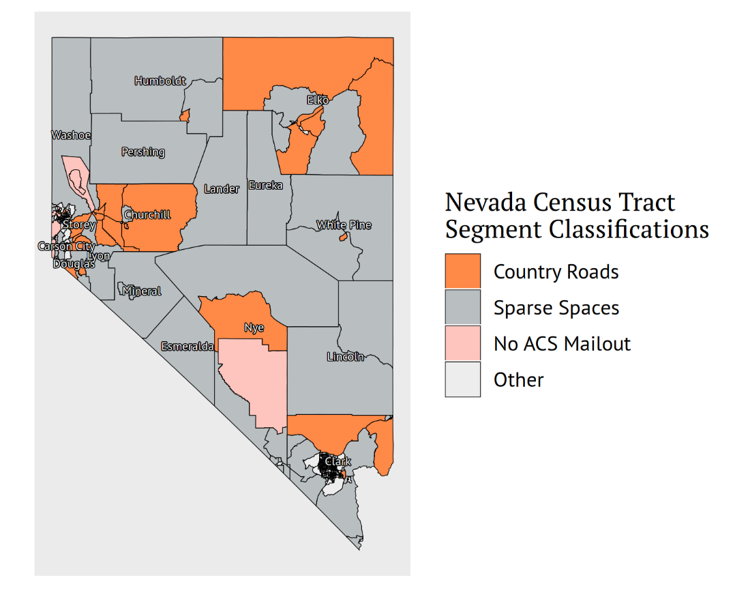 “Country roads” census tracts differ from “sparse spaces” in several important ways. The anticipated census response rate is considerably higher at 60 percent. Internet access rates are also higher, at 70 percent; however, this is not expected to translate to substantially higher online response rates. Residents of “country roads” census tracts tend to be older than the national average but younger than those in “sparse spaces” tracts: 16 percent are older than 65 years old. A higher proportion of households in “country roads” tracts than in “sparse spaces” tracts have children (32 percent compared to 23 percent).

Internet access and usage habits are particularly important as the 2020 census is the first decennial census in which most Americans are expected to respond online instead of submitting paper questionnaires (Internet response was not an option in previous decennial censuses). According to a survey conducted by the Census Bureau, Internet proficiency is correlated with likelihood to respond to the 2020 census: respondents with higher levels of Internet proficiency reported being more likely to respond to the census than those with lower levels of Internet proficiency. Given the lower-than-average rates of Internet access in rural Nevada, it will be important to ensure that residents of these areas have easy access to resources enabling them to obtain and complete paper census forms and that outreach efforts are not predominantly Internet-based.