The Guinn Center was founded in 2014 to bring an independent and data-driven voice to Nevada’s policy conversations.  The decision to call the policy center the Kenny C. Guinn Center for Policy Priorities (“Guinn Center”) was motivated by a desire to model and honor the work of the late Nevada Governor Kenny Guinn, known for his deep understanding of the state budget, his tireless commitment to education and to Nevada, and his ability to work across party lines. 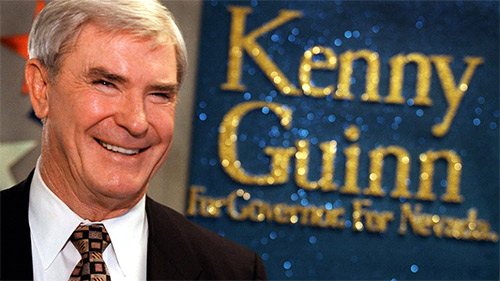 Kenny C. Guinn had established his career as an accomplished business leader, serving as chairman and president of PriMerit Bank and CEO of Southwest Gas, prior to serving two terms as Nevada’s 27th governor (1999 to 2007). During his tenure, Guinn applied his business acumen to the state’s budget and fiscal policies, and revamped budgeting and tax collections. He earned a reputation for knowing the budget line by line and for crunching his own numbers. “Governor Guinn took his job very seriously,” said Greg Bortolin, who served as press secretary under Guinn. “He’d get up at dawn and go over material. He’d work on weekends, crunching the numbers. He was always prepared. He knew the budget forwards and backwards.”

During his time in office and the years following, Governor Guinn received tremendous praise for his long-standing commitment to education. The son of migrant farm workers, Guinn was raised in Exeter, California. As a student at Exeter Union High school, he exceled at sports, including football, basketball, and swimming. Guinn attended Fresno State University on a college football scholarship and received a degree in physical education. He later earned a master’s degree in physical education at Fresno State and a doctorate in education from Utah State University. Governor Guinn worked his way through college as a teacher.  Five years after moving to Nevada from California, Guinn became the superintendent of the Clark County School District from 1969 to 1978. He also served as interim president of UNLV from 1994 to 1995, accepting a salary of $1 per year. While he was governor, Guinn created the Millennium Scholarship program, which used the state’s tobacco settlement money to establish college scholarships. This program has provided thousands of graduating Nevada high school students the opportunity to attend college at a Nevada university or community college.

Ability to work across party lines

Governor Guinn is remembered as a moderate Republican (and former Democrat) who developed a reputation as a tough, hard-working, pragmatic leader more interested in getting things done than pushing a partisan political agenda. “In the eight years that he served, he proved to me that he was a Nevadan first, not a partisan first,” said retired Nevada State Archivist Guy Rocha. Former State Senator William Raggio stated that Governor Guinn “[…] worked with both sides. He went out of his way to work with people on both sides of an issue, both political parties. He got a lot done because he was willing to compromise.” Former U.S. Senator Richard Bryan commented that Governor Guinn was “more interested in achieving results than scoring political points. He was not an ideologue. He would work both sides of the aisle.”  Former Gov. Bob Miller called Governor Guinn “a true leader” who was committed to Nevada. “He was an individual who spent his entire life trying to make Nevada a better place to live,” Miller said. “He was a person who was a true leader and he made tough decisions as governor.”