The release of the Economic Forum’s “Forecast of Future State Revenues” in December of even-numbered years marks an important date on Nevada’s fiscal calendar. This official forecast contains projections for the unrestricted revenue portion of the General Fund, which is the State’s major operating fund. It is binding on the Governor’s Recommended Budget for the upcoming biennium. The budget will be prepared by Governor Brian Sandoval, who will transition it to incoming Governor Steve Sisolak.

The importance of the General Fund cannot be understated. In the current (2017-2019) biennium, it comprises about 30.4 percent of the Legislatively Approved Budget. Deposits in the General Fund include taxes, fees, and licenses, amongst others, which means that collections represent a significant contribution from Nevada’s taxpayers. Moreover, it finances a broad array of programs and services within the State, and, as such, Nevada—like most states—is dependent on a robust General Fund to sustain its operations.

The state-mandated Economic Forum, which consists of a five-member committee drawn from the private sector, hears testimony from the Budget Division (Governor’s Office of Finance), the Fiscal Analysis Division (Legislative Counsel Bureau), and certain Executive Branch agencies (the Department of Taxation and the Gaming Control Board). These experts use national and statewide economic indicators that include, but are not limited to, inflation, employment, consumer spending, and housing, to provide estimates to the Economic Forum. Its members vote on projections of expected revenue for each statutorily-required source that is deposited in the General Fund.

The Economic Forum heard preliminary estimates for the General Fund at its November 2018 meeting. As we noted in this space, testimony suggested that the economy may be headed toward recession in FY 2020. This remains something of a debate, with the source of contention being whether or not we can expect a “full-blown” recession or something more akin to a slowdown. National reporting reflects this ambivalence. Some point to trade fears, the behavior of short-term interest rates (“inversion of the yield curve,” which can be interpreted as a signal of slowing growth), a falling stock market, declining oil prices, and more, as harbingers of recession. Others have observed that consumer spending remains high on rising U.S. household incomes, which can imply economic strength.

At the December 2018 meeting of the Economic Forum, State economists broadly rejected the specter of recession looming on the horizon, though they acknowledged that a potential slowdown in FY 2020 is likely. The General Fund estimates from State experts and the actual forecast are situated in this context, with modest growth projected across most revenue categories and for the General Fund as a whole. 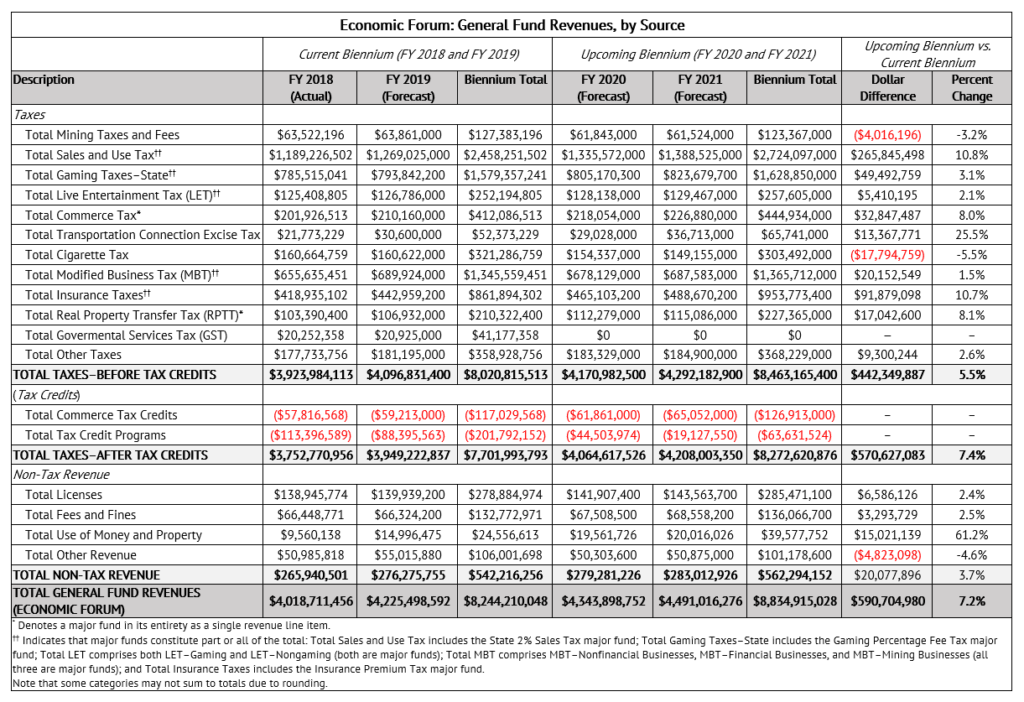 Note: Table 1 compiled by the Guinn Center. The Governmental Services Tax (GST) will be deposited in the State Highway Fund beginning in FY 2020, and thus, revenues from that source are not included in the General Fund for that year and FY 2021. Source: “Forecast of Future State Revenues.”

Note: Figure 1A constructed by the Guinn Center. Labels above columns indicate the dollar difference and percent change of the upcoming biennium (FY 2020 and FY 2021) over the current biennium (FY 2018 and FY 2019). Source: “Forecast of Future State Revenues.” 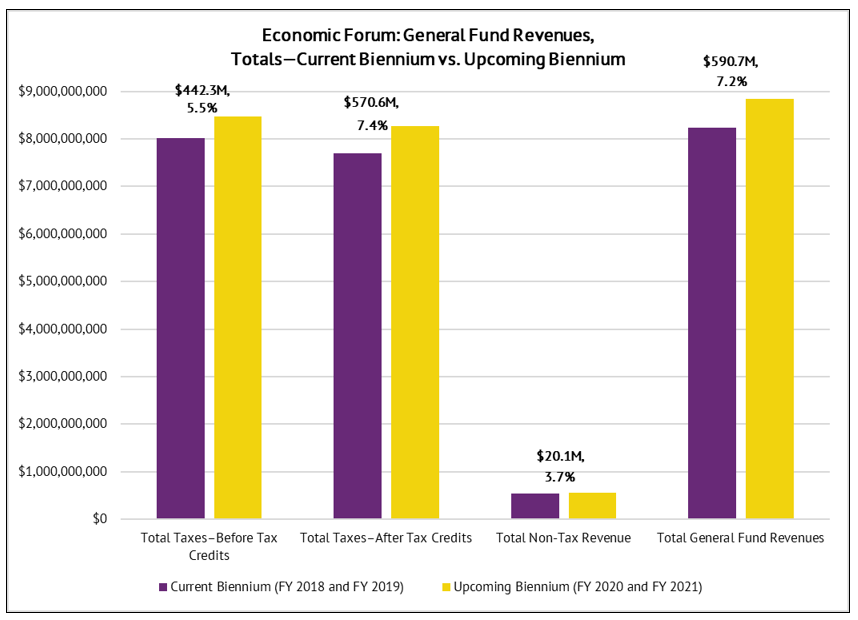 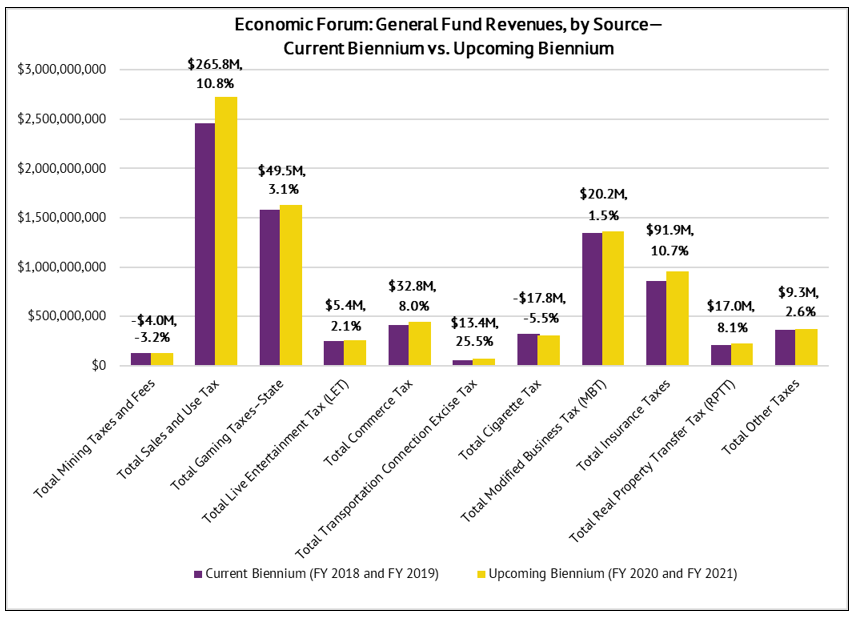 Note: Figure 1B constructed by the Guinn Center. Labels above columns indicate the dollar difference and percent change of the upcoming biennium (FY 2020 and FY 2021) over the current biennium (FY 2018 and FY 2019). Source: “Forecast of Future State Revenues.”

Overall, total General Fund revenue is projected to grow from the current biennium to the upcoming biennium. After tax credits, the 2019-2021 biennium total is about $8.8 billion, which is an increase of roughly $590.7 million over the current biennium, or about 7.2 percent growth. This total reflects general increases in most revenue categories, with the exceptions being total mining taxes and fees, the cigarette tax, and other revenue (e.g., Hoover Dam revenue, miscellaneous sales and refunds, etc.).

While Forum members engaged in some discussion regarding the impact of a potential slowdown on investors to hedge against volatility by shifting to more stable assets, such as minerals, they do not cast an individual vote on mining taxes, as it is not a major fund (major funds are discussed further below). Therefore, the reasons underlying the downward projection are not immediately apparent. The cigarette tax, similarly, was not subject to a dedicated dialogue or analysis. Its expected decrease is about $17.8 million (-5.5 percent) over the two biennia, which, we posit, may be the result of the efficacy of tobacco cessation outreach campaigns or the fact that consumers are more price-sensitive to cigarette tax increases than is conventionally understood—beginning in 2015, the tax on cigarettes increased by one dollar from 80 cents per pack to $1.80 per pack, and the effects of this legislative change may now be realized after some lag.

Revenue gains are evident in all other categories, the most significant of which are sales and use taxes. They are expected to increase by roughly $265.8 million (10.8 percent) from about $2.5 billion in FY 2018 and FY 2019 to approximately $2.7 billion in FY 2020 and FY 2021. This is important for two reasons: (1) it is the largest source of revenue in the General Fund, and the State is highly dependent on these taxes to finance its operations; and (2) it signals an expectation of economic strength, based on consumer spending projections for residents and visitors alike.

Although the dollar amounts are not especially high, the $91.9 million increase (10.7 percent) in insurance taxes indicates a stable source of growth for the State. As one expert explained to members of the Economic Forum, irrespective of economic conditions, people still require insurance, and health premiums and their concomitant taxes, in particular, may be expected to rise. Other substantial increases will be generated by the commerce tax ($32.8 million; 8.0 percent), the transportation connection excise tax ($13.4 million; 25.5 percent), and the real property transfer tax ($17.0 million; 8.1 percent).

The total modified business tax (MBT), which is levied on taxable wages and includes financial businesses, nonfinancial businesses, and mining businesses, will increase modestly over the two biennia, at $20.2 million (1.5 percent), from around $1.3 billion in the 2017-2019 biennium to roughly $1.4 billion in the 2019-2021 biennium. This is notable, as a permanent reduction in rates beginning in FY 2020—statutorily triggered by the combination of revenue from the commerce tax, modified business tax, and branch bank excise tax exceeding “104.0% of the Economic Forum’s May 1, 2017, forecasts for these revenues”—could have resulted in aggregate downward projections for the MBT in FY 2020 and FY 2021. The overall increases may suggest good prospects for wage growth.

We also need to consider expectations around major funds. A major fund is one in which its “total assets, liabilities, revenues, or expenditures/expenses… are at least 10 percent of the corresponding total for all funds of that category or type.” Some major funds have been addressed above, such as the commerce tax, which is both a revenue category unto itself and a major fund, while others, such as the insurance premium tax, is part of the insurance taxes revenue category. It should be noted that that the definition of a major fund should not be construed to mean that a certain tax comprises 10 percent of all General Fund revenues but rather that it is at least 10 percent of a given revenue category. The Guinn Center Silver State Snapshot©, “Nevada’s May 2017 Economic Forum,” released in 2017, provides background on each of the major funds. (Since that writing, the cigarette tax is no longer a major fund, while LET–nongaming, which is a tax paid by nongaming establishments for live entertainment in their venues, has been added.)

Figure 2. Major Funds vs. All Other General Fund Revenue, as a Share of the Total General Fund, Before Tax Credits, for the 2019-2021 Biennium 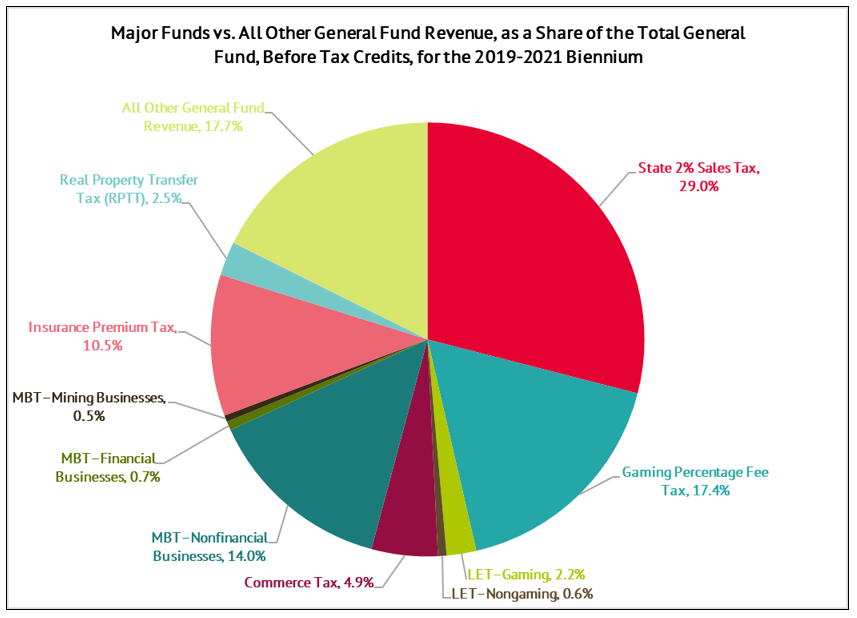 As the pie chart shows, 82.3 percent of General Fund revenue, before tax credits, is supplied by major funds. The “State 2% Sales Tax,” which is the portion of the overall state sales tax rate of 6.85 percent that is dedicated entirely to the General Fund, constitutes its most significant share, at 29.0 percent. Again, this highlights the importance of sales and use taxes to the State. It is followed by all other General Fund revenue (i.e., those that are not major funds), combined, at 17.7 percent, and then by the gaming percentage fee tax, at 17.4 percent. The latter reinforces the continued prominence of the gaming industry to Nevada’s economy. 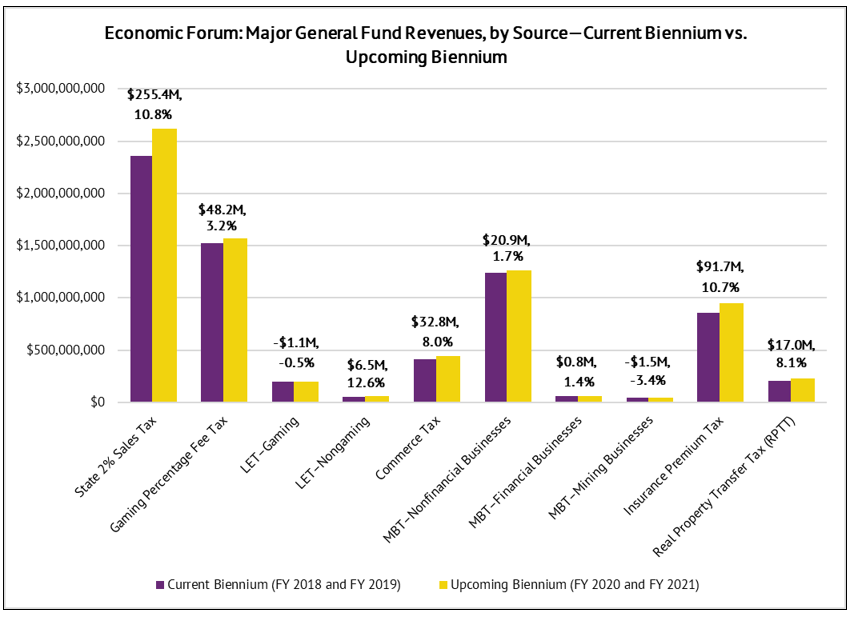 Note: Figure 3 constructed by the Guinn Center. Labels above columns indicate the dollar difference and percent change of the upcoming biennium (FY 2020 and FY 2021) over the current biennium (FY 2018 and FY 2019). Source: “Forecast of Future State Revenues.”

Major funds largely mirror the forecasts at the revenue category level, which underscores their importance to the General Fund as a whole. Growth is expected across all but two major funds, with the outliers being LET–Gaming and MBT–Mining Businesses. With regard to LET–Gaming, though visitation has increased, a combination of fewer nights in which venues host live events, a plethora of alternative entertainment options, and concert residencies at major hotel properties, has contributed to a “sideways” forecast. That is, LET–gaming is expected to decrease by about $1.1 million (-0.5 percent) over the two biennia. MBT–mining businesses is projected to decline by approximately $1.5 million (-3.4 percent), which is likely the result of the reduction in rates levied on taxable wages but is the only MBT category which is affected.

The largest percent gains are expected in the following major funds over the two biennia: the insurance premium tax ($91.7 million; 10.7 percent), the state sales tax ($255.4 million; 10.8 percent), and finally, LET–nongaming ($6.5 million; 12.6 percent). The insurance premium tax and the state sales tax conform to the previous discussion: the insurance premium tax may offer some stability to the State’s economy, should a slowdown occur, while the state sales tax forecast actually may evince a sense of economic confidence. As for LET–nongaming, its expected growth, albeit small in actual dollars, suggests that the aforementioned shift away from live events at gaming establishments possibly is being realized at their nongaming counterparts and may not be a substitution effect produced by an overall disinterest in live events.

Following the Economic Forum’s forecast, the next date on which to keep an eye is the release of the Governor’s Recommended Budget. He is required to submit it to the Director of the Legislative Counsel Bureau for transmittal to the Legislature no later than 14 calendar days before the start of the Legislative Session. At that time, we will be able to map General Fund revenue to spending priorities for the State in the upcoming biennium.