The Economic Forum meets in December of even-numbered years to provide an official forecast for the unrestricted revenue portion of the General Fund. That forecast is binding on the Governor’s Recommended Budget for the forthcoming biennium. The Forum also typically convenes about a month before the official forecast to hear testimony on the economic outlook and preliminary General Fund estimates from the Budget Division (Governor’s Office of Finance), the Fiscal Analysis Division (Legislative Counsel Bureau), and certain Executive Branch agencies (the Department of Taxation and the Gaming Control Board).

The Economic Forum met on November 8, 2018. In this overview of the meeting, we discuss what the preliminary forecast suggests for economic expectations in the Silver State.

In general, positive indicators signify robust economic conditions in the short term—that is, through fiscal year (FY) 2019—with long-term signals of economic softening beginning in FY 2020 as the national economy contracts as part of the “natural” business cycle.

The national economy, and, by extension, Nevada’s economy, is benefiting from dual fiscal stimuli. The Tax Cuts and Jobs Act (TCJA) of 2017 and discretionary spending by the federal government, collectively, are expected to help sustain economic health through FY 2019. However, federal discretionary spending is projected to decrease as a share of Gross Domestic Product (GDP) in FY 2020. And that is when a national contraction is expected, as noted above, with the country about 10 years out from the Great Recession. Nevada’s economy is cyclical, or especially sensitive to periods of prosperity (boom) and austerity (contraction/recession), so it may feel the recessionary effects. Moreover, the yield curve, which signals investors’ expectations regarding interest rates, may be exhibiting signs of inversion (i.e., a downward slope). This reflects a sense that the Federal Reserve may cut interest rates. Many economists view inverted yield curves as harbingers of recession.

Yet, other factors may provide a cushion in Nevada if the country slides into a downturn. For example, personal income in Nevada had the third-strongest gain in the nation in the second quarter of 2018; “reached $145 billion, up 5.8 [percent] % from a year ago”; and, on average, “has exceeded that for the U.S. over 16 of the past 18 quarters.”

A strong job market, in which Nevada’s labor force growth is outpacing other western states and the U.S. average, may help buffer the state from national economic forces. Specifically, labor demand currently outstrips supply, contributing to wage growth, which means that there is slack in the market that may withstand an influx of people from other parts of the country that are more affected by a contracting or even recessionary economy. However, that could create an oversupply problem, leading to possible wage pressure.

As noted previously, the Budget Division, the Fiscal Analysis Division, and certain Executive Branch agencies (where applicable) provide forecasts to the Economic Forum for certain major revenue funds. A major fund is one in which its “total assets, liabilities, revenues, or expenditures/expenses… are at least 10 percent of the corresponding total for all funds of that category or type.” At the December meeting, when the estimates will have been revised, Forum members will select a single forecast for each major fund, which binds on the Governor’s Recommended Budget. For example, at the December 6, 2016, meeting of the Economic Forum, members voted unanimously on the Fiscal Analysis Division’s forecast for the Sales Tax but the Budget Division’s forecast for the Insurance Premium Tax.

While the November 2018 forecast report does not contain the approved amounts for specific revenue line items for the 2019-2021 biennium, it does provide a comparison of year-to-date actual revenues, or “actuals,” for FY 2018 with that of FY 2019 for select revenue sources. Given that Nevada’s economy currently is exhibiting signs of strength but may experience some contraction in FY 2020, a year-over-year comparison of funding streams is useful for analysis. 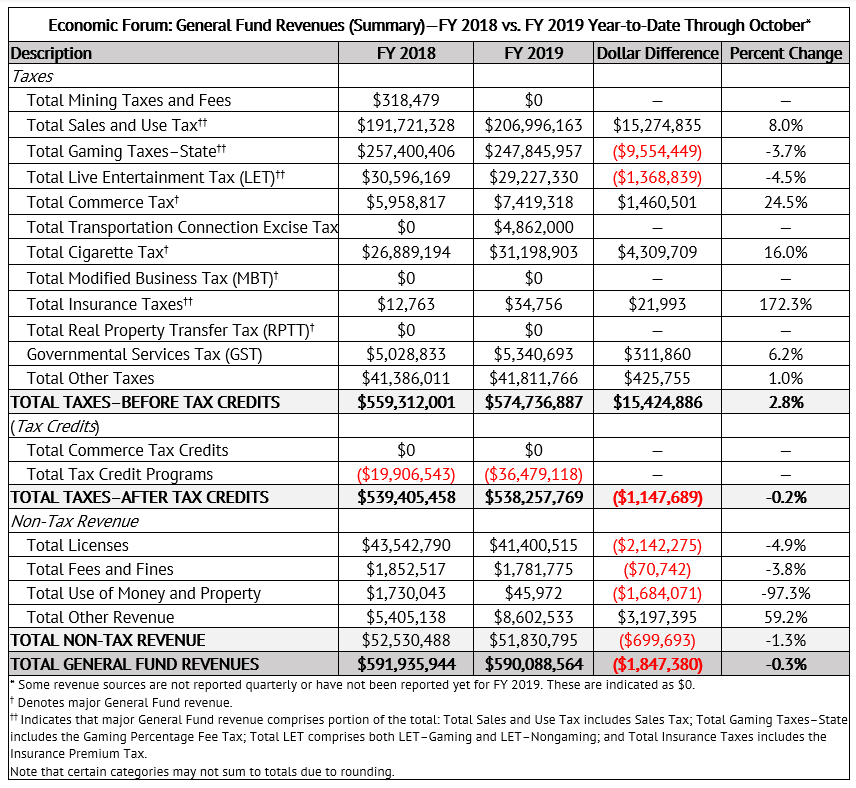 All tax categories, with the exception of gaming taxes and the live entertainment tax (LET), have increased in FY 2019 versus the same time frame in FY 2018. Gaming taxes decreased by 3.7 percent, and the LET decreased by 4.5 percent. A decrease in table game win on the Las Vegas Strip, resulting in weaker revenue—as reported in October—is at least partially responsible for the approximately $9.6 million dollar difference from FY 2018. There are several reasons for the $1.4 million decline in the LET, but as Michael Lawton, a senior research analyst with the Nevada Gaming Control Board, explained to members of the Economic Forum, some Strip properties have reported weak attendance at late-night attractions. As the LET is paid by venues for live entertainment events, difficulties in enticing visitors to shows, concerts, et cetera, could have contributed to the revenue decrease. Outside of other revenue, though, all non-tax revenue decreased in FY 2019, relative to the same period in FY 2018. 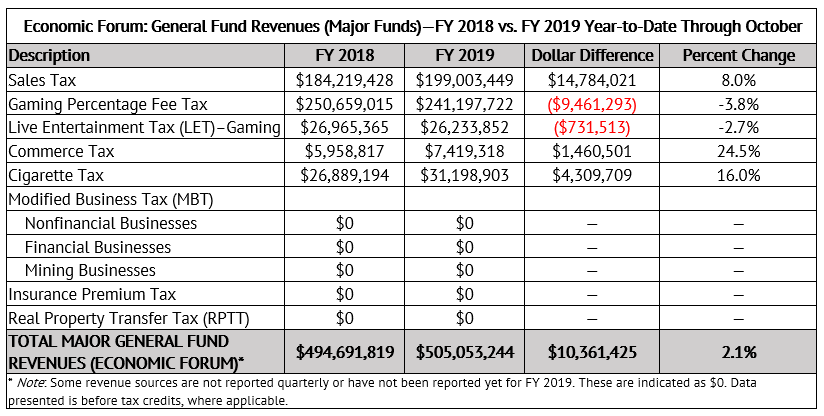 Overall, growth in the majority of revenue summary categories and major funds seems to reflect current economic strength in Nevada. We will continue to follow the Economic Forum, so check back in December once the official forecasts for the General Fund have been approved and released. 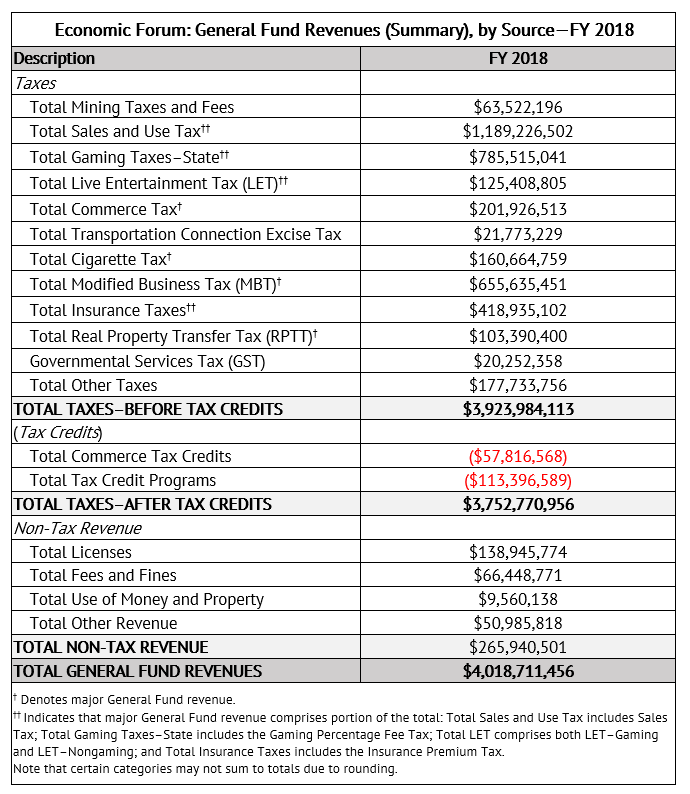 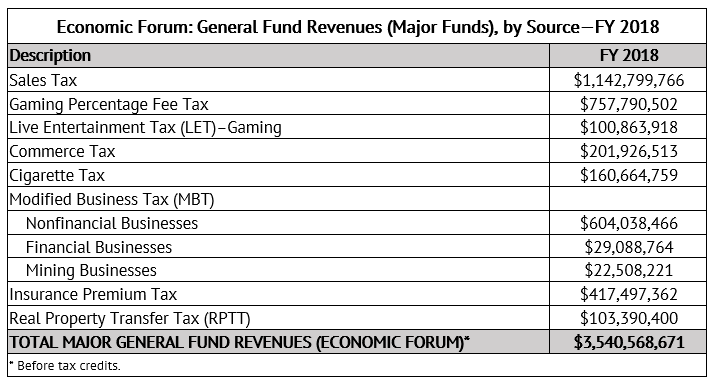