Our sixth census snapshot highlighted some of the challenges that will be faced when trying to obtain a compete census count in Nevada’s cities. One significant challenge is outreach to those who do not speak English well or at all. In this snapshot, we focus on the importance of multilingual outreach in ensuring a complete 2020 census count.

There are 139 census tracts in Clark County, most of them located in Las Vegas, wherein more than 10 percent of households have no residents over the age of 14 who speak only English or who speak English “very well” (from American Community Survey [ACS], out of options “Very well,”  “Well,” “Not well,” and “Not at all”).  Most of these census tracts belong to the “multicultural mosaic” segment described in the previous snapshot. Figure 1 shows the proportion of households in Las Vegas’s census tracts without residents over the age of 14 who speak English “very well.”

Figure 1: Proportion of Households in Las Vegas with No Residents Who Speak English “Very Well” 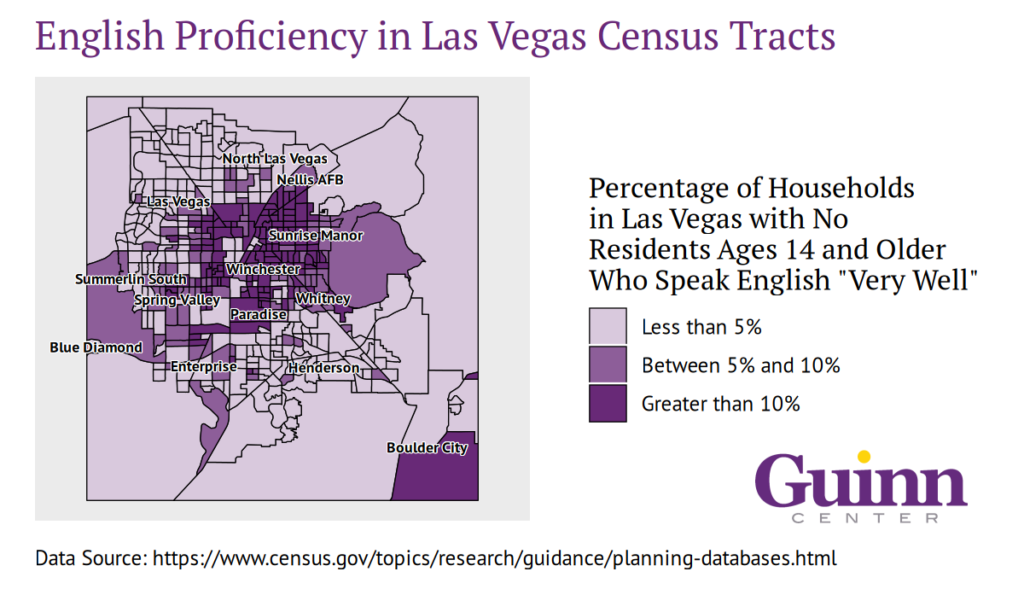 The Census Bureau conducted the 2020 Census Barriers, Attitudes, and Motivators Study (2020 CBAMS) in order to “drive the creative strategy and media planning including demographic specific messaging” for the 2020 census. The CBAMS survey asked respondents how well they spoke English. The final CBAMS report classified those who spoke English “very well” as “English proficient” and all other responses (“well,” “not well,” and “not at all”) as “Not English proficient.”

The Census Bureau’s 2015 data release titled “Detailed Languages Spoken at Home and Ability to Speak English for the Population 5 years and Over: 2009-2013,” which is based on the 2009-2013 ACS data, provides some insight into which languages will be particularly important for outreach efforts. The ten most-spoken languages in Clark County and the percentage of speakers of those languages who speak English less than “Very Well” are shown in table 1. This table demonstrates the importance of multilingual outreach: hundreds of thousands of Nevadans who speak a language other than English self-reported that they do not speak English “very well.”

Table 1: Top languages spoken in Clark County and percentage of speakers of those languages who speak English less than “Very Well.” Based on 2009-2013 ACS data.