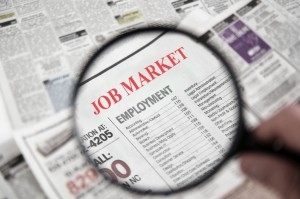 “Encouraging” was the word Nevada’s Chief Economist Bill Anderson used yesterday to describe the most recent labor market data for the Silver State. Anderson was speaking on behalf of the Department of Employment, Training and Rehabilitation (DETR) at the Economic Forum, the purpose of which is to provide “forecasts of the state’s General Fund revenues for each biennium budget.”

These improvements come after four years when Nevada had the highest jobless rate in the nation. Anderson noted that the current nonfarm unemployment rate is still 1.4 percent above the rate during the second quarter of 2007, but he said that DETR expects the rate could reach pre-recession levels by the end of the year. In fact, DETR estimates that job levels will exceed the pre-recession peak by 97,000 by the end of 2017.

Anderson added that the Silver State has experienced 64 consecutive months of job growth and the trend is expected to continue. Nevada has added approximately 140,000 new jobs between 2010 and 2015, with year-over-year growth remaining about 30,000.

Small businesses have been key players in job creation, with the number of jobs currently at an all-time high of nearly 600,000. Gains have been recorded for small business jobs in each of the last 20 quarters. The number of initial jobless claims for unemployment insurance has essentially reached their pre-recession levels, Anderson said.

While the data shared on Thursday) by DETR showed mostly positive trends, the news was not all good. Unemployment rates in three of Nevada’s rural counties remain well above the state average. Mineral County’s unemployment rate for April 2016 was 9.0 percent, Lyon County’s was 8.3 percent, and Nye County’s was 7.9 percent.

In addition to struggling to employ the state’s eligible workforce with the lowest education levels, Nevada lags behind other states in high school graduation rates. The U.S. Department of Education reported in December 2015 that the Silver State’s graduation rate of just 70 percent is the third lowest in the nation. Only New Mexico and the District of Columbia, with high school graduation rates of 68.5 and 61.4 percent respectively, fared worse. Moreover, slightly more than one-third of Nevada’s population has less than a high school diploma, which makes this is a disturbing statistic.

As Nevada’s population becomes increasingly diverse (49.5 percent of the population identifies as non-white), more effective measures are needed to ensure that minority populations are not shutout of the state’s economy upswing. In addition, the state must take reasonable steps to enable more jobs and opportunities are available across Nevada, particularly our rural communities.

The following are policy solutions that could help the Silver State achieve these critical objectives.