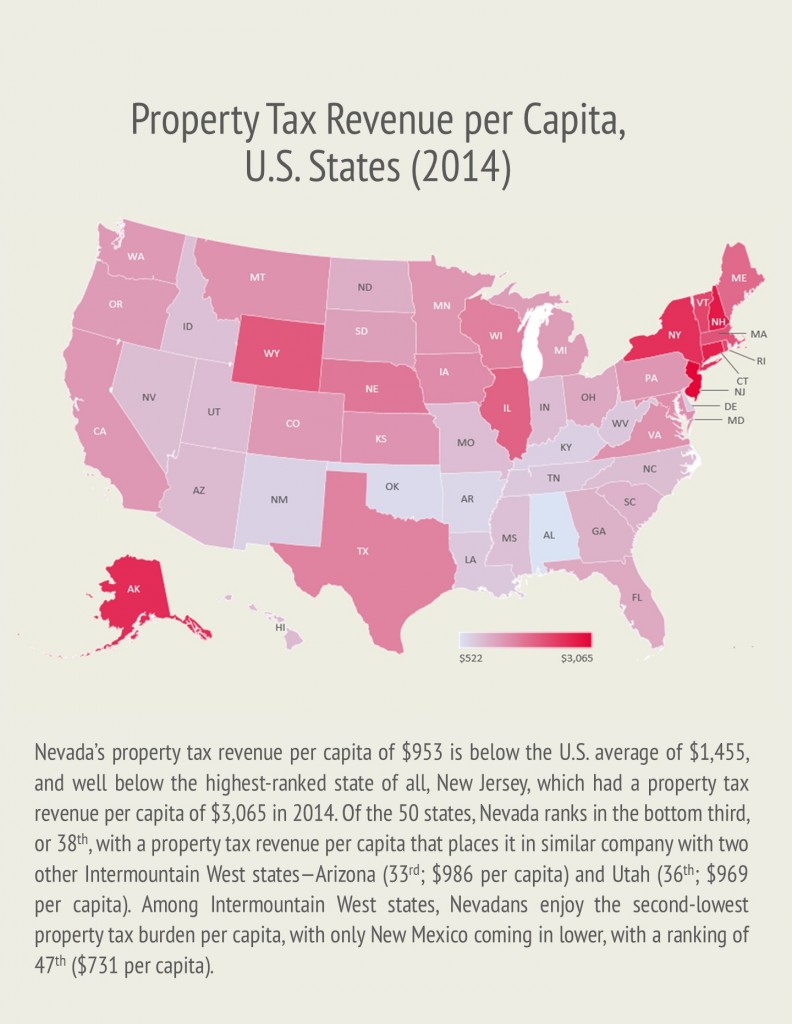 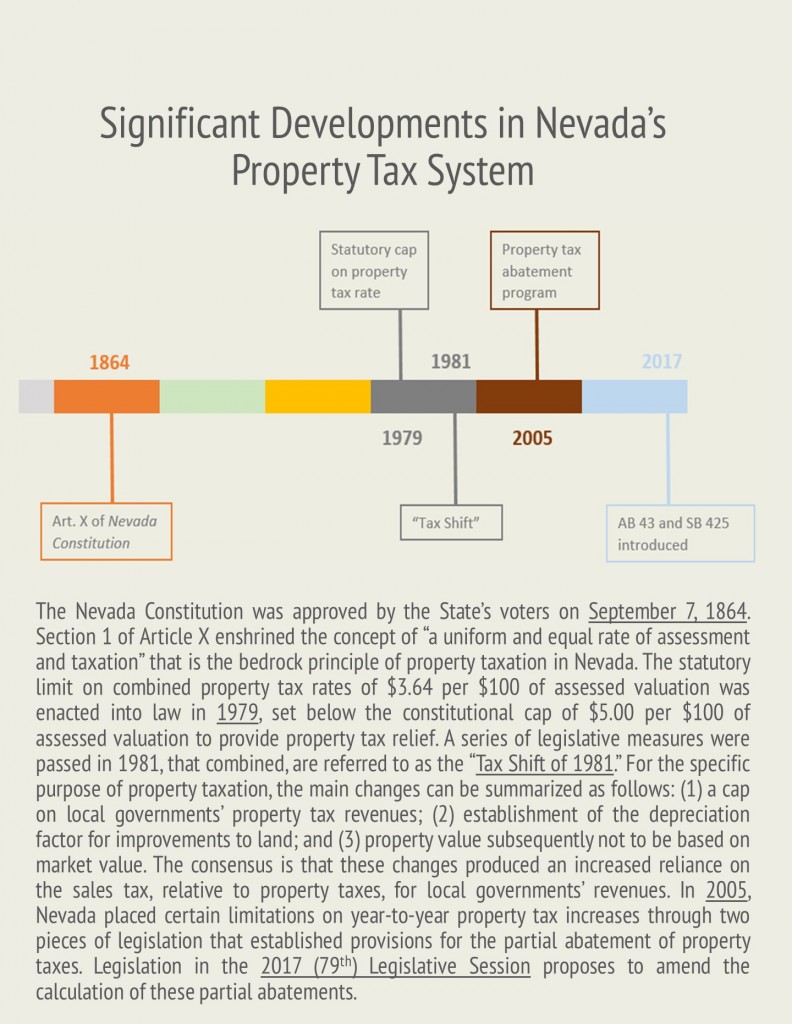 The Nevada Constitution was approved by the State’s voters on September 7, 1864. Section 1 of Article X enshrined the concept of “a uniform and equal rate of assessment and taxation” that is the bedrock principle of property taxation in Nevada. The statutory limit on combined property tax rates of $3.64 per $100 of assessed valuation was enacted into law in 1979, set below the constitutional cap of $5.00 per $100 of assessed valuation to provide property tax relief. A series of legislative measures were passed in 1981, that combined, are referred to as the “Tax Shift of 1981.” For the specific purpose of property taxation, the main changes can be summarized as follows: (1) a cap on local governments’ property tax revenues; (2) establishment of the depreciation factor for improvements to land; and (3) property value subsequently not to be based on market value. The consensus is that these changes produced an increased reliance on the sales tax, relative to property taxes, for local governments’ revenues. In 2005, Nevada placed certain limitations on year-to-year property tax increases through two pieces of legislation that established provisions for the partial abatement of property taxes. Legislation in the 2017 (79th) Legislative Session proposes to amend the calculation of these partial abatements. 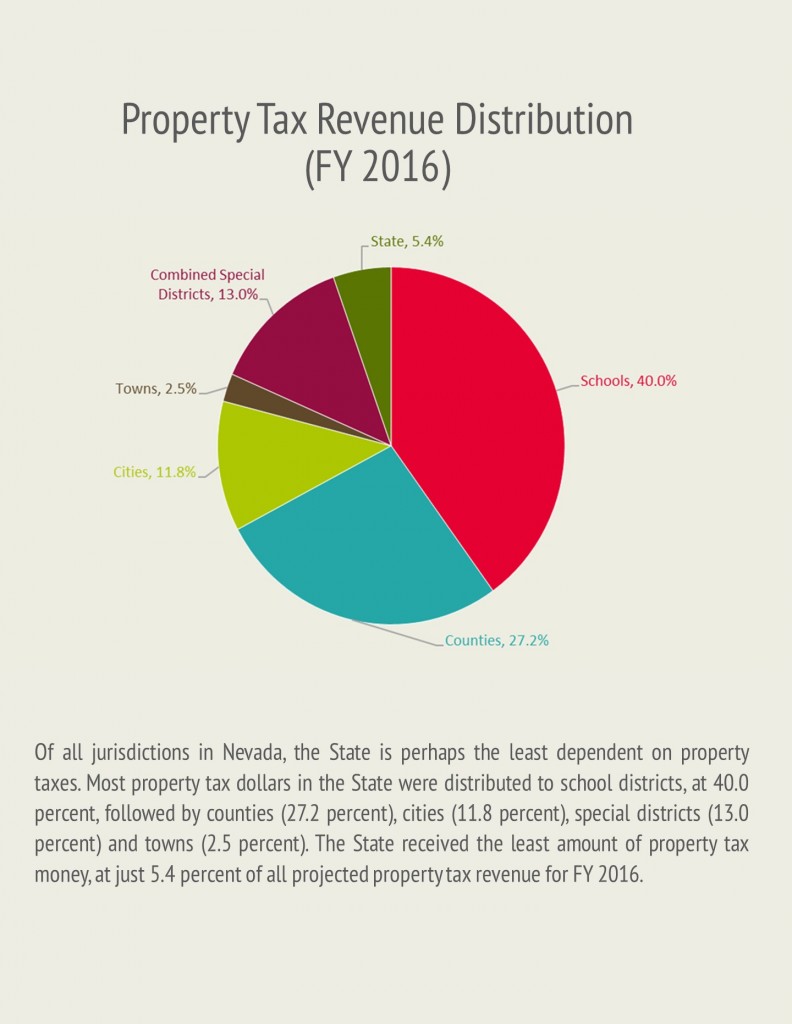 Of all jurisdictions in Nevada, the State is perhaps the least dependent on property taxes. Most property tax dollars in the State were distributed to school districts, at 40.0 percent, followed by counties (27.2 percent), cities (11.8 percent), special districts (13.0 percent) and towns (2.5 percent). The State received the least amount of property tax money, at just 5.4 percent of all projected property tax revenue for FY 2016. 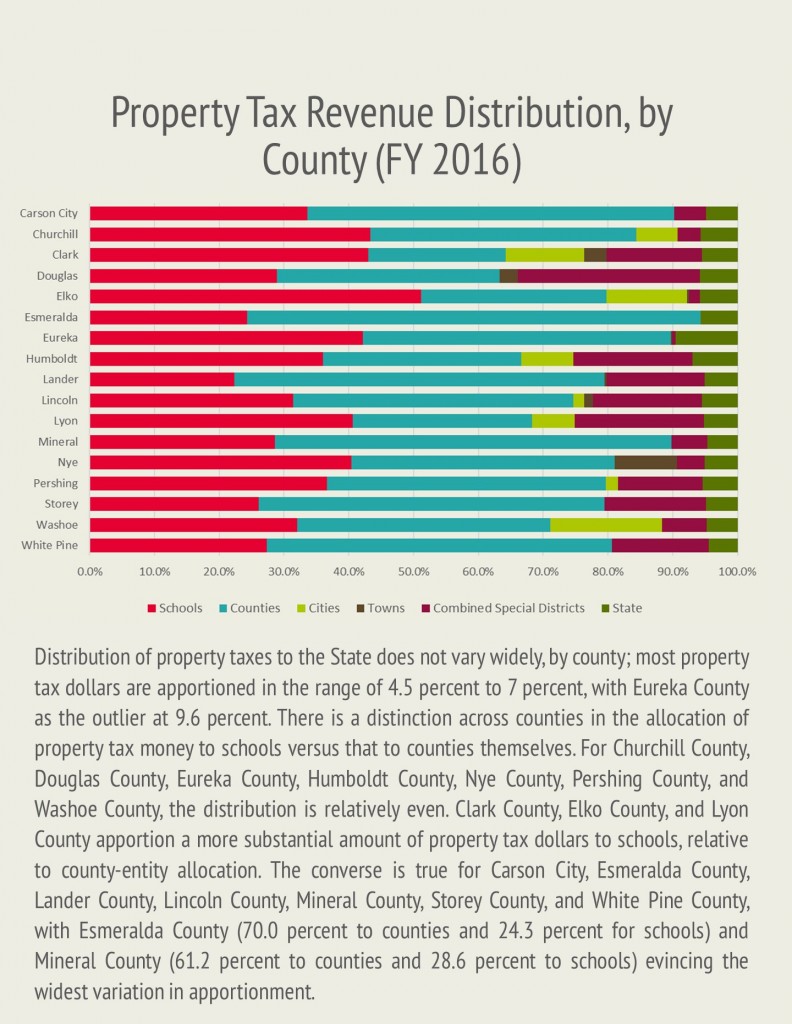 Distribution of property taxes to the State does not vary widely, by county; most property tax dollars are apportioned in the range of 4.5 percent to 7 percent, with Eureka County as the outlier at 9.6 percent. There is a distinction across counties in the allocation of property tax money to schools versus that to counties themselves. For Churchill County, Douglas County, Eureka County, Humboldt County, Nye County, Pershing County, and Washoe County, the distribution is relatively even. Clark County, Elko County, and Lyon County apportion a more substantial amount of property tax dollars to schools, relative to county-entity allocation. The converse is true for Carson City, Esmeralda County, Lander County, Lincoln County, Mineral County, Storey County, and White Pine County, with Esmeralda County (70.0 percent to counties and 24.3 percent for schools) and Mineral County (61.2 percent to counties and 28.6 percent to schools) evincing the widest variation in apportionment. 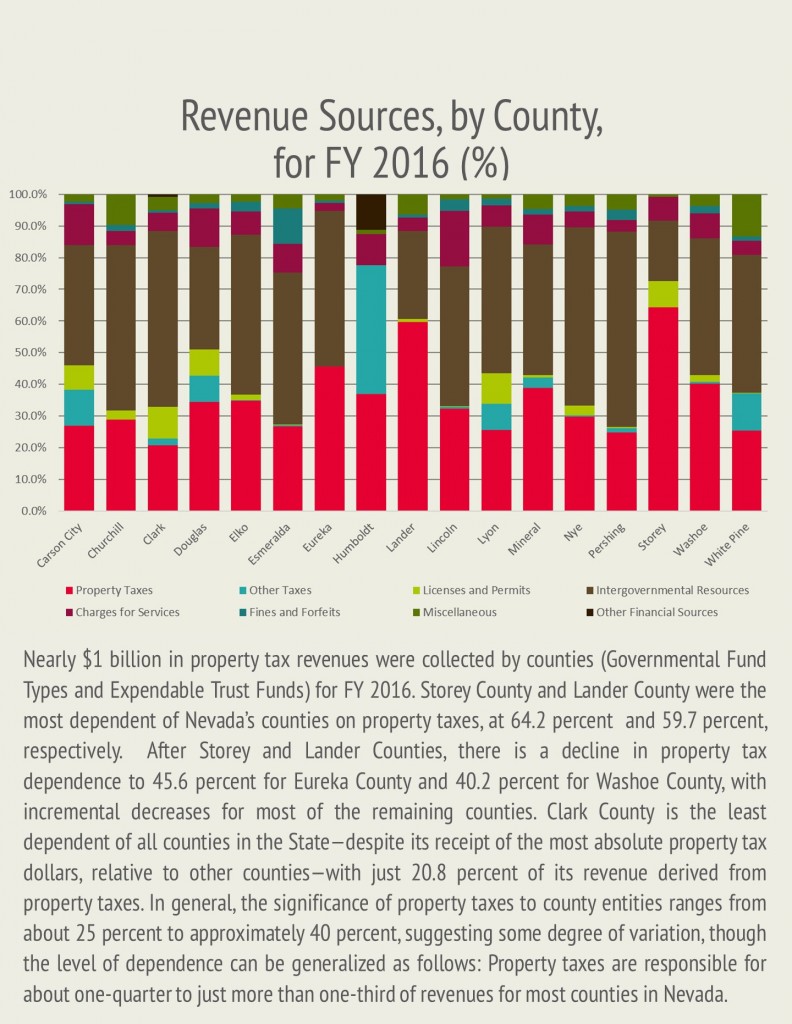 Nearly $1 billion in property tax revenues were collected by counties (Governmental Fund Types and Expendable Trust Funds) for FY 2016. Storey County and Lander County were the most dependent of Nevada’s counties on property taxes, at 64.2 percent and 59.7 percent, respectively. After Storey and Lander Counties, there is a decline in property tax dependence to 45.6 percent for Eureka County and 40.2 percent for Washoe County, with incremental decreases for most of the remaining counties. Clark County is the least dependent of all counties in the State—despite its receipt of the most absolute property tax dollars, relative to other counties—with just 20.8 percent of its revenue derived from property taxes. In general, the significance of property taxes to county entities ranges from about 25 percent to approximately 40 percent, suggesting some degree of variation, though the level of dependence can be generalized as follows: Property taxes are responsible for about one-quarter to just more than one-third of revenues for most counties in Nevada. 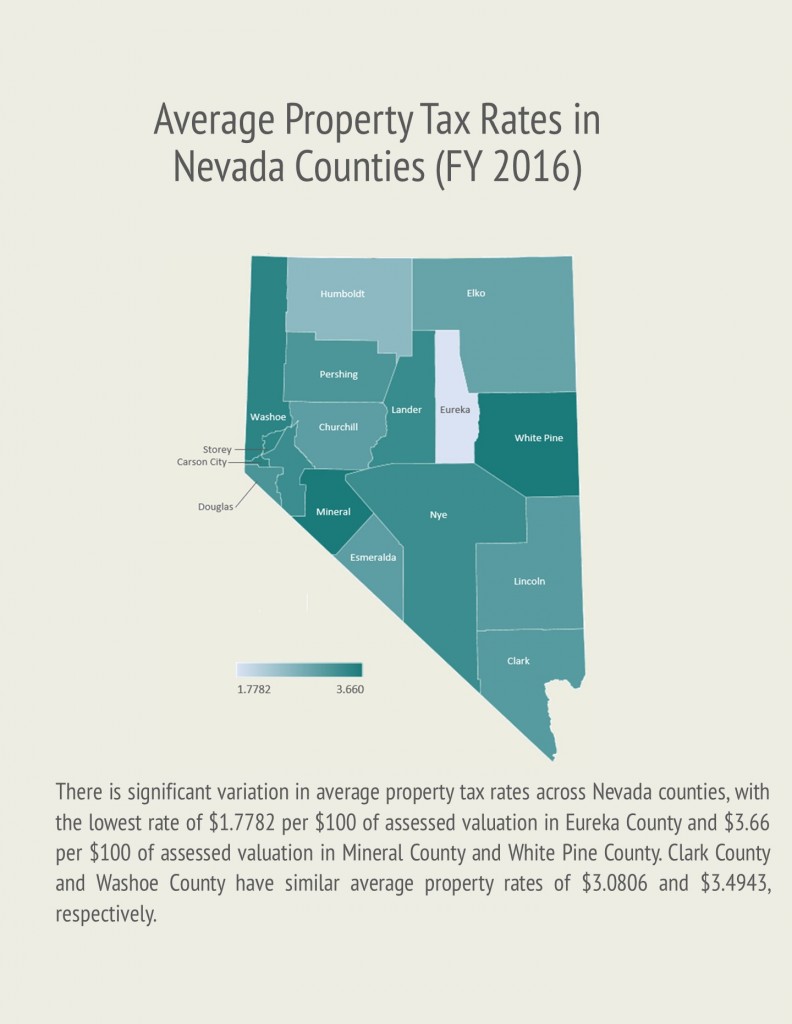 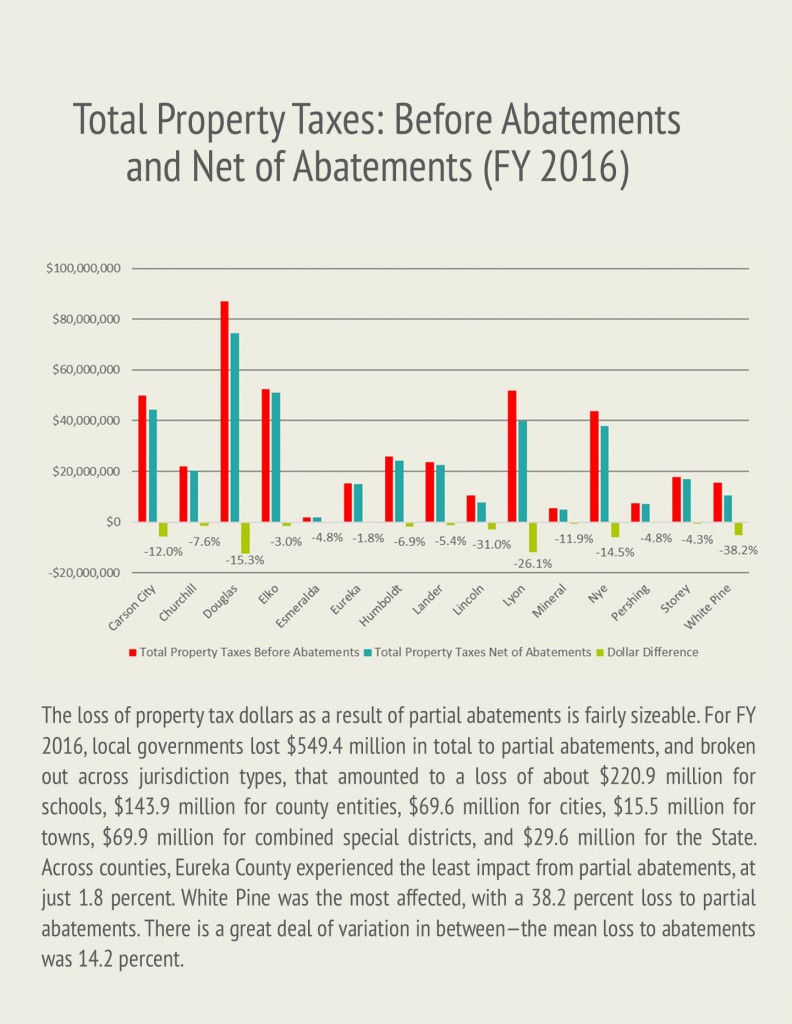 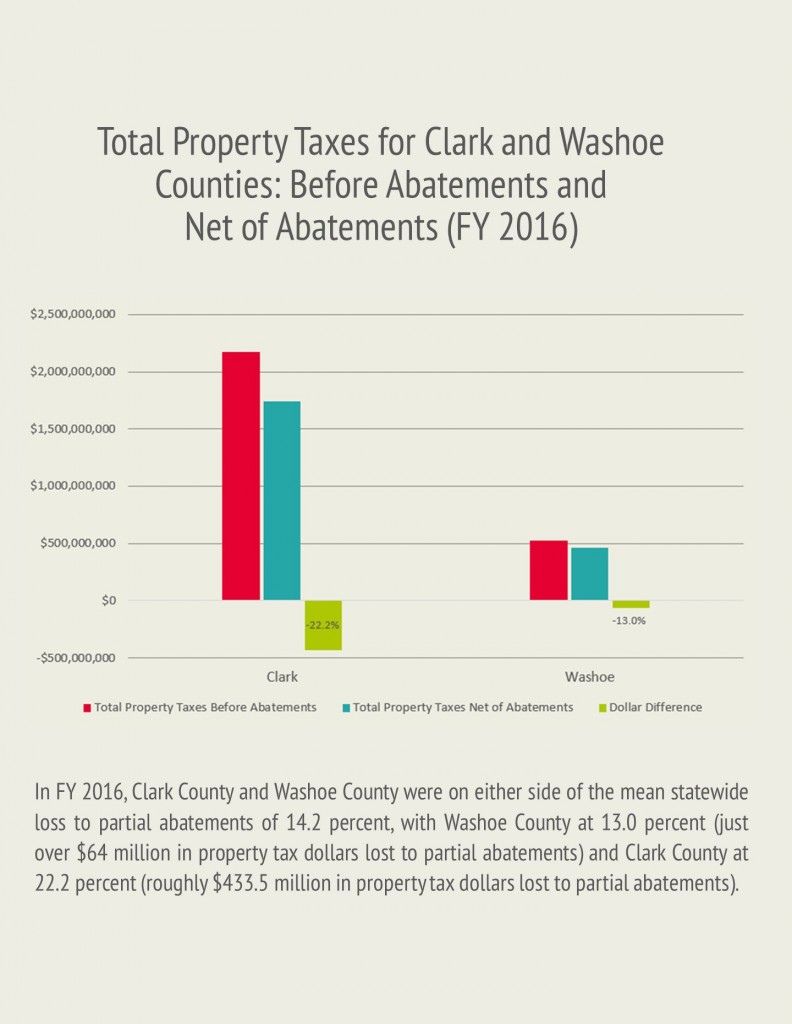 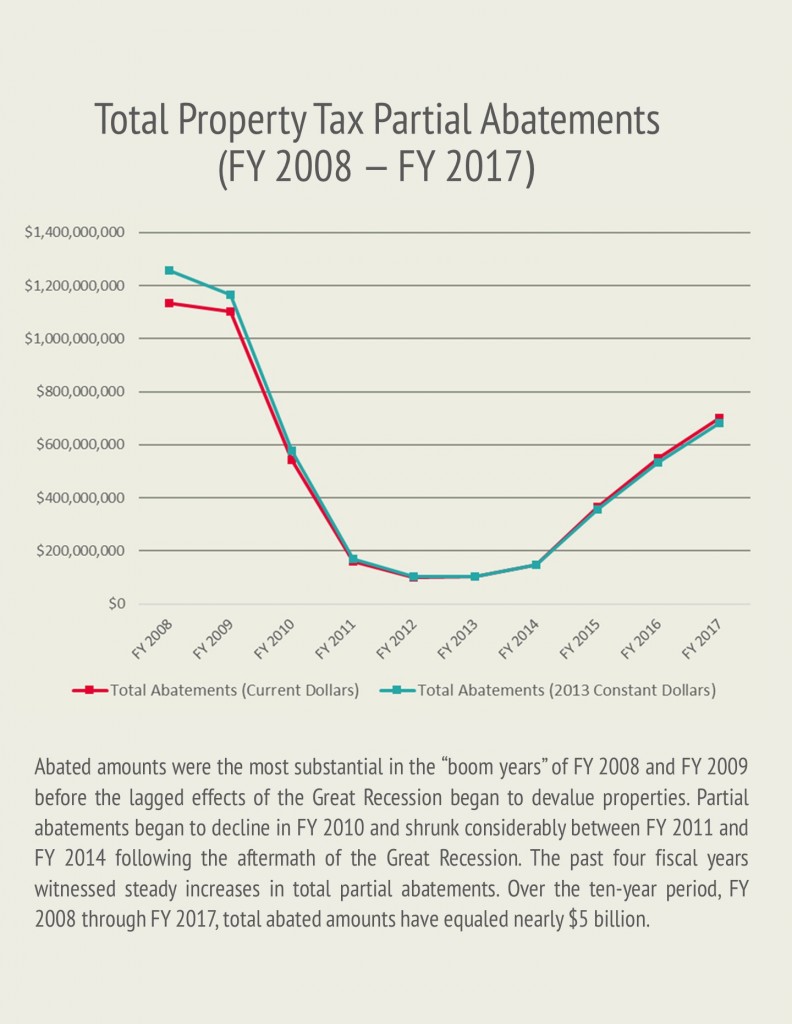 Abated amounts were the most substantial in the “boom years” of FY 2008 and FY 2009 before the lagged effects of the Great Recession began to devalue properties. Partial abatements began to decline in FY 2010 and shrunk considerably between FY 2011 and FY 2014 following the aftermath of the Great Recession. The past four fiscal years witnessed steady increases in total partial abatements. Over the ten-year period, FY 2008 through FY 2017, total abated amounts have equaled nearly $5 billion.