Earlier this month, WalletHub released its ranking of Best and Worst States for Health Care. Nevada ranked #42 out of 51 states and the District of Columbia, and behind all Intermountain West states (see Table 1). States were assessed along three measures: cost, access, and outcomes. Nevada ranked #47 in cost, #50 in access, and #28 in outcomes. 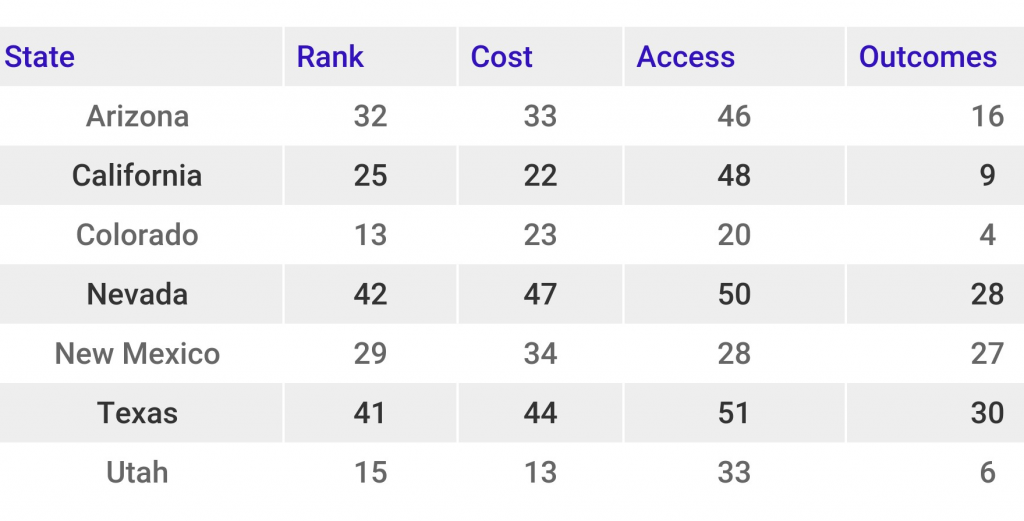 In terms of cost, Arizona and New Mexico ranked #1 and #2, respectively, as having the lowest average monthly insurance premiums.

In terms of access, Utah (#47), Arizona (#49) and Nevada (#50) ranked among the 5 worst states for having the fewest hospital beds per capita. Similarly, Utah (#47) and Nevada (#49) rank at the bottom of physicians per capita. California (#1) and Texas (#5) are national leaders in having the highest percentage of medical residents retained following the completion of their program. However, California has one of the lowest rates (#48) of physicians who accept Medicare.

New Mexico (#47), Nevada (#49) and Texas (#51) have the lowest percentage of insured adults aged 18-64. However, a recent report, published by the Georgetown University Center for Children and Families and the University of North Carolina Rural Health Research Program, noted that New Mexico and Nevada are among the top 5 states with the greatest decline in the percent of uninsured adults in small towns and rural areas (over period 2008-2009 and 2014-2015).

Similarly, Arizona (#48), Texas (#50), and Nevada (#51) are among the worst 5 states with respect to the number of children (aged 0-17) who have insurance. Again, the same Georgetown report noted that Nevada and New Mexico are among the top 5 states that realized the greatest decline in the rate of uninsured children in rural areas (over the period 2008-2009 and 2014-2015).

This week, the nonprofit Nevada Medical Center released its own health care report card, which drew similar conclusions about the state of health care in Nevada, giving the Silver State a D.  Nevada earned an “F” in health care access, given the low insurance coverage and primary provider rates. The Silver State earned a C in each of the remaining categories:  chronic disease, nutrition and activity, mental health, and substance abuse.

Opportunities for Improvement
Congress and the Federal government can support local efforts to strengthen health care infrastructure in Nevada and the Intermountain West region states. Congress should avoid passing health care policy reforms that rollback Medicaid expansion. The majority of Intermountain West region states – except for Texas and Utah – expanded Medicaid, which has provided health care coverage to more than 5 million individuals in the region. This week, Nevada Congresswoman Jacky Rosen and Congressman Ruben Kihuen expressed support for the Resident Physician Shortage Reduction Act (proposed earlier this year by Congressman Joe Crowley (NY), which, if passed, “would increase the number of Medicare-supported residency positions.” This could likely help states like Arizona, Nevada, Texas and Utah address their low primary care provider rates.  Several states are also experimenting with innovative programs to expand access to affordable and convenient healthcare, particularly in rural areas. Many of these involve telemedicine apps (e.g., RelyMD, Teladoc, LiveHealth Online, DoctorOnDemand, HealthTap, etc). In North Carolina, RelyMD is now working with community health centers in North Carolina, to extend after-hours care when these facilities are closed.