While economic data show promising signs of recovery from the Great Recession throughout the country and in Nevada, a new research brief from the Urban Institute and Consumer Credit Research Institute provides another indicator of why the Silver State continues to lag in its efforts to rebound from those difficult times.

Two things to note about the study: first, low income consumers are underrepresented in the study because adults without a credit file (about 9 percent of the U.S. population) are more likely to be financially disadvantaged. Second, the analysis excludes payday or pawnshop loans that are outside the primary financial system. These exclusions suggest that the debt problem in Nevada may be even worse than reported in the study.

Debt in collections results from individuals not paying a bill such as credit card payments, medical or utility bills, parking tickets and other assessments that show up on credit reports. The report notes that debt reported in collections can remain on a person’s credit report until it is seven years past due, further limiting access to capital and traditional credit.

As shown in Figure 1, within the Intermountain West region, Nevada had the highest percentage of people with reported debt in collections, followed by Texas at 45 percent. The other states ranged from 29 percent in Utah to 41 percent in New Mexico. 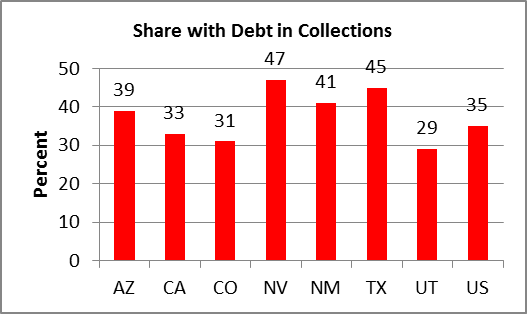 Figure 2 shows the average amount of debt in collections within the Intermountain West states with Nevada leading the way. The other states’ averages were closer to the national average of $5,178, ranging from $4,900 in New Mexico to $5,837 in Colorado. 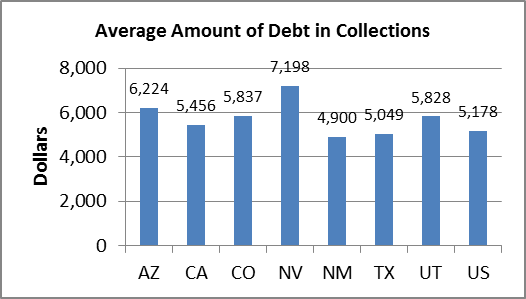 Delinquent debt has serious current and future impacts since credit report information is used in determinations for jobs, rental housing and mortgages, insurance premiums, and access to credit in general and its price. “High levels of delinquent debt and its associated consequences, such as limited access to traditional credit, can harm both families and the communities in which they live.”

Delinquent debt also impacts the business community and restricts economic growth. As noted in a recent Las Vegas Review Journal editorial, these numbers adversely affect businesses that are not getting paid and do not account for the many small businesses that simply write off those losses without committing the time and expense of dealing with a collection agency.

Recent legislative actions in Nevada have addressed some issues related to debt. Legislation adopted in the 2013 Session prohibits employers, with certain exceptions, from conditioning employment based on a consumer credit report (SB 127 encoded in Nevada Revised Statutes (NRS) 613.520–613.600). The concept of “high interest loans” was placed in the statutes (NRS 604A.407) with the enactment of AB 478 in the 2007 session. This law provides more transparency for such loans but did not regulate the interest rate.

While recent legislation begins to extend some critical protections, policymakers should explore ways to continue strengthening asset development opportunities. The Guinn Center for Policy Priorities is currently doing research in the area of debt, asset development, and economic security.