by Meredith A. Levine and Hannah Munro

Nestled in a basin surrounded by snow-capped peaks, Lake Tahoe stuns sightseers with its kaleidoscopic colors, which fall on a spectrum of deep emerald to rich turquoise. Its extraordinary beauty and wide assortment of recreational options make Lake Tahoe an attractive tourist destination, with about three million visitors each year. Lake Tahoe’s splendor has been something of a double-edged sword, however, as a persistent decline in environmental quality has troubled conservationists for nearly 150 years.

Concerns over the health of Lake Tahoe date as far back as 1873, when citizens began to question the impact of the lumber industry on the surrounding forests, as large fires became prevalent. Since that time, additional problems have mounted, as development transformed the region. Questions regarding the sustainability of Lake Tahoe emerged in the 1950s, as deterioration of water quality, air pollution, loss of wildlife habitat, and degradation of scenic areas were attributed to development. For environmentalists, the most salient matter was the ecological health of Lake Tahoe itself.

A discussion on the status of Lake Tahoe’s environmental quality and recent efforts to preserve and improve its vitality follows.

One of the most oft-used measures of water health is water clarity. Analysts have observed a decline in Lake Tahoe’s water quality over time, citing “land disturbance associated with increasing resident and tourist populations, air pollution, soil erosion, roads and road maintenance, and loss of natural landscape capable of infiltrating runoff and sediments” as contributing factors.

Researchers at the University of California, Davis’s Tahoe Environmental Research Center (TERC) have conducted continuous monitoring of the lake since 1968. They have compiled data on water quality since that time, as well, using a measure known as Secchi depth, using a tool called a Secchi Disk, which is defined as, “an instrument commonly used for measuring the lake’s clarity. It is a round, dinner-plate size disk that is lowered into the water. Once it can no longer be seen in the deep water, a scientist measures how far down in was lowered to determine the water’s clarity.”

Figures 1A and 1B display average Lake Tahoe Secchi depths for winter and summer, respectively, from 1968 through 2017, along with annual averages. Note that, as water clarity increases, so too does the measurement (in feet). 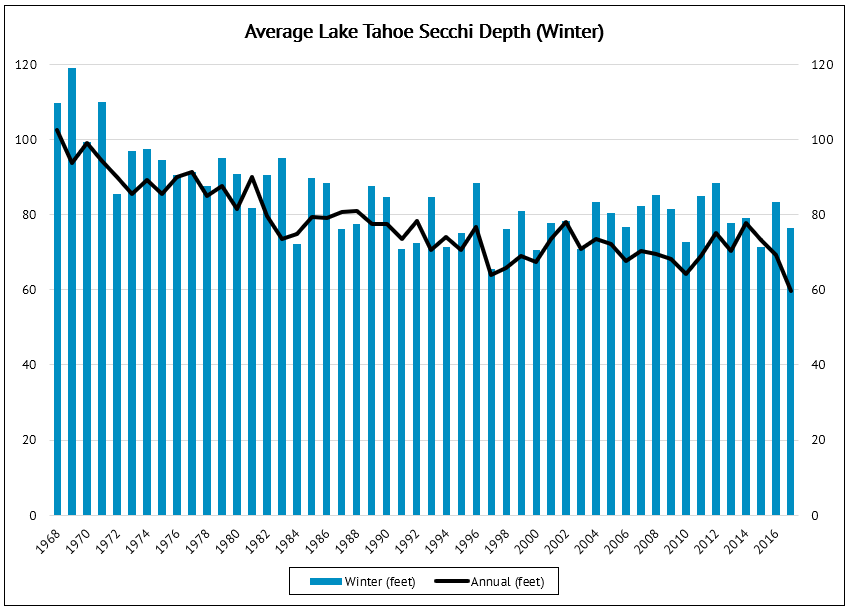 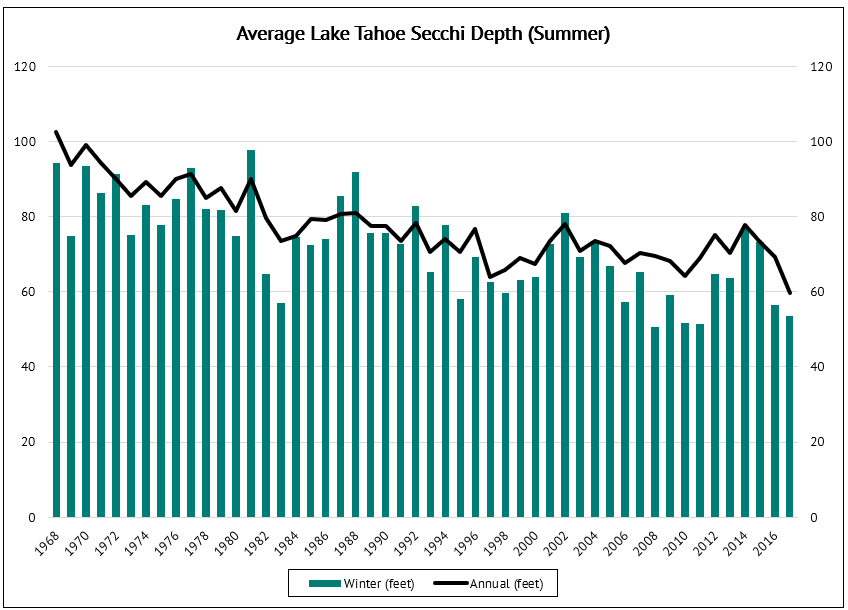 As Figures 1A and 1B show, while water clarity has experienced sporadic improvements over the time frame in question, at no point has it regained its 1968 level for the annual average (102.4 feet) or the winter average (109.6 feet). The summer average for 1981, 97.8 feet, did exceed the 1968 level of 94.2 feet, though that is the only exception. For all three metrics, there has been a percent decrease from the first year of monitoring, 1968, to the last year of observation, 2017. The percent change between 1968 and 2017 for the annual average is a decrease of 41.7 percent; for the winter average, it is a decrease of 30.2 percent; and for the summer average, it is a decrease of 43.2 percent.

The non-profit Tahoe Fund, which is registered in Nevada and California and which emphasizes recreation, conservation and education has observed, “Tahoe has lost about one-third of its world-renowned clarity since 1968. The major component of clarity loss is fine particles, with nearly three-quarters originating from development-impacted watersheds. Another important pollutant is nitrogen, over one-half of which comes from atmospheric fallout created by vehicle exhaust and pollution blown in from surrounding urban areas. A third critical pollutant is phosphorus, with disturbed and natural watersheds contributing two-thirds of the load.”

Moreover, TERC researchers have noted that the 2017 water clarity levels are the lowest annual average on record: the annual average of 59.7 feet is 4.3 feet lower than its previous low, which was recorded in 1997 at 64.0 feet. TERC researchers have cautioned, however, that 2017 may be an aberration insofar as “drought and heavy rainfall in 2017 washed 12,000 tons of sediment into the lake”; they continue to monitor Lake Tahoe for the resumption of normal trends.

A diverse array of stakeholders has contributed to recent efforts to improve Lake Tahoe’s health. Many non-profits, including the aforementioned Tahoe Fund and the League to Save Lake Tahoe—a collaborative educational and advocacy group known for its slogan “Keep Tahoe Blue”—provide time and financial resources to support protection and conservation initiatives.

There is a federal interest through the U.S. Forest Service, an agency of the U.S. Department of Agriculture (USDA), which acquired “36,000 acres of land in the basin between 1965 and 1980.”

The lake does not sit neatly within the boundaries of a single state: in fact, it bestrides the Nevada-California state line, with about two-thirds of Lake Tahoe situated within California and the other one-third within Nevada. This means that each state has a governance stake in Lake Tahoe and, accordingly, contributes money toward sustainability, restoration, and enhancement of the lake. In 1969, Congress ratified a bi-state compact that was approved by California and Nevada, which established the Tahoe Regional Planning Agency (TRPA). For fiscal year (FY) 2019, Nevada appropriated about $14.4 million in funding to TRPA. Its authority as a planning agency allows it to “exercise effective environmental controls and perform other essential functions over the water, land, air, wildlife and development of the Lake Tahoe region.”

The Environmental Improvement Program (EIP)—a partnership of federal, state, and local agencies, private interests, and the Washoe Tribe, which was initiated in 1997—implements projects to improve the sustainability of Lake Tahoe. Program areas include: watersheds, habitat, and water quality; forest management; air quality and transportation; recreation and scenic resources; applied science; and program support. Figure 2 displays investment by funding sector for 2010 through 2017. 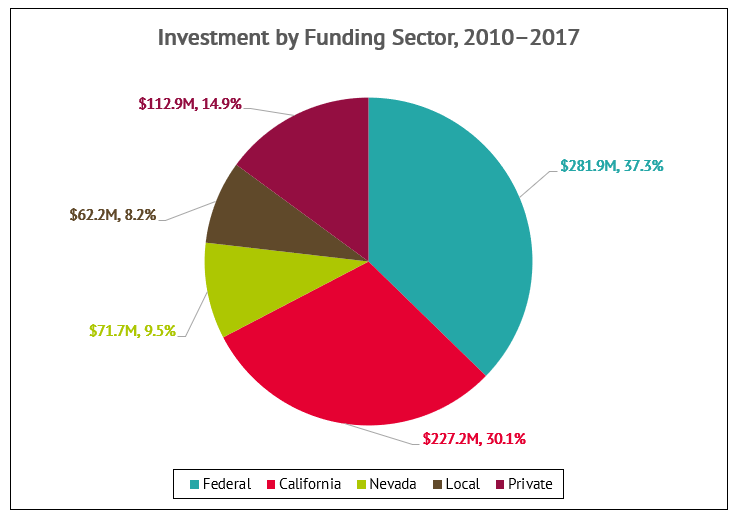 Over the eight-year period, Nevada contributed about $71.7 million, or about 9.5 percent, to EIP projects. The federal government was the largest contributor, at approximately $281.9 million (37.3 percent), followed by California, with roughly $227.2 million (30.1 percent).

In 2016, a bipartisan piece of legislation, which was co-sponsored by Senators Dean Heller and Harry Reid of Nevada, Senators Dianne Feinstein and Barbara Boxer of California, Representative Mark Amodei of Nevada, and Representatives Tom McClintock and John Garamendi of California, was signed into law by then-President Barack Obama. The Lake Tahoe Restoration Act authorized $415 million in federal money for, amongst others: hazardous fuels reduction projects; stormwater pollution reduction projects; improvements to water quality; mitigation of aquatic invasive species; and reintroduction of native Lahontan cutthroat trout.

While federal and state governments can provide policy guidance and financial resources to support management of Lake Tahoe, residents and tourists also have a critical role in the ongoing stewardship of this public treasure.