In the study, Nevada ranked 45th overall, with individual dimensions rankings of 44th in Affordability, 45th in Education and Health, 41st in Quality of Life, 7th in Economic Health, and 50th in Civic Engagement. Comparatively, Nevada underperforms among most metrics both nationally and within the Intermountain West Region. As a region, with exception of Utah and Colorado, the Intermountain West generally falls below the national average.

However, on a positive note, both Nevada and the Intermountain West demonstrate strong Economic Health; with three states within the top 10, Colorado (2nd), Utah (6th), and Nevada (7th); and one additional state in the top half, Arizona (18th).

Nevada’s high Economic Health score likely can be attributed in part to the Silver State’s low unemployment rate, which has fallen steadily since the Great Recession (see Figure 1). Additionally, Nevada scores high marks given that its students have relatively low levels of student debt; Nevada ranks 40th in the country in median student loan debt, which is lower than most Intermountain West states (except Utah) and the national average (see Figure 2). 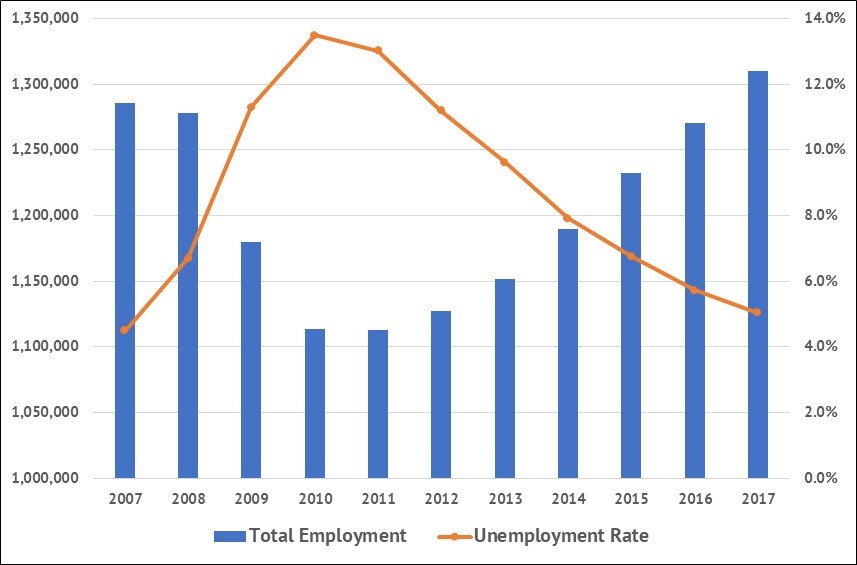 Nevada’s strong Economic Health rating stands out as an anomaly when compared to the other nine high-ranking states in that category. Nevada, with a grade of 42.41, has the lowest overall grade of all other similarly ranked states in economic health, which boasts an average combined overall grade of 56.56.

A closer look at the data reveals that Nevada’s scores in the categories of Affordability, Education and Health, and Civic Engagement are pulling down its overall ranking. Housing affordability, in particular, is an issue on the minds of many Nevadans. The growing demand for a limited stock of housing and apartments in Nevada’s urban areas, and the resulting steady increase in home prices and rents is affecting Millennials, and everyone else (e.g., workers, low-income families, and seniors). This policy challenge prompted the Nevada Legislature to commission the Interim Committee to Study Issues Regarding Affordable Housing (Senate Concurrent Resolution No. 1, 2017). The Nevada Legislature is currently deliberating more than one dozen bills related to housing and homelessness (see Table 3). 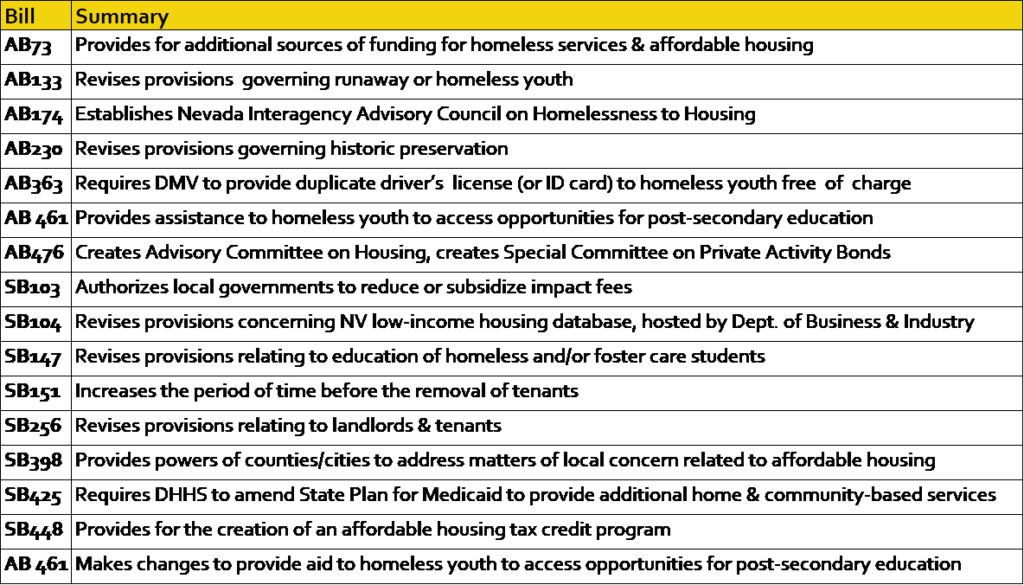 Nevada’s lowest grade is in the category of Civic Engagement. Currently, the Nevada Legislature is considering several bills that could strengthen Millennials’ interest in participating in the democratic process. Among these are bills that would enact same-day voter registration, extended early voting, and increased access to polling locations. Collectively, these measures could help improve Nevada’s standing on the Civic Engagement metric.

Notwithstanding current legislative efforts, addressing some of these issues, such as affordable housing, access to affordable health care, and educational outcomes, will likely require long-term, integrated, and systems-level solutions. If anything, the WalletHub study merely highlights the already well-documented challenges facing Nevada as it continues to grow. While Governor Sisolak’s administration is only 100 days into his term, it will be interesting to see how Nevada fares four years from now.

One in 5 Nevadans is a Millennial

As of 2017, there were approximately 600,000 Millennials in Nevada. As Figure 4 shows, Millennials, as a share of Nevada’s total population, are the third biggest population group in Nevada, accounting for slightly over one-fifth of the population. Generation X-ers (35-54 years of age) make up the largest share of the population with 27 percent, followed by Baby Boomers (55-74 years of age) with 21.4 percent, and Millennials with 20.9 percent. (The U.S. Census Bureau’s age category that most closely aligns with Millennials (ages 22-38 years) is 20-34 years; similarly Generation X is defined as ages 38-53, and Baby Boomers are defined as ages 54-72).

Figure 4. Millennials, as a share of Nevada’s total population, are the third biggest population group

In recent years, Nevada has experienced tremendous population growth. According to the US Census Bureau, five of the ten states with the largest population percent growth from 2017 to 2018 are in the Intermountain West region: Nevada and Idaho (tied for first, 2.1 percent), Utah (3rd, 1.9 percent), Arizona (4th, 1.7 percent), and Colorado (7th, 1.4 percent). From 2011 to 2017 Nevada’s total population grew 8 percent. As Figure 5 indicates, the growth in Baby Boomers (28 percent) and Millennials (21 percent) drove Nevada’s overall population growth over the period 2011-2017. 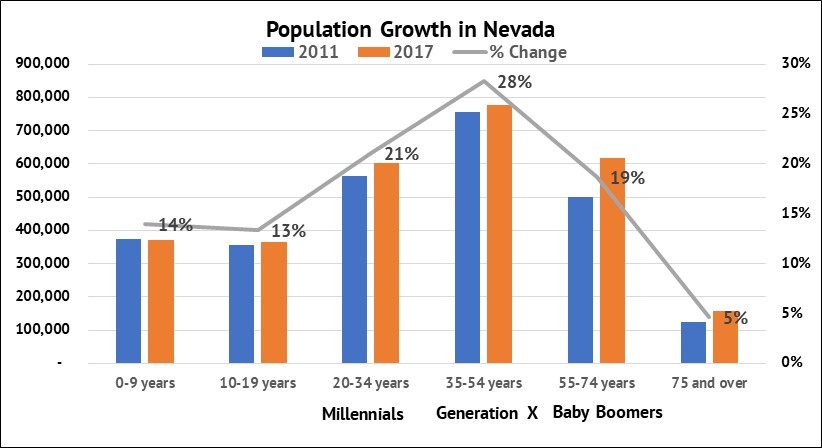 In short, data suggests that Millennials account for a significant share of Nevada’s recent population growth.  But, as the WalletHub study noted, Millennials face significant challenges in Nevada. Whether they stay and build careers and families here in the Silver State will depend, in part, on how well political and community leaders are able to address some of the complex policy challenges that affect not only Millennials but many of Nevada’s workers and families, including but not limited to housing, quality health care, quality child care, parks and recreation spots, and strong community and civic institutions.