The number of women behind bars in the United States has grown to nearly 110,000—fourteen times the size of the population of women in jails and prisons forty years ago, says a new study from the Vera Institute of Justice, an organization that examines the country’s criminal justice system. The growth rate for women behind bars also outpaces the overall prison population growth, which is five times larger than it was in 1970.

Much like incarcerated men, women in prison tend to be overwhelmingly minority, poorly educated and low-income. Approximately 64 percent of women in jail are women of color: 44 percent are African American, 15 percent are Latino and 5 percent are of another racial identity. Only 36 percent of the women behind bars are white. Prior to their arrests, six out of ten women reported that they did not have full-time employment.

The medical treatment offered to women in jails and prisons is dismal and inadequate, especially given the limited resources and overcrowding of many county-run jails. As the Vera Institute report explains, “When women do receive care in jail, it is often both inappropriate and inadequate, leading to undetected illnesses, under or over treatment, and potentially worsening overall health for jailed women. Stretched resources can result in dangerous outcomes, including overuse of psychotropic drugs to treat all women experiencing symptoms of mental illness, even where such treatment is not warranted, and lack of evidence-based detoxification therapies, increasing the risk of drug- or alcohol-related death.”

Most of these women have been charged with non-violent crimes, such as drug possession and property crimes. Thirty-two percent of women are incarcerated for property offenses, 29 percent for drug offenses, and 21 percent for public disorder offenses. The report notes that the number of women arrested for drug possession or use tripled between 1980 and 2009, while the arrest rate for men for these crimes only doubled during this time.

Seventy-nine percent of women in jail have young children, and roughly five percent are pregnant. Most of these women are single mothers. As a result, jail time can cause major disruptions for the family unit. As the report notes, “Given that many [women in jail] come from communities blighted by high rates of poverty, crime and low educational attainment, even a short stay in jail may do more than temporarily break up their families. Without the financial means to support their families for the length of their detention and upon their release, these women are very likely to be separated from their children, especially those who are in foster care, for longer than necessary.”

(For further reading on the effects of parental incarceration, see the Guinn Center’s blog, “Mass Incarceration Wreaks Havoc on Families” and the Annie E. Casey Foundation’s report, “A Shared Sentence: The Devastating Toll of Parental Incarceration on Kids, Families and Communities.”)

The researchers say that charging for low-level offenses disproportionately affects women for several reasons. Because women are often the primary caregivers for their children, they are likely to accept plea deals that secure the fastest route to release, regardless of whether they are guilty. Second, women who are involved in complex cases often committed crimes on the periphery of a larger case, which gives them less negotiating power to secure a favorable plea deal.

What is especially troubling about the Vera Institute’s findings is that, while the population of women in jail has grown exponentially, the jail system is typically designed for men because they comprise the majority of the incarcerated population. This exacerbates the dismal outcomes for women, including negative effects on their physical and mental health, their finances and their families. Furthermore, little data has been collected on the effects of incarceration on women, despite the explosion in the number of women in jails.

In Nevada, 13,941 people are currently behind bars, and of those 1,258, or 9.0 percent are women, according to statistical facts released by the Nevada Department of Corrections (NDOC) on June 20, 2016. Nationally, slightly less than 15 percent of all people in prisons are women, a higher rate than Nevada.

An August 2015 profile of inmates in Nevada’s prisons found that 77.6 percent of women who were new prison intakes had committed drug or property crimes. Less than 20 percent had committed a violent crime. During 2016 and 2017, 85.6 percent of incarcerated women in Nevada are serving their sentences in a minimum or medium security facility.

Approximately 0.09 percent of the women living in Nevada are in prison, according to the U.S. Census Bureau’s 2015 population estimates. This figure is somewhat higher than the 0.07 percent nationally. The number of women behind bars is expected to increase by 1 percent every year for the next ten years, according to a 2015 study commissioned by the NDOC.

All 17 of Nevada’s counties also have their own jail or detention center, and the above data only reflects the state-run prisons, which suggests that the number of women in the state who are currently behind bars may be actually larger. 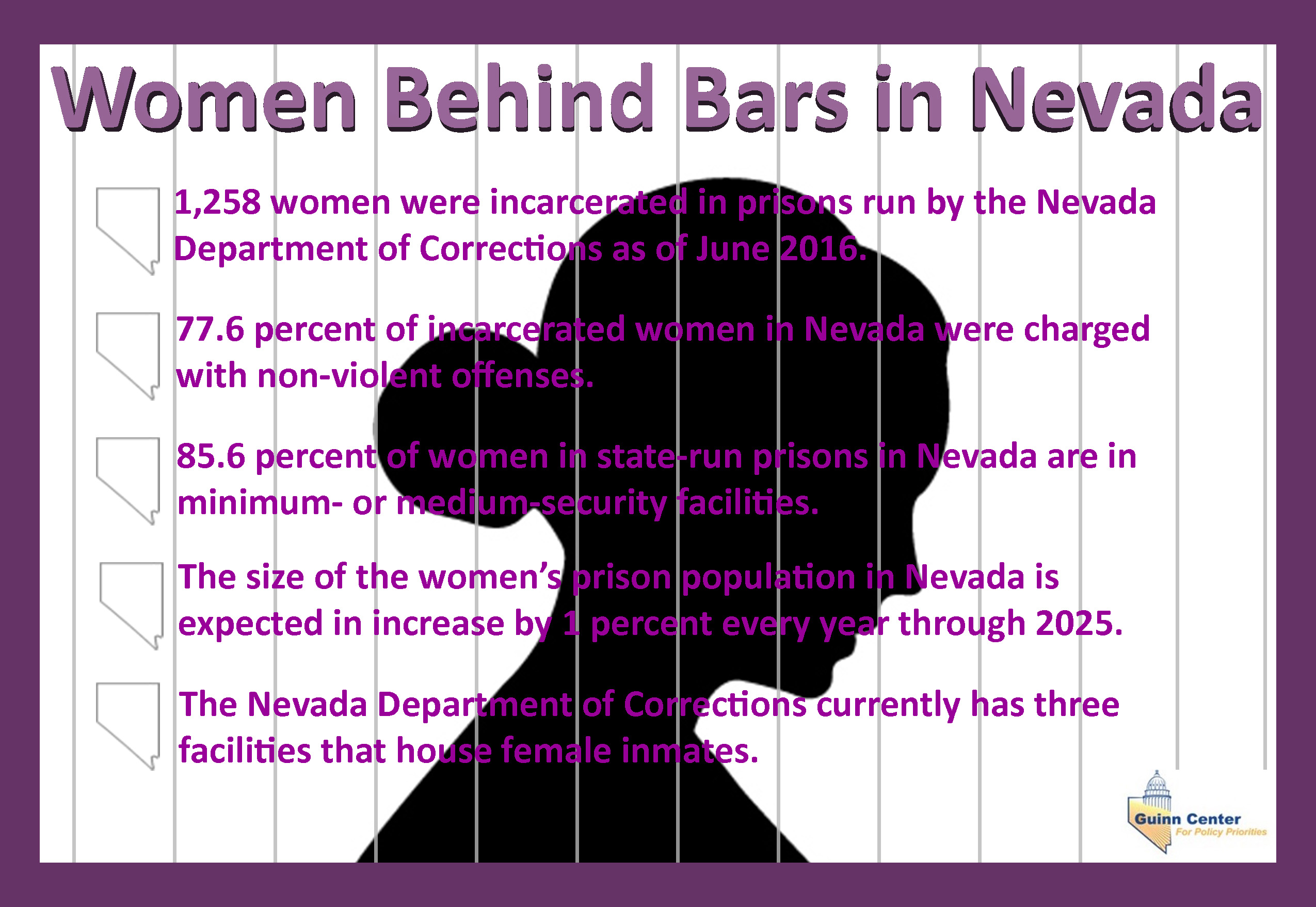 Policy-makers in Nevada may want to consider addressing the following critical issues facing women in the state’s jails and prisons:

In addition, increasing the number of mental healthcare providers in Nevada could benefit not only the state’s incarcerated population but it could also help patients outside of prison walls. The Community Mental Health Forum sponsored by UNLV recently discussed ways Nevada can better help and protect children in crisis, including increasing the number of qualified mental healthcare providers for children and a more streamlined system of providing referrals.