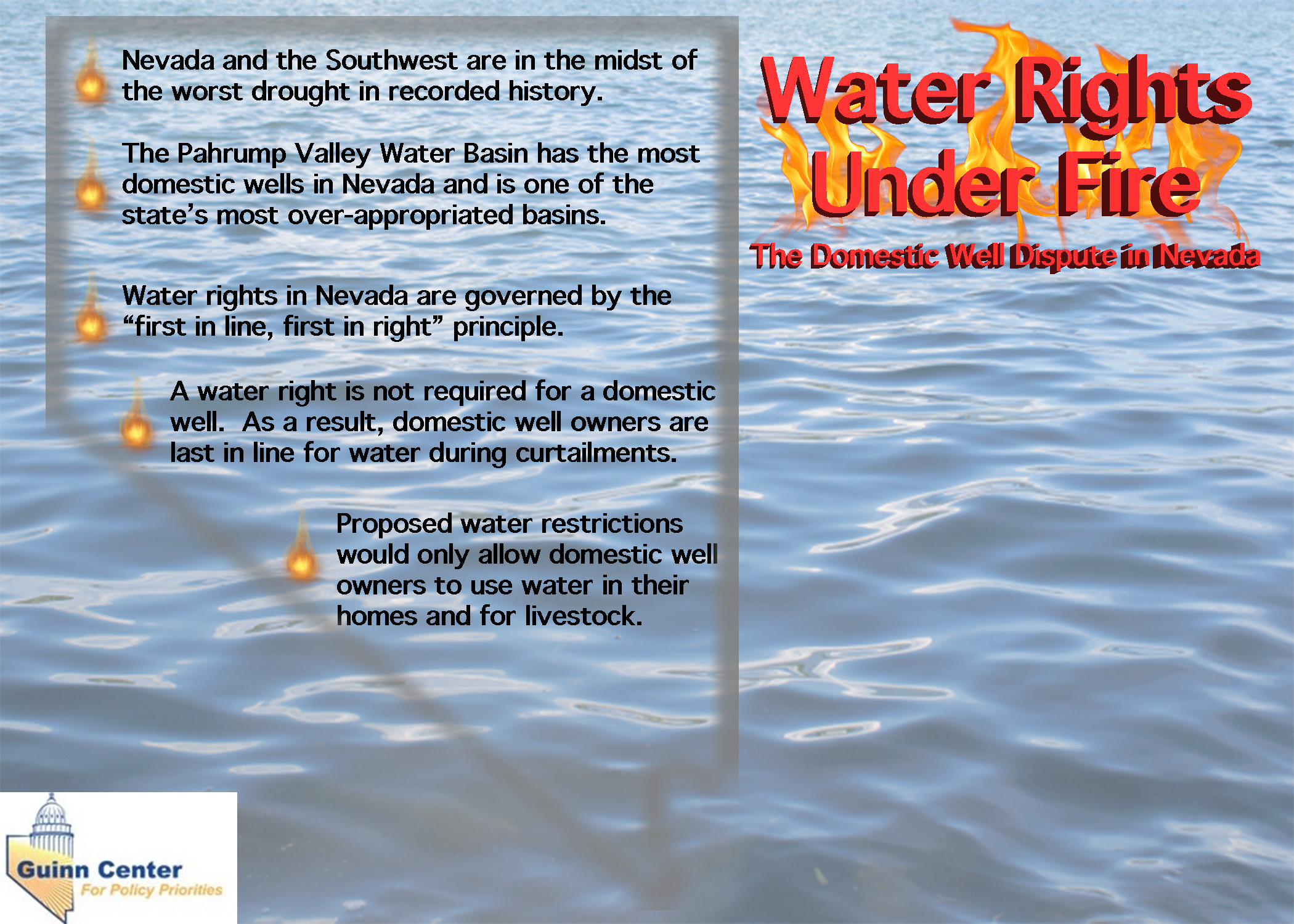 As the wildfires that engulfed thousands of acres across the Southwest this summer are dying down, a different type of fire is consuming the members of Legislative Commission’s Subcommittee to Study Water and the Nevada State Engineer for the Division of Water Resources, Jason King. On August 26, hundreds of Nye County residents gathered at the committee’s meeting in Carson City to protest proposed changes to the laws governing well water usage in Pahrump Valley and across the state.

The most contentious changes proposed at last week’s meeting would have required all wells in the state to be metered and to curtail water usage in times of a shortage. Dozens of domestic well owners spoke during public comment at last week’s hearing against these potential bill draft requests (BDRs) from the committee. The well owners, of which there are about 11,000 in Nye County, argue that they could potentially lose their access to water.

First, Nevada Revised Statutes 533 and 534 state that a water right, a formal application through the Division of Water Resources that grants the person a legal right to drill a well, is not required for domestic wells. Technically, this means that domestic well owners do not have a formal right to water, although it has been an unwritten rule for years that each domestic well can pump up to two acre-feet per year.

Nevada water rights are governed by the principle of “first in line, first in right.” This principle stipulates that the most senior rights have first rights in times of crisis, followed by more junior water rights. Because they do not have a legal water right, domestic well owners are last in line to receive water if water restrictions are authorized. Many well owners fear this means that they will not receive any water at all.

Second, because the State Engineer has the right to limit water use, this person has the authority to reduce the amount of water used by domestic well owners. At last week’s meeting, King presented a recommendation to the committee that would limit domestic well water usage only for indoor use and livestock. A September 2015 report from the Nye County Water District states that half an acre-foot would be sufficient for most domestic well owners in the area, one-and-a-half acre feet less than they are currently allotted. King’s recommendation did not include a change to the two acre-feet allotment. Still, Nevada Assemblyman Ira Hansen (R), who represents several of the state’s rural counties, said King’s recommendation would hinder residents’ abilities to maintain their trees and landscaping.

Many residents are also upset about how water rights in Nye County have been appropriated. In 2015, Acres Medical, a medical marijuana company, purchased 37 acres of land in Amargosa Valley. The Nye County Board of Commissioners granted the business a special permit after it promised to turn the land into a cultivation facility, which would bring new jobs to the area. However, the company is instead trucking the water from Nye County to its cultivation facility in Las Vegas. Domestic well owners say that their way of living and livelihoods are endangered by such businesses, which bring no benefit to the local economy.

Problems Exacerbated by the Drought

Governor Brian Sandoval convened the Nevada Drought Forum in 2015 to help develop policies around conservation in the state. Right now, Nevada and the rest of the Southwest are in the midst of the worst drought in recorded history:

The United States Department of Agriculture has called the effects of the drought on Nevada’s farmers “a natural disaster.” Because of this, many of the state’s famers are eligible for emergency loans through the U.S. Farm Services Agency.

Most people at last week’s water hearing acknowledged that the Pahrump Valley Water Basin—and much of the state’s water supply—is over-appropriated, and therefore, steps must be taken to protect the current residents and ensure future development.

First, the Subcommittee to Study Water has said that it will support a BDR during the 2017 Legislative Session that provides some protections for domestic well owners, particularly their right to use water in their homes and for their livestock.

The Nye County Water District made the following recommendations in its Groundwater Management Plan that can also help offset the water shortage crisis:

Similarly, the Nevada Drought Forum made the following recommendations for the state: