Between now and November 2016, a statewide initiative petition to amend an existing Nevada statute is being circulated among Nevada voters to change the identification requirements for voters at the polls. The petition, known as The Initiative to Require Voter ID, or the Voter ID Act, seeks to amend Nevada Revised Statute (NRS) 293.277. It would require a registered voter who wishes to vote in person to present photographic proof of identity to the applicable election board officer.

The initiative would also require government entities (such as the Nevada Department of Motor Vehicles to provide a voter identification card at no charge to a person who is registered to vote and who does not already have a U.S. (or federally recognized Indian tribe) government-issued card that:

The voter identification cards would include: the name, address, date of birth, photograph, and signature of the person to whom the card is issued. The card would be considered valid for as long as the person is registered to vote and resides at the address on the card. Current voter registration cards do not have a photo on them, and thus, could not be used as proof of identity.

Does Nevada Have a Problem with Voter ID Fraud?

Proponents of voter ID laws say that they help prevent instances of voter fraud. People can register under the names of deceased citizens, register in more than one jurisdiction, vote without citizenship, vote under false identities, or cast ballots for a person who is too mentally impaired to vote on his or her own. These practices, they say, erode the foundations of democracy. Moreover, because other laws require citizens to present photo ID, including buying beer or cigarettes, getting married and getting on a plane, voting—a practice with serious implications for the country—should be held to the same standard.

Former State Assemblywoman Sharron Angle (R), who is listed as the initiative’s sole proponent, testified during a meeting of the Assembly Committee on Legislative Operations and Elections that her work with the website ElectionCorruption.com found a number of anomalies, activity that was “not easy to explain” and anecdotal evidence of fraud from poll workers in Nevada. The organization believes election corruption in the state is 3 percent.

However, researchers at the Brennan Center of Justice at New York University School of Law said that restrictive identification requirements address a voter fraud “more rare than death by lightning.” Between 2000 and 2011, there have only been 633 cases of voter fraud nationwide. In Nevada, only four cases of voter fraud have been reported in recent years. In 2014, a Las Vegas area woman faced seven charges, including two felony counts, for registering to vote twice under a false name, and a Washoe County woman who was living in the United States illegally was arrested for registering to vote under a false name and casting ballots in the 2008 and 2010 elections. And an elderly man in 2014 mistakenly tried to vote a second time, having forgotten he had already cast a ballot. More recently, during the June 2016 primary, a Republican woman working for Engage Nevada, a conservative outreach group, was arrested and charged with 11 felony counts for falsely registering voters as Republican.

Who is most likely to be affected by Voter ID laws?

As many as 65,000 voting-age Nevadans are believed to lack the type of identification described in the initiative. Research into voter identification laws has overwhelmingly concluded that such laws disenfranchise people who are African-American, Latino, of mixed race, foreign-born, disabled, young (age 18 to 23), elderly, women, and who have low educational attainment and/or are low-income wage earners.

Table 1 shows the percentages of the population in Nevada that fall into these groups, according to 2015 data from the U.S. Census Bureau.

Table 1: Segments of the Nevada Population that May Be Affected by Voter ID Laws 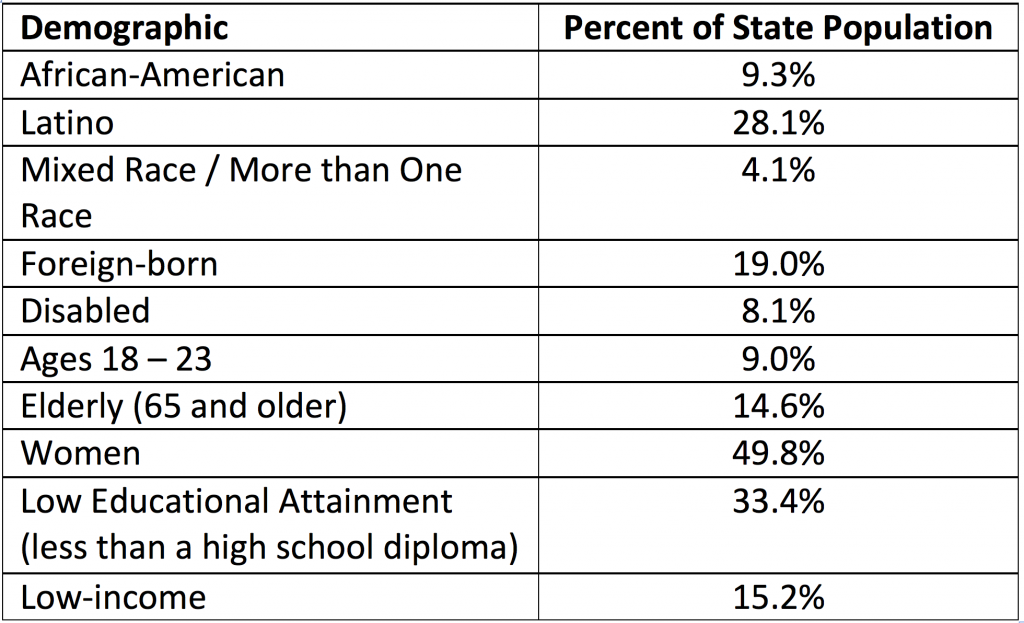 Critics of Voter ID laws argue that voting is a fundamental right for all citizens of the United States and that right is protected not only by the Constitution but also by a number of Federal and state laws and Supreme Court rulings. Critics of voter ID laws argue that the requirements are essentially an extension of the historical property requirements and poll taxes that were purposely designed to limit certain individuals, specifically the poor and former slaves from casting votes. Voter ID laws, they say, should not be subject to an economic test or be limited to people of certain means and violate the 24th Amendment of the U.S. Constitution, which declared it unlawful to charge citizens a tax to vote at the polls.

Opponents also claim that those who support voter ID laws are often doing so for reasons other than the altruistic ones they cite, such as upholding democracy and preventing fraud. For example, report in the Harvard Law Review states that support for voter ID laws often aim to suppress Democratic-leaning minority voters and are motivated by racial discrimination. Moreover, election officials have been found to ask individuals of Hispanic heritage or with Hispanic names to present photo ID at the polls more often than their non-Hispanic counterparts.

Is there support for Voter ID Laws?

Seventy-five percent of Americans support requiring voters to show photo identification at the polls to cast a ballot, including 85 percent of Republicans, 63 percent of Democrats and 77 percent of people with no political party affiliation, according to a public opinion survey conducted by Rasmussen Reports. That same survey found that only 18 percent of people disagreed and oppose such a requirement.

Thirty-three states in the U.S. currently require voters to present some form of identification at the polls. The laws in these states vary: some states strictly require a photo ID, some strictly require a non-photo ID, some may request a photo ID, and some may request an ID, not necessarily one with a photo. Of these states, eight currently have laws that require a voter to present a government-issued photo ID at the polls in order to vote (much like the initiative in Nevada): Georgia, Indiana, Kansas, Mississippi, North Dakota, Tennessee, Virginia, and Wisconsin.

Supporters of voter ID laws believe that the number of eligible voters who lack valid photo identification is far lower than opponents estimate. For example, a lawsuit filed after Georgia passed its voter ID law was dismissed in a lower court because the plaintiffs could not provide evidence that any already-registered voters would be barred from voting because they lacked a photo ID. Between 2007 and 2011, the years immediately after the law was enacted, the Georgia Department of Driver Services reported an average of 4,758 people obtaining a Voter ID. The highest number recorded was 12,332 in 2008, the year of a presidential election. In total, the number of voters who sought a voter ID from the agency in that time frame was less than 0.5 percent of the total registered voters.

The question of voter identification is become an increasingly popular cause among many Republican lawmakers nationwide, including several prominent politicians in Nevada. Governor Brian Sandoval has expressed his support for Voter ID laws. Shortly after she took office, Secretary of State Barbara Cegavske’s office told the Las Vegas Review-Journal in January 2015 that voter ID laws were among her top priorities during the upcoming 2015 Legislative Session in Nevada. During the session, three different laws that would have required voters to present photo IDs at the polls (SB169, AB253 and AB266) were proposed. However, none of these bills made it out of committee.

Support for Voter ID in Nevada has even crossed party lines. While in office, Secretary of State Ross Miller (D) issued a press release in support of Senate Bill 63, a bill that sought to upgrade provide election officials with photographs of voters from the DMV database, during the 2013 Legislative Session.

What has happened recently around the country with Voter ID laws?

There are currently 15 open lawsuits that address voter ID laws in states across the U.S. Three high-profile voter ID cases have already been decided this year:

What has happened recently in Nevada with Voter ID laws?

To qualify as an constitutional initiative petition that would appear on the November 2016 General Election Ballot, Our Vote Nevada would have needed to obtain the signatures of registered voters equal to at least 10 percent of the voters from the previous General Election in 2014 and the signatures must come equally from each of the four Congressional Districts. For this election cycle, the total number of signatures was 55,234 and 13,809 were needed in each of the four districts. The PAC needed to submit these signatures to the counties for verification no later than June 21, 2016. However, as of June 21, 2016, the Secretary of State declared the Voter ID constitutional initiative petition insufficient due to failure to submit by the deadline.

How much could Nevada spend on Voter ID laws?

The Fiscal Analysis Division of the Nevada Legislative Counsel Bureau (LCB) reported on August 4, 2016, two days after the initiative petition was filed, that the financial impact of the initiative could not be determined. The LCB said that the legislation may result in addition expenditures by the state and local governments, but the amount of those expenditures cannot be determined until the legislation is enacted. This was the same conclusion the LCB reached about the failed constitutional initiative for this election cycle and the 2014 initiative.

With each of the three bills proposed in 2015, the Nevada Department of Motor Vehicles attached a fiscal note that estimated a voter identification law would cost $294,299 during Fiscal Year 2015-2016. Of this amount, $223,000 would be one-time expenses incurred to work with a contracted vendor to create and program a voter identification card system. The remaining $71,299 would be spent producing the cards for voters free of charge.

The ruling in the 2014 ACLU lawsuit against Sharron Angle and the Our Vote Nevada over the 2014 constitutional amendment initiative petition noted that the costs of implementing voter ID requirements could be anywhere between $3 and $10 million. They estimated that this money would be needed for providing IDs at no cost to voters, notification, voter education and outreach, training and staffing, new equipment and additional provisional ballots. 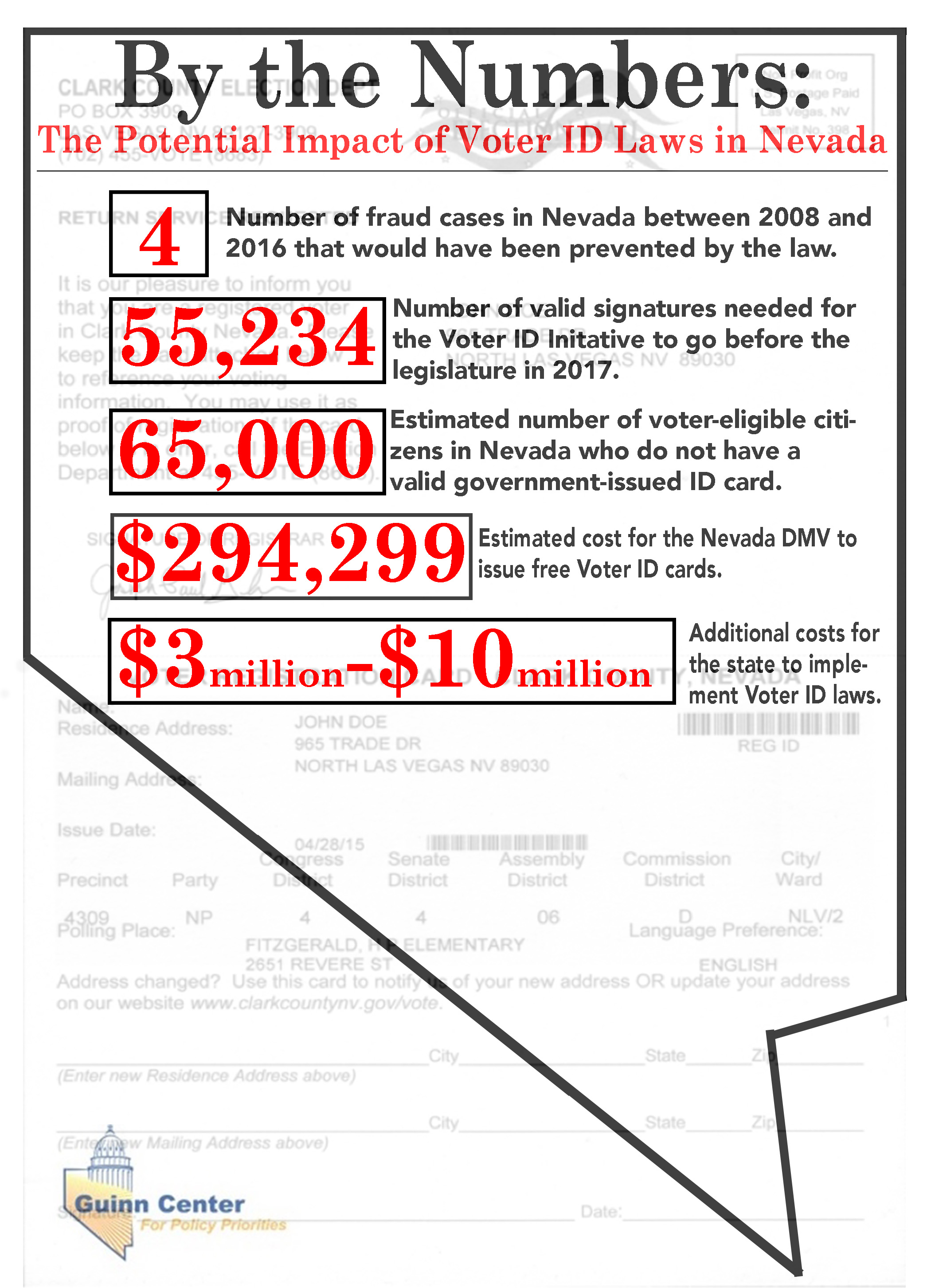