In recent years, Nevada, under Governor Brian Sandoval, invested heavily in our state’s elementary and secondary schools. Unfortunately, despite the historic investment of resources, supported by our taxpayers, Nevada’s K-12 education system continues to rank at the bottom in many national rankings, such as chance for success in one’s future career.

Local and state education agency officials, educational leaders, and school principals argue frequently that student transiency, especially in Clark County School District (CCSD), is one of the primary reasons why we have not been able to improve educational outcomes. The average transiency rate across CCSD and its 350+ schools is 24 percent (and has been as high as 40 percent in recent years). For almost 30 schools, the transiency rate in 2017-2018 ranged between 40-60 percent and many of these schools were 1- and 2- star schools on the Nevada School Performance Framework (NSPF), the State’s accountability framework).

There appears to be some support for their claims that transiency affects student outcomes. Existing research “strongly suggests that frequent student movement has significantly negative consequences” on transient students “because of academic and social disruption,” and “may also have negative effects on non-mobile students in schools with high levels of student movement.” Some of the impacts of transiency on academic achievement are:

State and local education agency officials in Nevada have not studied the root causes of transiency. However, in general, for many households, especially low-income households, residential mobility is unplanned and may be the result of family stress (e.g., divorce, death), changes in employment (status), and an “inability to pay rent and bills, and poor quality or unsafe housing.”

Similarly, eviction policies and policies governing landlord-tenant relationships could also have an impact on residential mobility. Currently, roughly 45 percent of Nevadans are renters. An eviction occurs when a landlord initiates the involuntary removal of a tenant. Evictions typically take place because a tenant fails to pay rent, damages the property, causes disturbances, or breaks the law.

However, in many states, landlords can legally initiate “no fault” evictions, where tenants are evicted even if they have made every payment and have not violated the lease agreement. In Nevada, landlords can legally evict tenants without cause, although stipulations apply. If the tenant is in a month-to-month agreement, the landlord must provide at least 30-days notice for eviction. If the tenant is in a fixed-term lease, then the landlord can only evict the tenant when the lease agreement expires.

Our preliminary analysis suggests that there is a positive association between transiency rates, eviction rates, and NSPF ratings in Clark County. Specifically, we observe that some schools with higher than average transiency rates are located in (or are adjacent to) neighborhoods where the average eviction rate significantly exceeds the state and county averages. In turn, many of these schools have 1- and 2- star rankings on the NSPF.

Our findings are similar to those of other research studies that examined the relationship between evictions and student transiency rates. For example, a 2017 report released by the Kansas City Eviction Project found that some of the schools in Kansas City, Missouri, with the highest transiency rates also have the highest eviction rates per square mile. The report also found that evictions have been concentrated in high-poverty and predominantly black communities in Kansas City. Higher eviction rates in Clark County appear concentrated in North Las Vegas, West Las Vegas, and East Las Vegas (see Figure 3 – bigger red spheres reflect higher eviction rates). 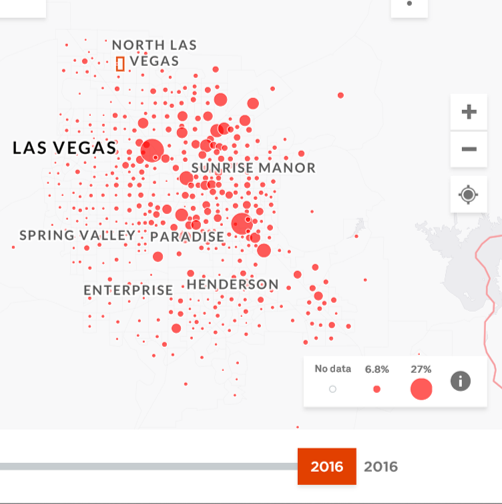 In interviews, principals, school leaders and teachers in CCSD shared that housing issues, specifically those that relate to families as renters or tenants, are some of the primary drivers behind transiency rates. In some neighborhoods with higher eviction rates, transiency rates at those schools are higher than the county and state average. Additionally, principals mentioned issues that school families have with landlords who do not take care of repairs, specifically. School leaders also mentioned that the school’s immigrant families were among the most vulnerable given language barriers and lack of knowledge about their rights. Principals noted that many of the students, following an eviction, are unable to retrieve their backpacks or textbooks, which creates an additional burden on some of our community’s most under-resourced families.

As several principals shared, these housing/tenant situations end up contributing to transiency in that their school families are continuously seeking better housing situations. One principal of a 1-star school with a 40 percent transiency rate shared that some of the school’s families move 2-3 times a year in search of better housing; every time a family moves, the students can lose as much as three weeks of school. It was the belief of several school leaders that the housing conditions (and housing instability) faced by many of their families is a driver of higher transiency rates, which ultimately affects student outcomes.

Policies that address tenant-landlord relations could translate into greater stability for families, many of whom have school-age children. This, in turn, could help stabilize our schools and classrooms, thereby giving students the best opportunity to learn. In 2018, Kansas City, Missouri officials established a Healthy Homes and Rental Inspection ordinance, which provides regulations for minimum health and safety standards in rental housing in Kansas City, Missouri. Last month, Clark County Commissioner Tick Segerblom announced that local landlords would have to make repairs on their properties or face financial penalties. The Nevada Legislature is currently considering several bills that address housing instability. For example, Senate Bill 151 addresses the eviction process, and Senate Bill 256 addresses provisions governing landlord tenant relations. These recent developments could help improve housing stability for many of our families, which could, in turn, reduce student transiency, and improve academic outcomes. These sorts of policies are a relatively low-cost way of helping our schools. They reflect a systems-level approach for addressing the needs of our students and their families so that they are more likely to be successful in the classroom. Only then are our taxpayers likely to see a real return on the historic investments that we have made in recent years.