Earlier this month, Nevada Governor Brian Sandoval signed Executive Order 2018-5, which established the Statewide School Safety Task Force. The Task Force, comprised of superintendents, parents, students, behavioral health specialists, and others, will recommend a series of school safety initiatives for inclusion in Governor Sandoval’s final state budget that will be drafted this summer.

Many of the recommendations could address behavioral health services and supports, such as those offered at Valley High School’s Wellness Center. But members of the Task Force might also consider physical or structural changes or the deployment of security technologies to school buildings (e.g., metal detectors) to improve school safety. Following a series of school shootings, schools around the country are looking to enhance security measures. The Washoe County School District is already implementing measures to create “a single locked entry checkpoint” at 24 elementary schools (by summer 2019).

The U.S. Department of Justice has assessed the comparative advantages of different security technology options schools could deploy (see Table 1). 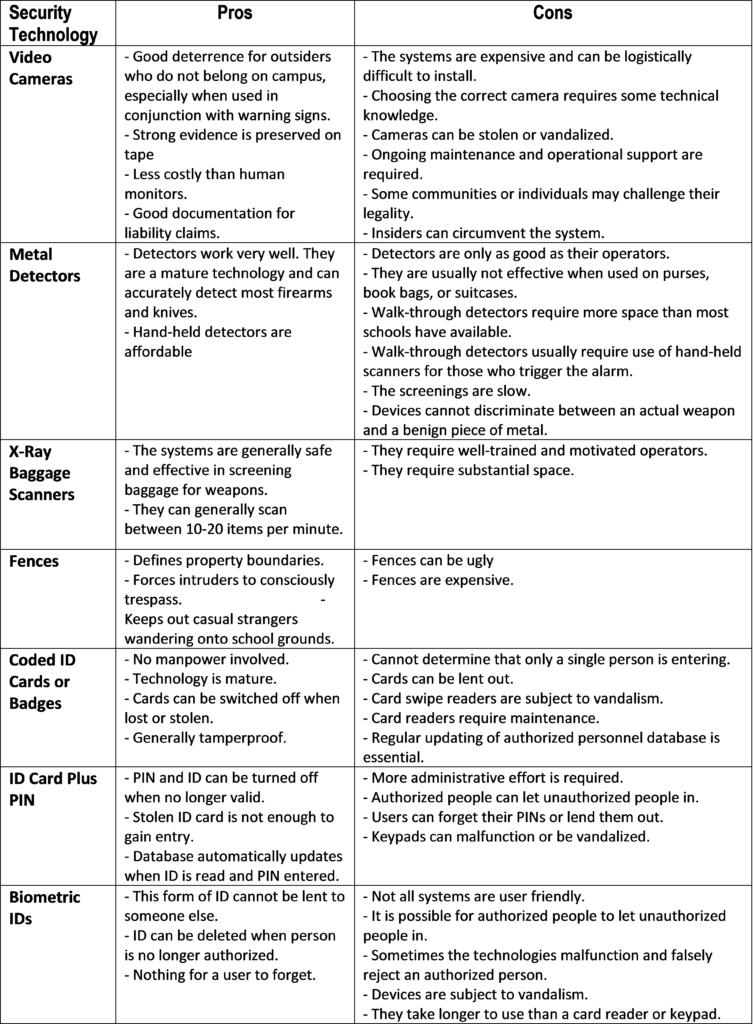 Nevada has approximately 259 high and middle high schools (large schools) and 413 elementary schools (including charters but excluding alternative schools). Schools within the Clark County School District currently have surveillance cameras. Given the number of public schools in Nevada, the estimated cost of deploying the various security technologies in all eligible public schools across the 17 school districts (excluding charters) are as follows (see Table 3):

Clark County School District: The Clark County School District (CCSD) currently has 331 school sites plus administrative buildings. As of 2016, CCSD reported that 50 percent of school buildings are over 20 years old and that in five years, 62 percent of buildings will be over 20 years old. CCSD has declared 38 elementary schools to be at capacity and notes that 22 schools operate on year-round schedules. As of 2016, there were also 2,095 portable classrooms throughout the district. The district also reports that 16 schools meet current requirements for replacement based on the ratio of renovation costs to replacement value. As of 2016, CCSD projected that it needed $8.3 billion in capital improvements; this amount did not include deferred maintenance.

Washoe County School District: Twenty-five percent of schools in the Washoe County School District (WCSD) are over 50 years old. Within five years, WCSD projects that virtually every elementary school will be at capacity—with several boundary area schools at overcapacity—half of middle schools will be over capacity, and two high schools will be at overcapacity, while others will face enrollment strain. WCSD has developed a Strategic Blueprint that identifies a need of $123.6 million per year for capital facilities from 2016 through 2024. Specifically, over the next 10 years, the district has $225 million in unfunded school renovation and repair needs. WCSD estimates it will also need at least 16 new schools over the next decade (nine elementary, four middle, and three high schools), based on current needs and projected growth, at a cost of $887 million. This brings the total 10-year capital need to $1.1 billion. In November 2016, a majority of voters in Washoe County supported a ballot measure to raise the county sales tax (from 7.725 percent to 8.265 percent), which will provide the school district $781 million in bonding authority over the next decade to fund capital projects.

Rural Districts: Fifteen percent of rural schools are over 50 years old, which represents approximately $450 million in replacement costs. In addition, approximately 50 percent of rural facilities are in need of improvement. There is great variation in the ability of rural school districts to fund these capital projects. Most districts have critically unmet needs. For example, White Pine School District has two school buildings that are each over 100 years old. The cost of replacing these buildings is $40 million.

In 2016, the Nevada Spending and Government Efficiency (SAGE) Commission in Public Education addressed the facilities needs of school districts around the State.  The Guinn Center proposed several recommendations for consideration.

Among these was the recommendation that the state should identify new sources of revenues to support the construction and/or maintenance of school facilities. Currently, Nevada remains one of a dozen or more states that does not have a state-sponsored school facility funding source. West Virginia is but one example of a state that has successfully established a state-sponsored fund to support the construction and maintenance of school facilities. In 1989, the West Virginia Legislature established the School Building Authority (SBA), which seeks to “facilitate and provide state funds for the construction and maintenance of school facilities” and “to meet the educational needs of the people of the state in an efficient and economical manner.” Over the past two decades, West Virginia’s SBA has provided over $3.2 billion in funding for construction projects across all 55 counties in that state. The SBA is funded with a portion of the general state revenue and lottery funds. Construction funds are derived from general revenue and the sale of capital improvement bonds.

In 2000, the Nevada Planning Commission for New Construction and Repair of Schools discussed the issue of school facility funding and recommended (and proposed during the 2001 71st Legislative Session) that Nevada should: (1) establish a revolving loan fund to help school districts with maintenance/repair needs; and (2) allocate money in the State’s General Fund for state school aid to address school construction and/or significant maintenance and repair costs.

As conversations around the nation and across the Silver State about school safety continue, policy makers want to consider ways to establish a State-sponsored school facility funding source. sIn theory, these funds could be used to renovate older buildings, but also refurbish buildings to incorporate stronger school security features, including the purchase and deployment of security technologies.