As of March 12, households in the United States are beginning to receive invitations to participate in the 2020 Census. As the number of cases of COVID-19 in the United States continues to increase, there is some uncertainty about the potential for the virus to negatively impact the 2020 census. Reflecting this uncertainty, a number of U.S. Senators directed a letter to Steven Dillingham, director of the U.S. Census Bureau, asking for details about the bureau’s plans to “protect census takers, the public, and ensure the integrity of census results.” In this snapshot, we consider the limited information available so far on any impact the COVID-19 virus is expected to have on the 2020 census. In particular, we urge Nevadans to self-respond to the 2020 census online, by phone, or by mail in order to reduce the need for in-person enumeration.

On March 11, 2020, the U.S. Census Bureau released a statement on the anticipated impact of the COVID-19 virus on the 2020 census. The key point emphasized throughout the statement was that “it has never been easier to respond on your own, whether online, over the phone or by mail—all without having to meet a census taker.” The statement further noted that households can respond to the census in English or in twelve additional languages and that “over 99% of U.S. households can respond over the phone in their preferred language.”

In-person follow up may be required for households that fail to respond to the census. The Census Bureau will begin to send census enumerators to nonresponding households as early as April 9, with nationwide nonresponse follow up starting on May 19. According to the bureau’s statement, “the Census Bureau will closely follow guidance from public health authorities when conducting this operation, as we do when conducting all field operations. If we need to delay or discontinue nonresponse follow-up visits in a particular community, we will adapt our operation to ensure we get a complete and accurate count.” Such adaptation may involve scheduling changes or attempts to reach nonresponding households by means other than in-person outreach. For example, the Census Bureau has conducted fieldwork by phone for some surveys other than the decennial census in areas affected by the outbreak.

Lastly, the report noted that the bureau has a “significant contingency budget” in case it becomes necessary to fund additional operations, staffing, or mailouts to address any response shortfalls connected with COVID-19.

In summary, the Census Bureau’s response emphasized the numerous ways to respond to the census. The various modes of self-response to the census (online, paper questionnaires, and by phone) do not require direct contact with census workers. Therefore, high rates of self-response can help to ensure a complete and accurate census count even in the midst of this pandemic.

How Nevadans Can Respond to the 2020 Census

The CUNY Center for Urban Research has developed detailed interactive maps depicting, among other things, the different outreach strategies that will be employed throughout Nevada and the rest of the country (figure 1). The majority of households in Nevada will be contacted through an “Internet First mailing” approach: these households will receive a mailing with details about how to complete the census online or by phone. Depending on where these households are located, the mailing will either come in English or in English and Spanish. Some households will additionally receive a paper version of the questionnaire. A small proportion of households (about 3.6 percent of Nevada’s households) will receive hand-delivered instructions and census questionnaires. All of the mailed invitations to participate in the census will include instructions for seeking further assistance in English and in 12 other languages.

Figure 1: How Nevadans Will Be Invited to Complete the 2020 Census (source) 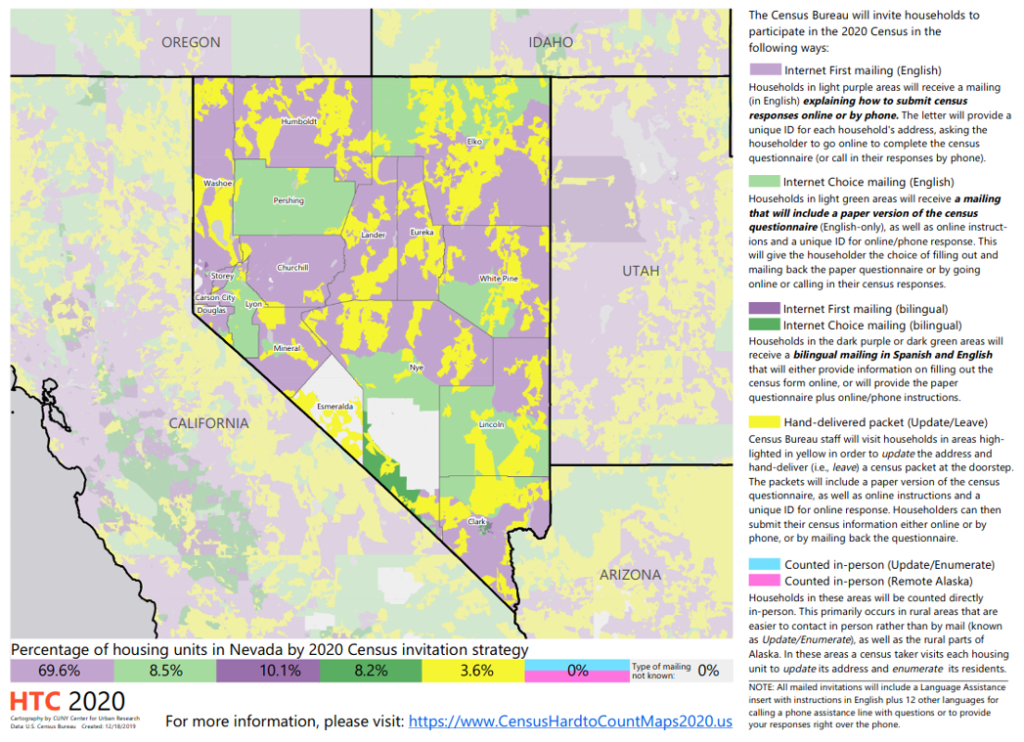 Regardless of the method by which initial instructions for completing the census are sent, Nevadans can respond online, by phone, or by mailing paper census questionnaires. By responding to the census using these methods, Nevadans can help to minimize the risk that COVID-19 will interfere with the 2020 census count.

Self-responding to the census is extremely important: while COVID-19 has little impact on response by mail, phone, or Internet, it does have the potential to significantly interfere with the in-person follow-up efforts that become necessary when households do not self-respond.