Motivation for Completing the Census

The 2020 Census is here! The road to the 2020 census has been long and marked by controversy, particularly concerning the potential inclusion of a citizenship question on the 2020 census questionnaire (there is no citizenship question on the census questionnaire). Over the course of the past week, households have been receiving invitations to participate in the 2020 census as the country is focused on slowing the spread of the COVID-19 virus. With so much uncertainty in the world and confusion about the census itself, it is all too easy to put the census forms aside and forget about them. In this snapshot, we remind readers of why the 2020 census is so important and provide some information on how to complete the census, even for those practicing social distancing.

Why Is It So Important to Respond to the 2020 Census?

The 2020 census will have a significant impact on the lives of many Americans because it affects the distribution of federal funding for numerous social programs. It also determines the apportionment of seats in the U.S. House of Representatives and informs the drawing of congressional districts, school districts, and other important boundaries.

The results of the decennial census and other data products produced by the Census Bureau, such as the American Community Survey (ACS), are used to apportion approximately $675 billion per year in federal funds to local communities.

Nevada could receive more than $20,000 in federal funding for each Nevadan counted in the 2020 census. Conversely, Nevada stands to lose more than $20,000 for each Nevadan missed by the 2020 census. Some programs with federal funding allocated, at least in part, based on census results include Medicaid, Federal Direct Student Loans, Supplemental Nutrition Assistance Programs (SNAP), and Medicare Supplemental Medical Insurance (Part B).

Businesses, nonprofits, researchers, and government agencies use census data all the time to make decisions about where to invest resources and to identify community needs. The Guinn Center uses census data almost every day!

What is the Best Way to Respond to the 2020 Census?

With the spread of COVID-19, reducing the need for in-person enumeration is important. Luckily, the 2020 census provides more ways than ever to respond. The 2020 census can be filled out online, by phone, or by mail. The Census Bureau will send up to five mailings reminding households to complete the census. before sending enumerators to nonresponsive households to attempt to obtain a census response. Failing this, the enumerators will attempt to obtain a proxy response from neighbors.

Responding online, by phone, or by mail is preferable to responding by in-person enumeration. In the context of a pandemic, it is safer as it avoids person-to-person contact that could result in spreading the virus. It also requires fewer resources and a smaller enumeration workforce, which is important as the Census Bureau has struggled to hire enough temporary workers for the 2020 census.

Starting on March 20, 2020, the U.S. Census Bureau will be providing information about self-response rates (response by phone, mail, or online) to the 2020 census here.  As of March 22, 2020, Nevada’s response rate is 21.3 percent, which is slightly above the current national average  (21.0 percent). 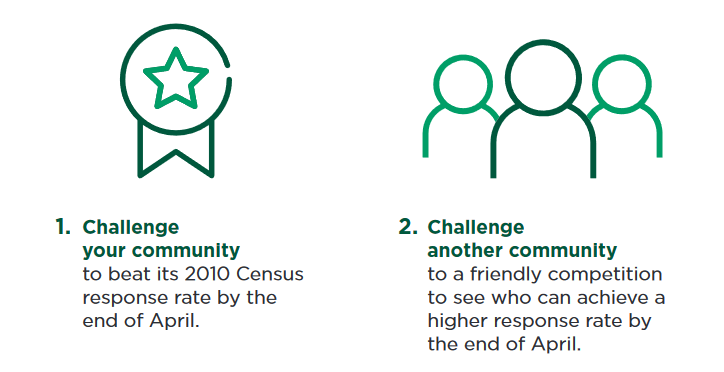 Exploring these data will allow those involved in census outreach to identify areas that are responding at high rates and areas that may require some additional outreach and assistance. Communities can use these data in the coming weeks to track their response rates and to participate in the Census Bureau’s “response rate challenge.” The Census Bureau challenges communities to self-respond at rates greater than the 2010 census response rates. A preliminary look at these data will be the focus of the next census snapshot.

Responding to the 2020 census is easy, safe, confidential, and above all, important. It only takes a few minutes to complete, but each response helps to ensure that Nevada’s communities receive the funding they need to support their diverse and growing communities in the decade to come. This will likely be even more important than usual in the years to come as the COVID-19 pandemic may have lasting economic repercussions that could be taxing on many programs that provide indispensable services to thousands of Nevadans. Every response counts: taking a few minutes to complete the 2020 census helps to ensure that Nevada’s communities have the support they need for the decade ahead.