The summer news cycle has been dominated largely by debate surrounding the 2020 Census. The issue began last year when United States (U.S.) Department of Commerce Secretary Wilbur Ross announced that the 2020 Census would include a citizenship question. Throughout the public debate, the Trump Administration has maintained that “it wants to collect citizenship data from all households through the 2020 census to help better enforce Voting Rights Act protections against discrimination of racial and language minorities.”

Following the announcement, political and community leaders around the country criticized the move, arguing that the inclusion of the question might likely inhibit participation among immigrants and undermine the accuracy of the 2020 Census. An inaccurate 2020 Census could have both political and economic consequences for many states and communities. This is largely because of the ways in which the decennial census program data is used.

Subsequently, several civil rights organizations, along with a group of state and local governments challenged the inclusion of the question in federal court. Three federal judges (in California, Maryland, and New York) later ruled that the citizenship question “violated administrative law” and was unconstitutional on the grounds that prevented “the government from carrying out its mandate to count every person living in the U.S. every 10 years.” After the federal government filed a motion to bypass the federal appeals process, the case went directly to the Supreme Court. In a 5-4 split decision issued on June 27, 2019, the Supreme Court ruled against the U.S. Department of Commerce, effectively blocking the addition of the citizenship question to the 2020 Census. Chief Justice John Roberts, writing for the majority, cited “contrived reasons” for the inclusion of the question. The Supreme Court, however, sent the case to a lower court, offering the Department of Commerce an opportunity to respond if it could do so in a timely fashion.

Below, we explore how the inclusion of the question might have a bearing on Nevada’s survey completion rate given the state’s composition of demographic groups and discuss the implications of undercounting the Silver State’s population.

Figure 1 provides a breakdown of demographic groups in Nevada compared to that of the United States as a whole. In general, the data suggests that Nevada is more diverse than the nation on average. Nevada has higher concentrations of Asians (8.1 percent), Latinos (28.2 percent) and the foreign born (19.5 percent) than does the United States, on average (17.6 percent and 13.4 percent, respectively). These groups tend to have a greater sensitivity to questions regarding citizenship, and, as such, the data suggests that Nevada may be vulnerable to under-participation in the 2020 Census.

Figure 1: Demographic Profile of Nevada vs. the United States, 2017 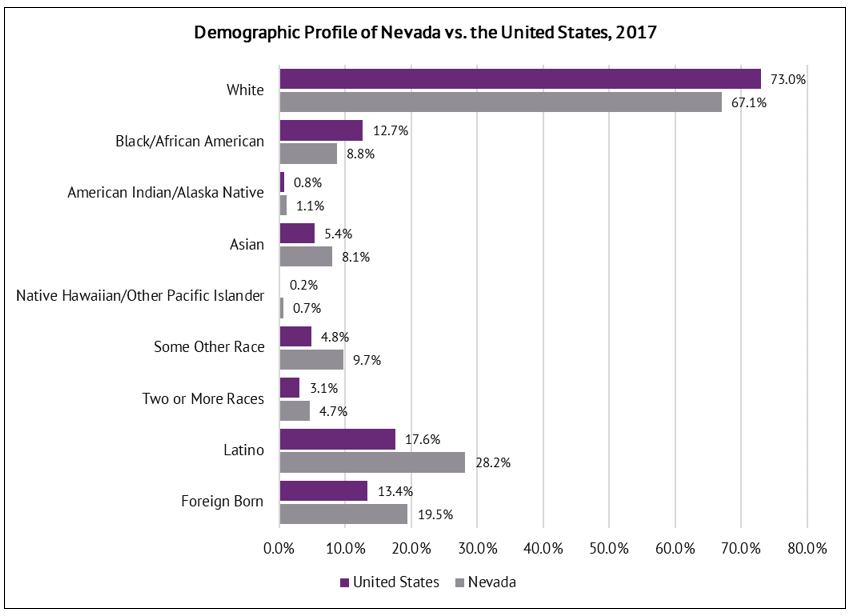 Figure 2 displays the country of origin of Nevada’s foreign-born population. Almost half (49.0) originate from Central America, of which Mexico accounts for 40.3 percent, followed by 30.8 percent from Asia, 7.4 percent from Europe, 4.2 percent from the Caribbean, and slightly more than three percent from Africa and South America. 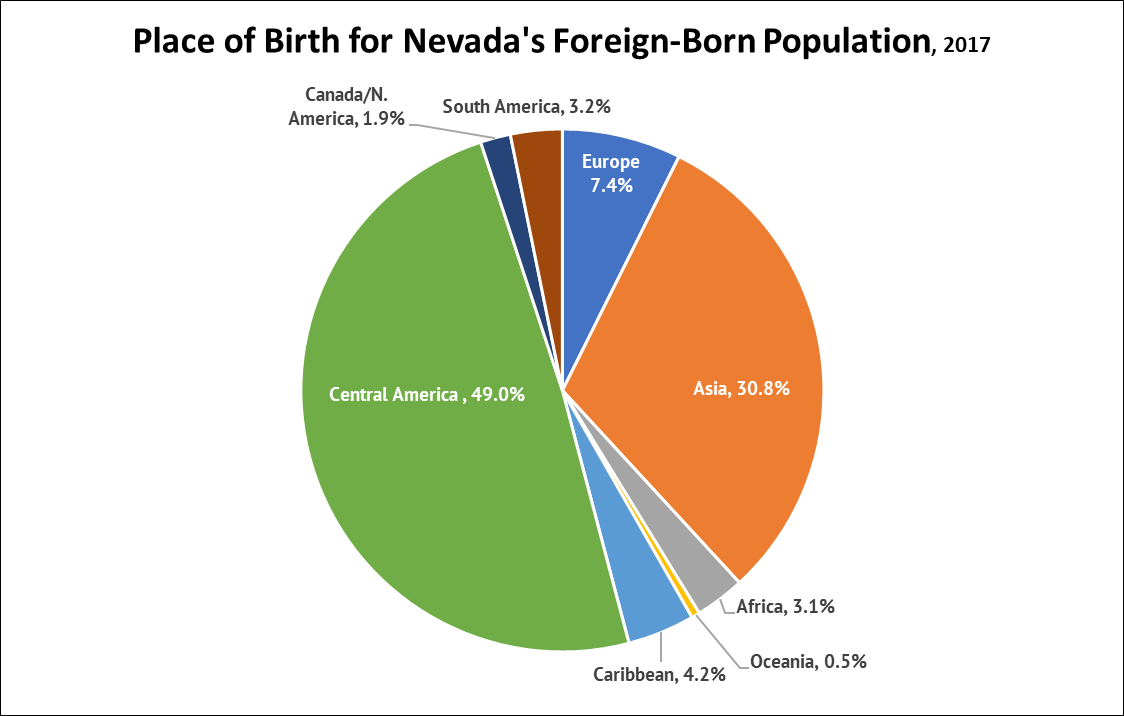 The Pew Research Center (Hispanic Trends) provides data on the foreign-born population, specifically unauthorized immigrants (UI), for each state and the country as a whole. As shown in Figure 3, in 2016, unauthorized immigrants constituted 7.1 percent of Nevada’s total population, which is higher than the national average of 3.3 percent. More than 30 percent of Nevadans are either foreign-born or have parents who are foreign-born. According to the American Immigration Council, from 2010 to 2014, a quarter of a million individuals in Nevada lived with at least one undocumented person. 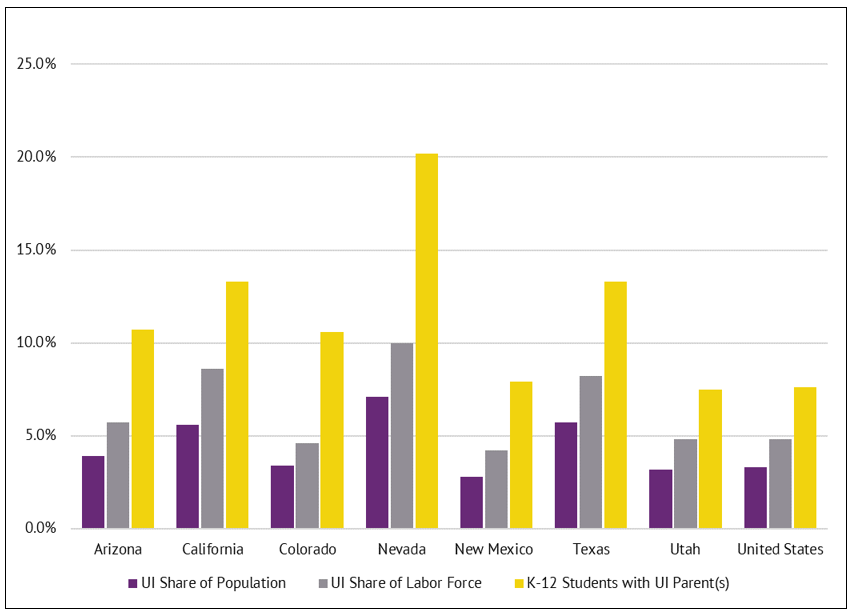 Minority Communities and the U.S. Census

The U.S. 2020 Census is subject to strict confidentiality guidelines under federal law, which prohibits the federal government from sharing personally identifiable information about respondents for 72 years following its collection. However, a study conducted by the U.S. Census Bureau suggests there is a high degree of mistrust among minority communities and the foreign-born population regarding the Census’s confidentiality. In particular, select groups fear that the U.S. Census Bureau will share data with other federal agencies. For example, some Latinos worry that any information provided might be shared with the U.S. Department of Homeland Security (DHS) for the purposes of immigration enforcement.

The U.S. Census Bureau study evaluated attitudes toward the 2020 Census and how those might pose barriers to an accurate count. The data is displayed in Table 1. Among the select groups in Table 1 that are particularly concerned about data sharing, Nevada’s shares of some of these groups are relatively high, as discussed previously with respect to Figure 1 (e.g., Asians, Latinos). Almost one-third (32.0 percent) of those born outside the U.S. have a high level of concern regarding data sharing. As Figure 1 indicated, nearly one-fifth of Nevada’s population is foreign born. If the percentage holds for Nevada, then nearly 180,000 people might decline to respond to the 2020 Census. Similarly, over one-third of African Americans worry about data sharing, and just under one-third of individuals without a high school diploma fear that their answers will be used against them. Almost nine percent (253,000 individuals) of Nevada’s population is African American (see Figure 1), and about 13.2 percent of the total population has less than a high school diploma. Moreover, African Americans have the lowest graduation rate in Nevada at 67.7 percent. The extent to which these could intersect with one another is not yet certain, but it is possible that African Americans are vulnerable to an undercount.

Nevada’s demographic profile suggests that it is particularly susceptible to non-response in the 2020 Census. It has comparatively high foreign-born, Latino, unauthorized immigrant, and Asian populations. And it is these groups that are highly sensitive to issues surrounding data sharing and thus may not be willing to interact with federal officials. To underscore our concern, an analysis of the 1990 Census found that there was a significant undercount of minority populations in Nevada, estimated at 2.6 percent. In short, Nevada may face significant challenges in ensuring an accurate Census count.

Table 1: Select Groups with the Highest Levels of Concern about Data Sharing

What Is at Stake

Census program data is used primarily for the “provision of population data for the allocation of seats in the U.S. House of Representative and the definition of boundaries for congressional districts, state legislative districts, school districts, and voting precincts.” (Nevadans may recall that following the 2010 Census, Nevada gained one Congressional seat accounting for its current tally of four representatives.) Undercounts can result in fewer U.S. House seats in a given state in the apportionment process, as the population distribution determines the allocation of the 435 congressional districts in the country. Officials also use census data, in combination with characteristic estimates provided by the American Community Survey, to enforce voting rights and civil rights legislation, and to determine the sampling frames for dozens of surveys conducted by Federal agencies and departments.

The Census count also factors into the calculation of federal funding for certain programs. In Fiscal Year (FY) 2015, 132 programs used decennial census program data to distribute more than $675 billion in federal funds across the 50 states (and territories). In FY 2016, Nevada received over $6.2 billion in federal aid through matching funds, grants, tax credits, and loans distributed across 55 large federal programs. Medicaid and Medicare together accounted for $3.2 billion or 52.5 percent of federal assistance. Nevada also received $681 million from the U.S. Department of Agriculture for nutrition assistance programs. The Silver State received another $120 million in Title 1 grants for local education agencies, and $357 million for highway planning and construction. In 2018, Andrew Reamer at George Washington University (GWU) simulated the fiscal impact of an undercount and foregone federal revenue for each state; a one percent drop in population count would have cost Nevada $628 in 2015 for each person missed by the census. Roughly 33.9 percent (nearly $10 billion) of the Governor’s Recommended Budget of $29.4 billion for the 2019-2021 biennium is from federal sources of revenue.

Nevada has a significant portion of its population who are unauthorized immigrants, foreign-born, or members of communities that are apprehensive about the 2020 Census. Given its demographic makeup, Nevada may confront a considerable challenge in ensuring the accuracy of its count.

In recognition of the salience of a robust response rate, the Nevada Legislature appropriated $5 million in the 80th (2019) Session to support Census-related community outreach and educational activities (Senate Bill 504). Ensuring an accurate 2020 Census count likely will require significant community and local government engagement to address concerns of some of our communities and thus encourage their participation. A significant undercount could affect congressional apportionment and reduce the amount of federal money that Nevada might receive over the next decade.