While homelessness has declined in southern Nevada, the state still has the eighth-highest per capita rate of homelessness, measured as homeless per 100,000 people. Nevada also ranks first in the country in unsheltered unaccompanied homeless youth. Overall, its unsheltered homeless population ranks fifth in the nation, at 139.7 per 100,000. In Nevada, homeless individuals tend to be concentrated in Clark County, and, more specifically, Las Vegas, though Reno has a considerable homeless population, as well.

Americans tend to be ambivalent about homelessness: on the one hand, they support government aid to aid homeless individuals; on other, they favor laws that would criminalize homelessness. As a recent example of the latter, in July 2019, the Reno City Council was going to consider a resolution that would have criminalized sleeping in public places. Advocates called the resolution “anti-homeless” and Mayor Hillary Schieve eventually pulled the item from consideration. The disconnect can challenge policymakers in developing actionable but compassionate solutions to the problem.

Here, we examine factors driving unsheltered homelessness in southern Nevada and summarize a recent report from the United States Interagency Council on Homelessness and the Council of State Governments Justice Center that may provide a set of strategies for municipal and state leaders to consider in addressing the homeless population.

One of the data points that stakeholders examine annually is the Point-In-Time (PIT) Homeless Count conducted around the Silver State. In southern Nevada, the homeless count is conducted by the Southern Nevada Homeless Continuum of Care (SNH CoC), a collaborative community partnership comprising of over 30 organizations united to prevent and end youth homelessness in Southern Nevada. The Point-in-Time Homeless Count, required by the U.S. Department of Housing and Urban Development (HUD), provides data that is used to measure the prevalence of homelessness. As shown in Figure 1, the 2019 Homeless Census revealed a 9 percent decrease in the number of individuals counted during the PIT census between 2018 and 2019.) 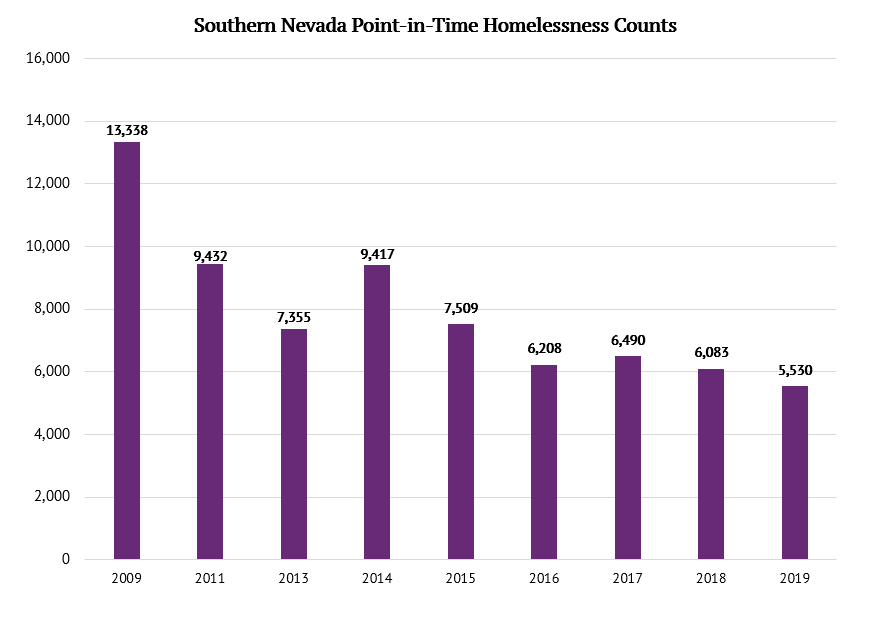 Figure 2 reveals that that while overall homelessness numbers have decreased in Nevada, unsheltered homeless as a share of total homeless has increased – from 30 percent in 2009 to 56 percent in 2018.

The increase in the number of unsheltered homeless may stem, in part, from both the inadequate supply of affordable housing and the lack of emergency shelters and transitional housing in southern Nevada.

As we have reported previously, one factor that is contributing to the rise of unsheltered homeless is that there is a scarcity of decent, safe, and affordable housing. Affordable, in this context, refers to housing that costs less than 30 percent of the resident household’s income, per federal guidelines. A 2019 report from the National Low-Income Housing Coalition (NLIHC) reveals that no state has an adequate supply of affordable and available homes for extremely low-income (ELI) renters, which are defined as renter households at or below the federal poverty guideline or 30 percent of the Area Median Income (AMI), whichever is higher. And Nevada ranks last in the United States when it comes to providing affordable housing for households who earn at the ELI level.

As Figure 3 illustrates, in Nevada, only 19 affordable and available rental homes exist for every 100 ELI renter households. This is roughly half of the national average, and lower than all other Intermountain West states.

Figure 3. Affordable and Available Units per 100 Households at or Below the ELI threshold, 2017

Another factor contributing to the unsheltered homeless population is that emergency resources are often overburdened. Emergency shelters, crisis stabilization units, and other crisis response options have a limited amount of space and resources, so some homeless individuals are turned away. For example, in an interview with the Las Vegas Review-Journal, Catholic Charities of Southern Nevada CEO Tom Roberts stated that client enrollments “have risen significantly year over year,” which are taxing the nonprofit. Even when shelters have adequate resources, they might have entry requirements that deter people from coming into a shelter. Individuals with criminal records can be excluded, and often there are strict sobriety restrictions with mandatory participation in treatment. These barriers prevent certain segments of the homeless population from accessing resources.

Moreover, state and local governments have been investing less in emergency shelter and transitional housing, which offers housing subsidies, plus supportive services, for up to two years in residential settings. These range from scattered site apartments or project-based apartments to congregate living facilities for the homeless. Research suggests that temporary and transitional housing is both expensive and ineffective. As one 2015 Urban Institute study noted: “Emergency shelter, often the entry point into the homeless system, is a critical service for families who lose their housing. However, shelters, defined as temporary spaces, are not healthy for family stability and child well-being. [And] transitional housing has become an inefficient and costly waiting room—holding families in temporary housing while they complete a series of service requirements that do not increase success rates.”

Given the growth of homeless individuals in urban areas and the lack of temporary housing, law enforcement agencies are often the first touch point of connecting homeless individuals to much needed services and are “stepping up” to be part of the solution. A 2018 Police Executive Research Forum report found that police officers “have learned that making arrests is not an effective response. Rather, today’s police and sheriffs’ departments see their role as taking leadership and finding innovative solutions, which often involve multi-faceted activities with social service agencies, other government departments, and other partners. Today, many law enforcement agencies are implementing direct outreach to homeless individuals, building partnerships with a wide range of service providers, and encouraging their officers and deputies to be resourceful and to show compassion for homeless persons.”

The United States Interagency Council on Homelessness (USICH) and the Council of State Governments Justice Center (CSG) recently released a brief titled Strengthening Partnerships Between Law Enforcement and Homelessness Service Systems, which discusses collaborative strategies between law enforcement personnel and homelessness response leaders to address the issue of unsheltered homelessness. These recommendations were the result of a conference that brought together cross-system teams from ten cities across the country, as well as national and federal partners of the USICH and the CSG.

As noted in the report, there are five recommendations for law enforcement and homelessness service providers to address unsheltered homelessness.

As stated in the report, law enforcement and homeless system leaders need to “identify[] shared goals, metrics for tracking and assessing progress over time, and clear roles for each system’s involvement.” This could involve, for example, defining oversight responsibilities, determining what information should be collected and monitored, and identifying the responsible party in the event of an urgent situation. One way to establish this partnership is to create a Memoranda of Understanding (MOUs) between law enforcement and homelessness service providers to ensure transparency and accountability. Depending on the resources available, law enforcement may play a significant role in outreach efforts, whereas in other places where there are stronger outreach efforts, their role might be minimal.

In addition, law enforcement and homeless system leaders should attempt to engage other stakeholders to build financial and public support for program initiatives. Public officials, behavioral health, and juvenile justice systems are prime stakeholders that can assist in providing resources to create a comprehensive, community-wide solution to unsheltered homelessness. Furthermore, stakeholders should attempt to incorporate the perspectives of people who have experienced homelessness in the development of outreach plans. Given their unique experiences, this has the potential to improve service participation and aid agencies in responding to the needs of the target population.

2.  Use data to understand local need and assess progress

Collecting data can help foster a clearer understanding of the scope and needs of the unsheltered homeless population. Homeless service providers and law enforcement should collaborate to share data on key indicators, including the number of unsheltered homeless, the number and size of local encampments, and demographic information to generate specific response plan to target geographical areas or certain sub-populations (such as youth and women experiencing homelessness) that require unique assistance.

3. Review and align local laws and ordinances to support the goals of the partnership

Increasingly, communities around the nation have turned to legal measures to deter visible homelessness.  For example, between January 2012 and November 2015, the city of Dallas, Texas, issued over 11,000 citations for sleeping in public. Local ordinances, called “act of living” laws, often prohibit individuals from sleeping, eating, sitting, and panhandling in public spaces. These laws may be inadvertently forcing homeless individuals to congregate in areas that may be unsanitary and unsafe. Law enforcement and homelessness response leaders should examine the impact that local ordinances have on the homeless population. Cooperation with public officials may be necessary to appeal or amend ordinances if they are found to have a negative impact on the homeless population.

Furthermore, law enforcement and homelessness response leaders should identify whether a homeless court exists in their jurisdiction. These court-based diversion programs are specifically created to address the needs of people experiencing homelessness through the use of interdisciplinary approaches to reduce criminal offending and the provision of alternatives to incarceration. Here we note that Nevada currently has sixty-seven specialty courts, but does not have any court-based diversion programs specifically for homeless individuals.

A 2018 paper conducted by researchers at the University of Nevada, Las Vegas (UNLV), examined how state and local laws and statutes impact homeless youth in Southern Nevada. Their review of policies indicated that “Nevada statutes are not consistent with the model statutes reflecting best policy practices for responding to the needs of homeless youth.” For example, Nevada’s status offenses (e.g. curfew ordinances) may have a negative effect on homeless youth.

Law enforcement and homelessness service providers should develop evidence-based protocols and policies that train officers on how to interact with people experiencing unsheltered homelessness. This could include specialized trainings on substance use disorders, de-escalation techniques, and protocols for connecting homeless individuals to needed resources. Protocols and trainings should be developed in partnership with other stakeholders such as behavioral health and juvenile justice systems. If possible, trainings should incorporate the perspectives of those that have experienced homelessness due to their unique insight.

Las Vegas Metropolitan Police Department’s newly expanded homeless outreach team is part of a collaborative effort between local homelessness service providers and the City of Las Vegas’s MORE team to address homelessness. This partnership is intended to assist Metro in interacting with homeless individuals to avoid arrests and instead link those individuals to needed services. According to the department, the program has already come into contact with 3,000 homeless individuals, of which “791 have accepted services and 147 are now self-sustaining.” As we noted in our 2018 Community Policing in Northern Nevada policy report, “The Reno Police Department and the Washoe County Sheriff’s Office also operate the Homeless Evaluation Liaison Program (HELP), which was founded in 1994 as ‘an effective alternative solution to the use of traditional policing methods of increased enforcement and incarceration” for the chronically homeless.’

The brief’s final recommendation aims to reduce the number of contacts that homeless individuals have with law enforcement and address the underlying causes of unsheltered homeless. To facilitate this, there are four specific areas designed to develop program capacity, as described by Figure 4.

Source:  The United States Interagency Council on Homelessness and the Council of State Governments Justice Center

A review of these best practices suggests that Nevada’s law enforcement agencies have made some progress in addressing the area of providing “effective crisis response that draws on law enforcement, homelessness services, and behavioral health resources,” as evidenced by the creation of the MORE and HELP teams.  However, there is more work to be done across stakeholders to address the additional areas of focus. Ending homelessness will require greater collaboration, financial resources, and strategic planning.