Residents of some counties also voted on local ballot measures, including those in Lyon County, where the ordinance to “end brothels and legalized prostitution” failed (19.5 percent voted “yes” on the advisory question). And in Washoe County just 31.4 percent of voters supported WC-1, a ballot question that would have imposed an additional property tax to fund a Truckee River flood prevention project.

Here, we recap the six statewide ballot initiatives. We summarize what Nevadans can expect next and examine how Nevada compares to other states.

Marsy’s Law is a victims’ bill of rights that will be enshrined in the Nevada Constitution. It originated as Senate Joint Resolution (SJR) 17 in the 78th (2015) Legislative Session and passed by a majority of legislators in that Session and the subsequent one. As a constitutional amendment, it was required to come before the voters at the November 2018 General Election, and it was approved by 61.2 percent of Nevada voters. Marsy’s Law repeals current victims’ rights provisions contained in Article I, Section 8, of the Nevada Constitution and replaces those provisions with new rights that would be enumerated in Article I, Section 23.

With the enshrinement of Marsy’s Law in the Nevada Constitution, Nevada joins California, Illinois, North Dakota, Ohio, and South Dakota that have versions of this victims’ bill of rights in their state constitutions. In addition, six other states—Florida, Georgia, Kentucky, Nevada, North Carolina, and Oklahoma—ratified versions of Marsy’s Law for inclusion in their state constitutions via ballot initiative at the November midterm elections.

Question 2: The Amendment to the Sales and Use Tax Act of 1955

With approval by roughly 56.5 percent of Nevada voters, the Amendment to the Sales and Use Tax Act of 1955 will exempt certain feminine hygiene products, defined specifically as sanitary napkins or tampons, from sales and use taxes in Nevada, the Local School Support Tax (LSST), and other analogous taxes, such as those that provide revenue to local governments, for a 10-year period. The measure will become effective on January 1, 2019, and expire by limitation on December 31, 2028.

In the 79th (2017) Legislative Session, Senate Bill (SB) 415, which exempted certain feminine hygiene products from the taxes delineated above, passed in the Nevada State Assembly and the Nevada State Senate; it was approved by Governor Sandoval on June 5, 2017. It required submission to the voters at the General Election on November 6, 2018, as any amendments, revisions, modifications, et cetera, to the Sales and Use Tax Act of 1955 must come before the voters in order to be enacted, as the original 1955 legislation passed via referendum. 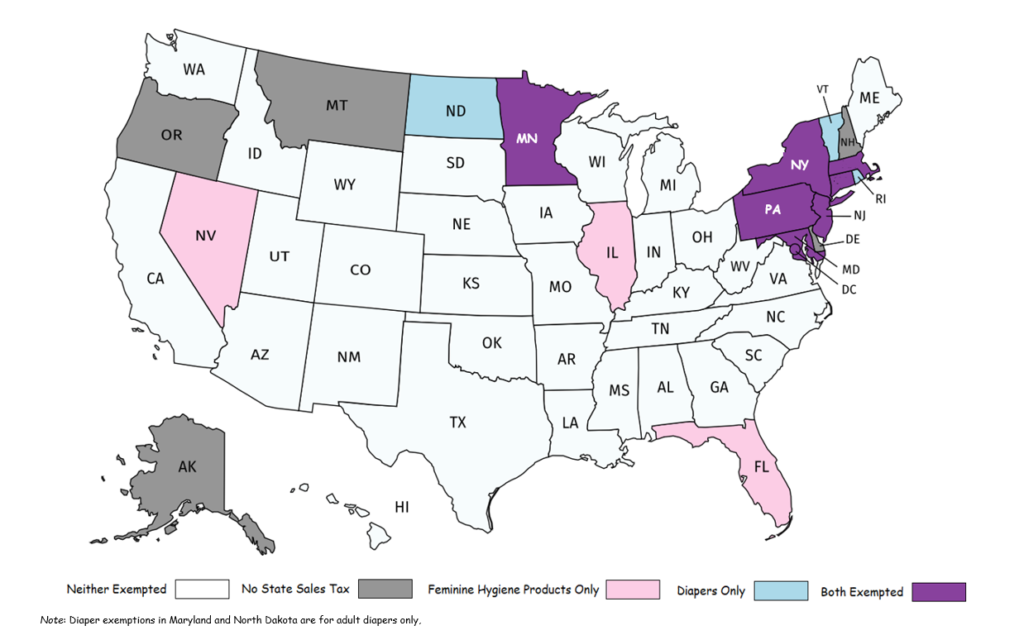 Note: Figure 1 constructed by the Guinn Center using data obtained from the following sources: the National Diaper Bank Network, the Tax Foundation, the Connecticut State Department of Revenue Services, the Council of the District of Columbia, and CBS 4 Miami.

Failure to pass at the November 2018 General Election means that retail electric choice for all ratepayer classes will not be implemented in the Silver State. Nevada residents will continue to obtain their electricity service from the supplier in their designated service territory, whether that is NV Energy, a cooperative, a public utility district, or a municipality. Providers of electricity and electric service across the state would continue to operate within the same oversight and regulations that exist today, with the Public Utilities Commission of Nevada (PUCN) overseeing the rates and operations of NV Energy.

Nongovernmental commercial or industrial end-use customers that consume an annual average of one megawatt of electricity in the service territory of an electric utility still would be able to file an application with the PUCN in order to produce or procure electricity from an alternative supplier to the one in their designated service territory pursuant Chapter 704B of the Nevada Revised Statutes.

Currently, 14 states plus the District of Columbia have full access to retail electric choice, which means that all ratepayer classes may choose a competitive supplier for the generation of electricity. An additional seven states, including Nevada as described above with respect to Chapter 704B have load-permitted access to retail choice; the other states are Arizona, California, Georgia, Montana, Oregon, and Virginia.

Question 4: Medical Patient Tax Relief Act had its genesis in Senate Bill (SB) 334, which was considered in the 78th (2015) Legislative Session. The bill would have included exemptions for hearing aids and hearing aid accessories, and ophthalmic or ocular devices or appliances (including corrective eyeglasses and contact lenses), as well. With an estimated 10-year loss to the State of $21.3 million, the bill passed in the Senate but did not receive a vote in the Assembly and died without further action.

Following the absence of definitive action in the Legislature, the political action committee (PAC), the Alliance to Stop Taxes on the Sick and Dying, filed a petition in September 2015 to amend the Nevada Constitution to exempt certain medical equipment, though hearing and vision devices were excluded. It was placed on the ballot in the 2016 General Election and passed with 71.8 percent of Nevada voters in favor. As an initiative petition to amend the Nevada Constitution, which requires passage in two successive general elections, it was required to come before the voters at the November 2018 General Election.

The Medical Patient Tax Relief Act passed with approximately 67.4 percent of Nevada voters supporting the initiative. The Nevada Constitution will be amended to require the Nevada Legislature to eliminate the sales and use tax on certain medical, oxygen delivery, and mobility-enhancing equipment, such as feeding pumps, oxygen tanks, and wheelchairs, amongst others. It will go into effect on November 27, 2018.

Table 1 and Figure 2 present a comparison of Nevada’s sales and use tax exemptions, relative to its counterparts in the Intermountain West. 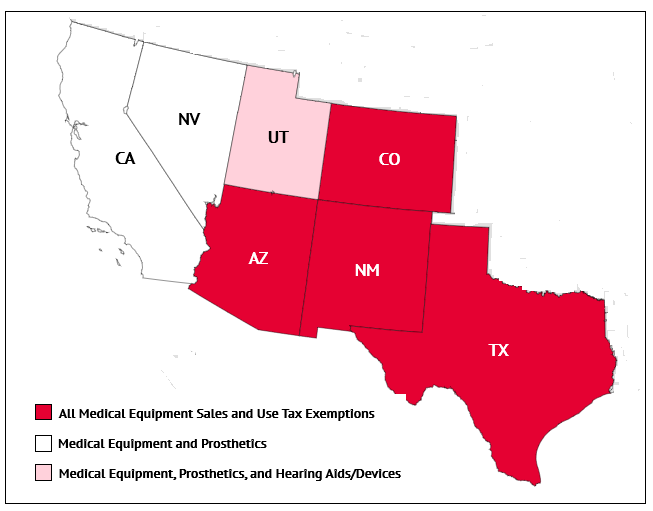 All states have sales and use tax exemptions for prosthetics. Arizona, Colorado, New Mexico, and Texas exempt products in the five selected health care equipment/device categories. Utah exempts medical equipment, prosthetics, and hearing aids/devices. With the enshrinement of the Medical Patient Tax Relief Act in the Nevada Constitution, Nevada joins California in exempting prosthetics and medical equipment only.

Automatic voter registration (AVR) revised State law from an “opt-in” voter registration system to an “opt-out” system. When completing a transaction through the Nevada Department of Motor Vehicles (DMV), such as an application for a new driver’s license or a Nevada Identification Card, a renewal, or an address change, individuals will be registered to vote automatically unless they affirmatively decline in writing their intent to opt out of voter registration. It is effective upon passage and approval. Approximately 59.6 percent of Nevada voters supported AVR at the November 2018 General Election.

Proponents of AVR argue that, since voter registration is a prerequisite for voting, elimination of barriers therein may expand the electorate and increase turnout, accordingly. Supporters view AVR as “the gold standard of modernized registration” and thus see it as the centerpiece of a suite of policies that would reform voter registration.

Prior to the 2018 General Election, thirteen (13) states, plus the District of Columbia, had implemented AVR or approved it, pending implementation. Upon passage of Question 5: The Automatic Voter Registration Initiative, Nevada joins those states, as does Michigan, which approved a ballot initiative (Proposal 3) at the November 2018 General Election that instituted AVR, along with a complement of other election reforms.

Table 2 presents the current status of the six voter registration policies that proponents have determined would create a more robust registration system overall. Information is displayed for the Intermountain West states, which situates Nevada in comparative context. Terms are defined below.

In the Intermountain West, just California, Colorado, and, now, Nevada, have AVR. In fact, California and Colorado have instituted all six policies. Utah has all voter registration policies but AVR. Along with AVR, Nevadans can register to vote electronically and/or online. Arizona has the latter two policies in place, while Texas provides only electronic registration.

Nevada currently has a Renewable Portfolio Standard (RPS) which “establishes the percentage of electricity sold by an electric utility to retail customers that must come from renewable sources.” Renewable energy sources include, amongst others, solar, geothermal, and wind. Under Nevada Revised Statutes (NRS) 704.7821, the percentage of renewable energy must reach 25 percent by 2025. The Renewable Energy Promotion Initiative proposes to double the RPS from 25 percent by 2025 to 50 percent by 2030. It is an initiative petition to amend the Nevada Constitution, which means that it must pass by a majority of registered Nevada voters in two successive general elections before it becomes part of the Nevada Constitution.

Roughly 59.3 percent of Nevada voters approved Question 6: The Renewable Energy Promotion Initiative at the November 6, 2018, General Election. Therefore, it will be placed on the ballot again at the 2020 General Election for voter approval in identical form. 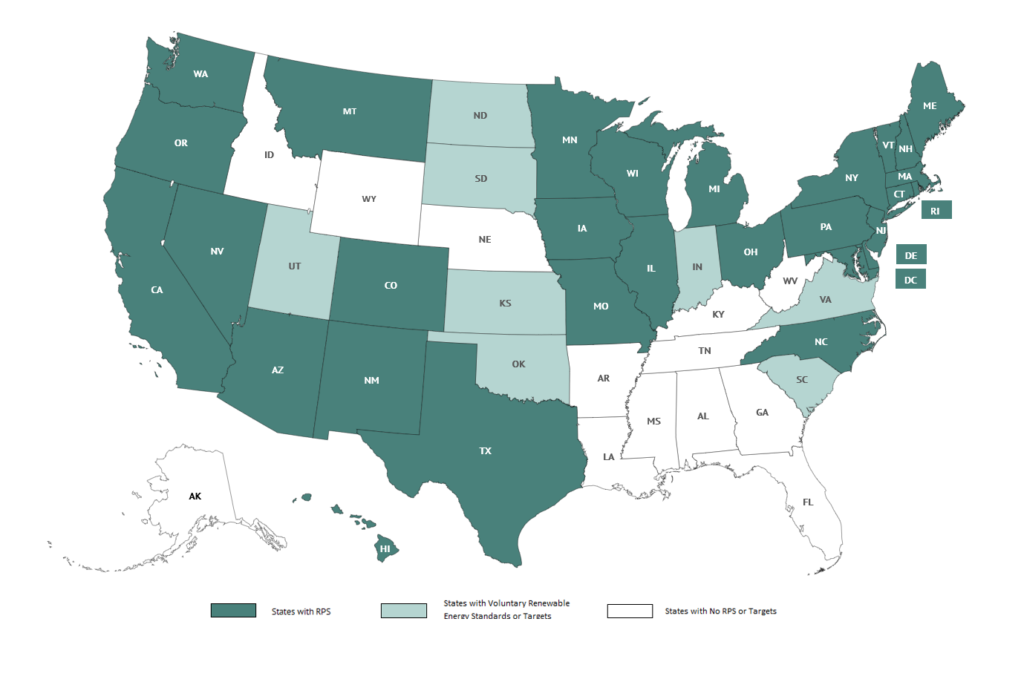 Note: Figure 3 constructed by the Guinn Center using data from the following source: the National Conference of State Legislatures.

There is no federal Renewable Portfolio Standard (RPS). However, twenty-nine (29) states—including Nevada—and the District of Columbia have Renewable Portfolio Standards. An additional eight states (Indiana, Kansas, North Dakota, Oklahoma, South Carolina, South Dakota, Utah, and Virginia) have voluntary renewable energy standards/targets, which may be understood as goals, rather than mandates. Were The Renewable Energy Promotion Initiative to pass again in 2020, the Silver State would have one of the most ambitious RPS nationwide, joining California, the District of Columbia, Hawaii, New Jersey, Oregon, and Vermont as states/jurisdictions with RPSs of at least 50 percent (by a given year).

*Note: All vote results are unofficial but current as of the time of this writing.