Decision makers and stakeholders have long recognized that the relative scarcity of federal grant dollars is problematic for the state. Implementation of such measures as the establishment of the Nevada State Grant Office in 2011, with expansion of its scope in 2017, along with the formation of the Nevada Advisory Council on Federal Assistance (NACFA) in 2015, have begun to remedy the problem.

Two pieces of legislation proposed in the current (80th) Legislative Session, Senate Bill (SB) 205 and SB 206 offer policy solutions that may eliminate some of the structural impediments identified by stakeholders as limiting Nevada’s ability to increase the amount of federal grant money it receives. We will discuss these measures subsequently, but first, we examine the data more closely to situate the legislative initiatives in context.

A grant is defined as, “An award of financial assistance from a federal agency to a recipient to carry out a public project or service authorized by a United States law. Unlike loans, grants do not need to be repaid. Most grants are awarded to state and local governments.” As the definition suggests, grants are only one form of federal financial assistance that states receive. These include, amongst others, contracts, loans, and direct payments to individuals (e.g., Medicare, food stamps, etc.).

Grants contribute considerable financial support to states but do not necessitate an associated tax burden to obtain the revenue. In fact, about 57.0 percent of resources in the federal budget are received from individual and corporate income taxes that ultimately are returned to the states in the form of grants and other federal financial assistance. When Nevadans pay their federal income taxes, the implied assumption is that programs and services will be supported by the distribution of federal money “back home.”

Despite the paucity of federal financial assistance more broadly, total federal grant money received in Nevada has increased over time, as shown in Figure 1. 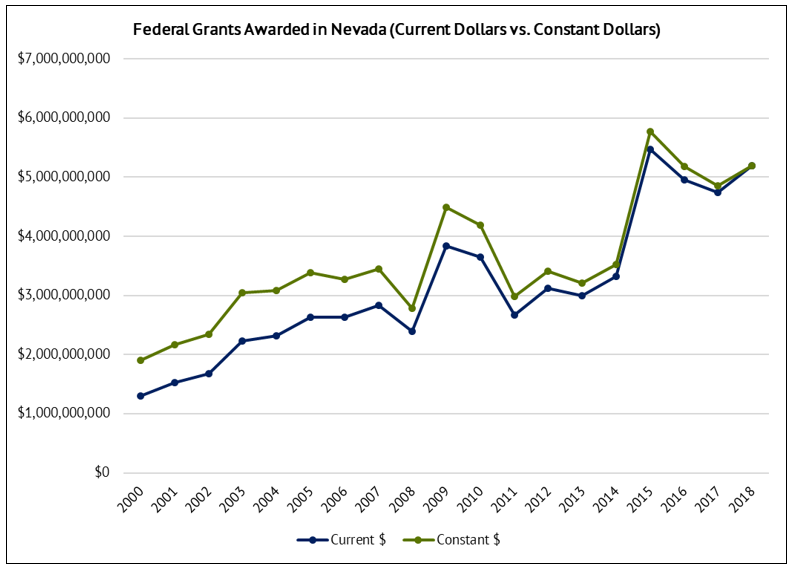 The figure indicates that total federal grant money awarded to Nevada between FFY 2000 and FFY 2018 in current dollars (not adjusted for inflation) and constant dollars (inflation-adjusted) has kept apace of inflation over the 19-year period. Federal grants awarded to the state increased steadily from FFY 2000 to FFY 2003, before leveling off through FFY 2007. Total grant money declined slightly in FFY 2008, before increasing considerably in FFY 2009 with the addition of American Recovery and Reinvestment Act (ARRA) of 2009 funds. The next spike, in FFY 2015, signifies the first full year that Nevada’s Medicaid expansion money was reflected in the federal grant award total. (Nevada Medicaid, Title XIX, is categorized as a grant, and expansion went into effect on January 1, 2014.) In constant dollars, total grants have increased by 172.4 percent between FFY 2000 and FFY 2018.

Figure 2 displays the relationship between federal grant money and all other forms of federal financial assistance.

Figure 2.     Amount of Grants vs. Amount of All Other Federal Funds Awarded in Nevada (Percentage of the Total) 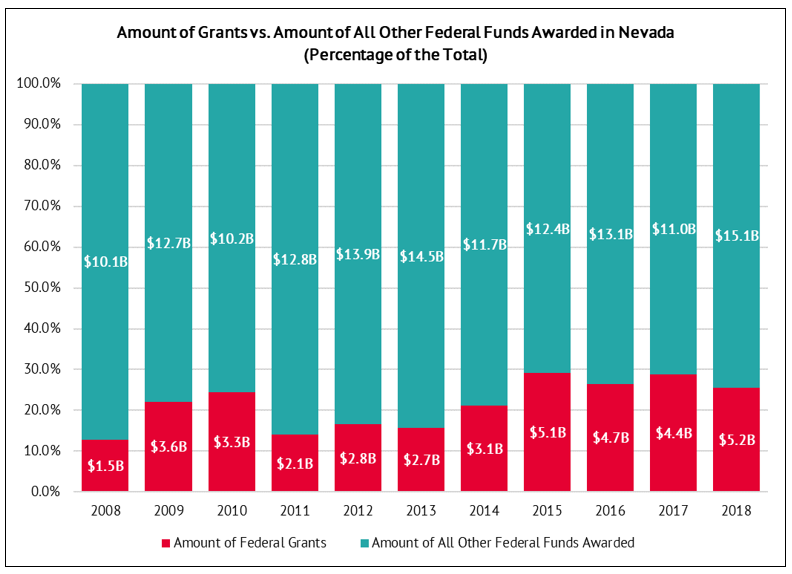 Source: USAspending.gov. Note: Each stacked column segment is calculated as a percentage of the total.

Moreover, on a per-capita basis, Nevada trails other states in receipt of federal grant money. Table 1 presents data on population-adjusted federal grant amounts for FFY 2008 through FFY 2018 for Nevada and its Intermountain West neighbors. 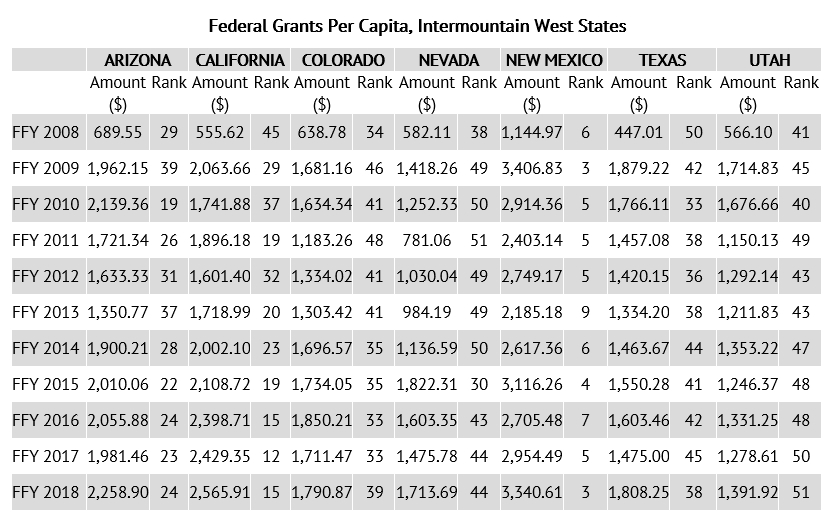 Figure 3 suggests that any understanding of the federal grant landscape in Nevada requires a grasp of Medicaid’s influence on funding.

Figure 3.     Amount of Grants Awarded as a Percentage of Amount of All Federal Funds Awarded: With Medicaid vs. Without Medicaid 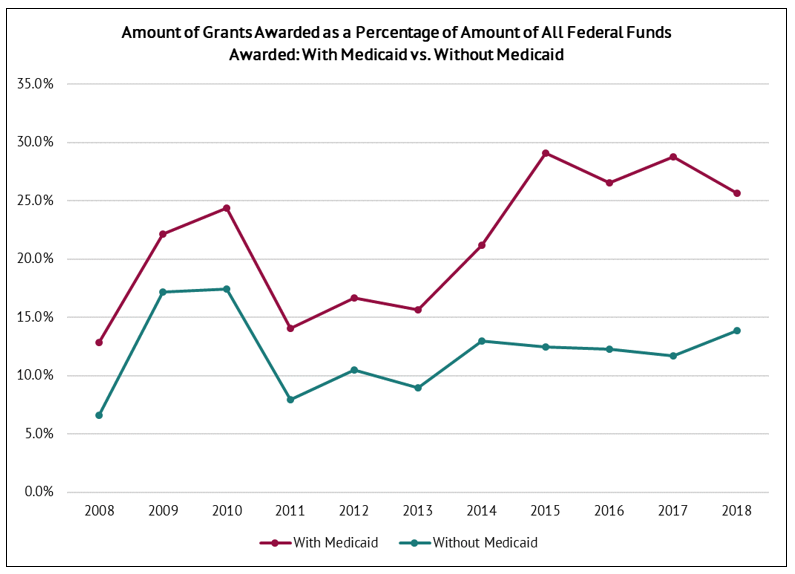 Source: USAspending.gov. Note: Medicaid refers to Nevada Medicaid, Title XIX. “Without Medicaid” is a stylized calculation, as computed by the Guinn Center.

The dollar amount of grants awarded as a percentage of the dollar amount of all federal funds awarded in Nevada is displayed here: the burgundy line is the actual data, while the turquoise line shows the hypothetical case of Medicaid exclusion from the totality of grant awards. Up until the full year of Medicaid expansion money, that is, FFY 2015, the lines correspond with one another. Beginning in FFY 2015, however, the lines diverge considerably. Actual grant dollars, as a percentage of the total, spike to the 25 percent to 35 percent range. Hypothetical grant dollars exhibit a flattening-out effect, with a slight decrease, in the 10 percent to 15 percent range. In FFY 2018, the lines begin to converge again, which might portend a lessening of the “Medicaid effect.”

In general, though, Medicaid skews the grant picture, and in so doing, suggests that Nevada’s grant performance is more robust than in actual practice. Medicaid is not the contributing factor to the state’s comparative weakness in increasing federal grant dollars—the point is that improvement over time may be attributed to Medicaid expansion, but it is not a zero-sum game. The issue pertains more saliently to competitively-awarded grants, such as project grants and cooperative agreements. These grants require an application process, with competitive review and selection, unlike formula grants, which need meet only certain statistical criteria (e.g., Medicaid).

Stakeholders in Nevada have posited that procedural and structural barriers inhibit grant procurement in the state and that administrative processes could be improved to boost competitiveness. While several impediments have been identified, two are especially pronounced and have received attention from legislators in the current (80th) Session: (1) a lack of match funding available for grants; and (2) delays in state approval for federal grant proposals. Senate Bill (SB) 205 and SB 206 in the 80th (2019) Legislative Session, respectively, propose to remedy these institutional obstacles. We will discuss each in turn.

A “’match’ is the non-federal share of costs that the grantee or the grantee’s partners are required to contribute to accomplish the purposes of the grant.” Matches may be required for cost-sharing purposes and/or to demonstrate project sustainability. Currently, Nevada has no provision in law that maintains a fund to provide match dollars, meaning that some governmental and non-profit organizations that operate on thin budgets lack the capacity to compete for grants. This can create a vicious circle, whereby a given entity does not meet the selection criteria for competitiveness but cannot receive money that would aid in service delivery.

SB 205 seeks to redress this problem by establishing a pilot program to award matching funds to certain governmental and non-profit organizations for applications in which a match is a required as a condition of the grant. It would make an appropriation of $5 million from the General Fund—Nevada’s major operating fund—over the upcoming biennium, with $2.5 million appropriated in each state fiscal year (SFY) 2020 and SFY 2021. The bill sets forth certain requirements, such as demonstrated financial need on the part of the applicant, amongst others, and the money would be awarded through the Office of Grant Procurement, Coordination and Management of the Nevada Department of Administration.

In the first hearing of the bill on March 25, 2019, supporters asserted that the legislation would eliminate a barrier to the receipt of federal grant money, driving competitiveness in the process. Given that it would be created as a pilot program, state officials would have the opportunity to quantify its efficacy. Julia Peek, Deputy Director–Programs for the Nevada Department of Health and Human Services (DHHS), testified as neutral; she observed that the agency had lost opportunities for federal grant money because of the inability to raise a match. No one testified in opposition.

SB 206 intends to ameliorate a barrier to grant administration, that is, delays in state action for federal grant approval. Existing law requires the Interim Finance Committee (IFC), which is composed of members of the Senate Committee on Finance and the Assembly Committee on Ways and Means, to approve proposed grant acceptances by state agencies. While the IFC has 45 days to render a decision on a given proposal, and if there is no action, the proposal is approved automatically, the Committee meets intermittently. This can delay application processing.

Specifically, SB 206 would standardize forms and materials to streamline the application process. It permits provisional approval for grant acceptance and reduces the IFC’s time frame for official approval to 30 days from 45 days. The proposed legislation would “create alignment between the state process and the federal process that cannot change in order to reduce a grant barrier,” as Executive Grant Analyst JoVon Sotak (Office of Grant Procurement, Coordination and Management) testified during the first hearing of the bill on February 27, 2019. As Ms. Sotak noted, processing grant acceptance requests can take anywhere from 45 to 120 days. However, many grants are short-term in nature (e.g., one-year money), and this can mean that implementation for certain grants may commence well into the execution window. This can translate into a loss of money if the federal government requires reversion upon expiration and also may disincentivize federal partnerships over the long term.

With a possible economic downturn on the horizon, significant revenue dependence on a tourism-based economy in which Las Vegas visitation reached a four-year low in 2018, and commitments from Governor Steve Sisolak and some legislators to maintain the current revenue structure, Nevada may need to devise creative solutions to fortify revenue streams. The elimination or reduction of barriers that impede grant procurement and administration could lay such a foundation.