Another new release from the U.S. Bureau of Economic Analysis provides prototype statistics of quarterly gross domestic product (GDP) by state for the years 2005 through 2013. The numbers furnish a more complete picture of the ups and downs, and turning points, in economic growth at the state level. The statistics include both current dollar and inflation-adjusted (2009) dollars for 21 private industry and government sectors within the states.

Nevada ranked fifth among the states in the fourth quarter (Q4) of 2013 with a healthy 4.7 percent change in real GDP. That performance followed a volatile prior year in which the State’s GDP increased 4.5 percent in Q1, declined 1.0 percent in Q2, and increased 0.6 percent in Q3. Current dollar GDP in the Silver State, however, increased steadily from about $131 billion in Q1 to almost $134 billion in Q4, contributing a consistent 0.8 percent of the total U.S. GDP throughout the last year.

Detailed figures for Nevada clearly show the State’s economic growth, decline and slow recovery during the years before and since the Great Recession (see Figure 1). Real GDP was slightly more than $128 billion in 2005 and reached a peak of almost $139 billion in Q4 2007.

As the recession took hold over the next two years, Nevada’s real GDP declined to its low point just below $118 billion in Q1 2010. Since then, the State has experienced a fairly slow but steady increase in real GDP, reaching nearly $125 billion in Q4 2013, but still well below its pre-recession high. 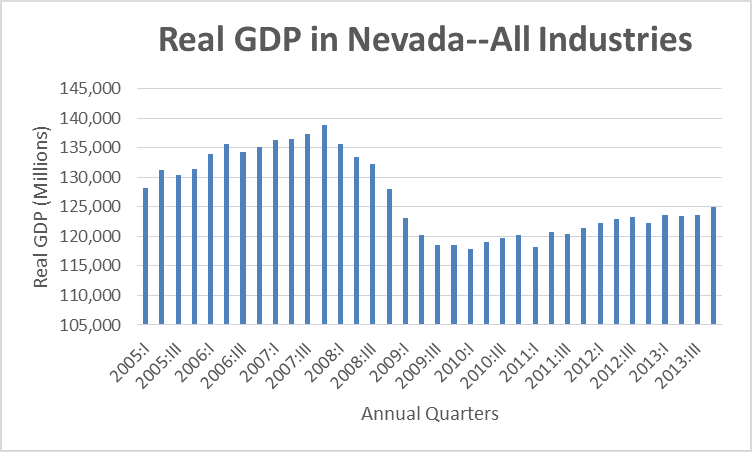 The following charts highlight the five major categories of industries in Nevada that contribute significantly to the State’s real GDP. The “Other” category includes 16 private industry groupings that individually contribute less than 6 percent to the Silver State’s GDP. Examples of the industry groupings in the “Other” category include finance and insurance; professional, scientific, and technical services; health care and social assistance; transportation and warehousing; manufacturing; arts, entertainment, and recreation; and mining, among others.

Figure 2 presents the major industries and their contributions to real GDP as of Q4 2007, right before the Great Recession. 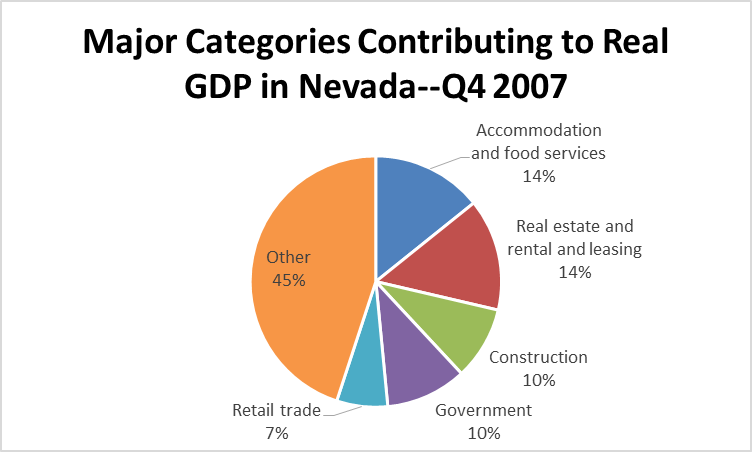 Figures 3 and 4 show that the construction industry took the major hit in Nevada at the height of the recession, and has yet to recover significantly.

Within the “Other” category for Nevada, which showed some gains during the period, major increases were seen in the categories of mining; health care and social assistance; and transportation and warehousing — although they all remained at less than 6 percent of the State’s GDP. 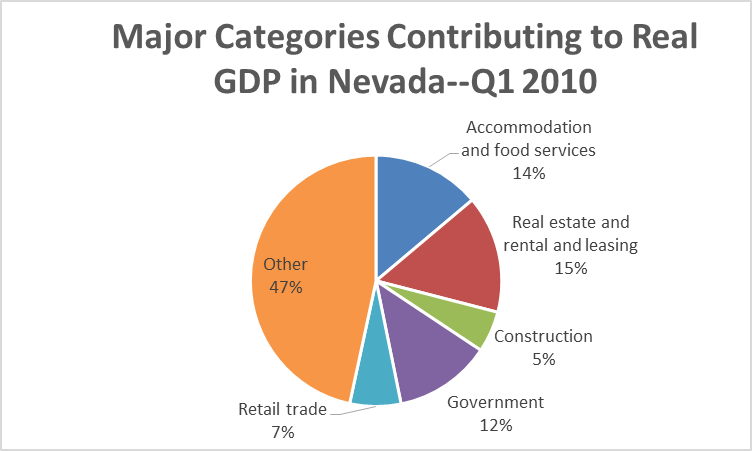 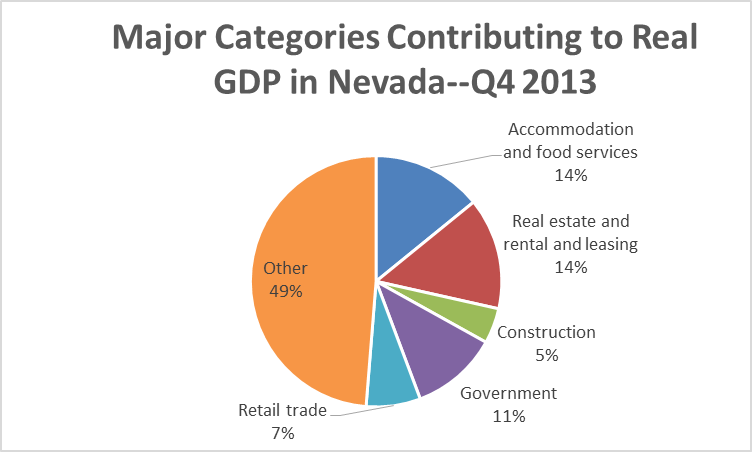 This GDP data can be useful in analyzing the progress of efforts to diversify Nevada’s economy. The Governor’s Office of Economic Development (GOED) has identified nine key industries for growth, including: aerospace and defense, agriculture, information technology, energy, health care, logistics and operations, manufacturing, mining, and tourism and gaming. The current GDP data indicates some success in expanding the contributions of health care, logistics and operations, and mining activity to the state’s economy. The Guinn Center will continue to follow GDP and other related numbers in its efforts to provide data-driven analysis of economic development in Nevada.