A new report from the U.S. Bureau of Economic Analysis shows that consumer spending in Nevada was deeply affected by the Great Recession. While this measure has improved in recent years, per capita consumer spending is still below pre-recession levels. Consumer spending is measured through an indicator called personal consumption expenditures (PCE). This data provides insight into consumer activity, along with household economic health and spending patterns.

During years of rapid economic growth from 1998 through 2007, Nevada’s annual percentage growth in PCE was at the top or among the leading states. Perhaps reflecting the beginnings of the housing crisis, Florida (-0.4 percent) and Nevada (-0.3 percent) were the only states in 2008 that suffered a decline in total PCE.

In 2009, the height of the recession, PCE declined by 1.6 percent nationally. The economic decline was evident in all but 8 states. Nevada had the largest drop at -4.6 percent, followed by California at -4.1 percent.

All states have experienced increases in total PCE from 2010 to 2012. While Nevada’s increase has lagged the national average, a positive sign is that the Silver State’s 3.8 percent increase in 2012 was close to the 4.1 percent average nationwide (see Table below). 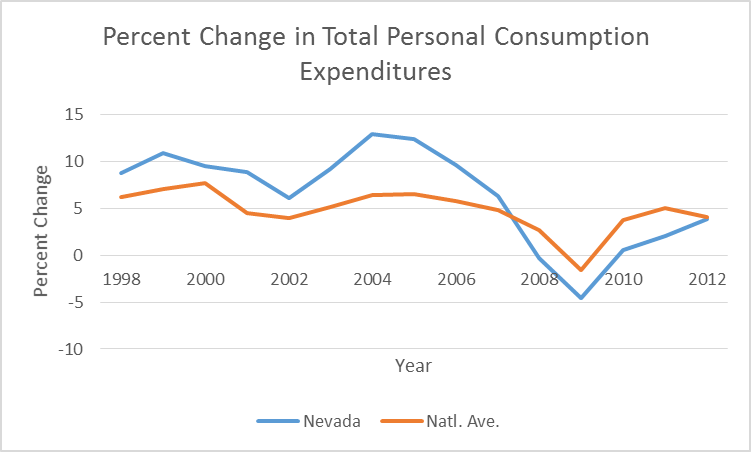 Nevada’s $29,514 per capita total PCE in 2012 remains well below the national average of $35,498 and remains under Nevada’s per capita high point of $30,976 in 2007. But in certain categories of consumer spending, the State is at or close to the national averages (such as housing and utilities, gasoline and other energy goods, and food and beverages for off-premise consumption).

Consumption is an important driver of economic growth. Increasing PCE in Nevada suggests that the Silver State’s economic recovery has some legs. The Bureau of Economic Analysis’s new report will be beneficial to businesses in making better decisions about hiring and investing. It provides another tool for analyzing consumer activity at the state level, and can be useful to state and regional policymakers for fiscal analysis and by businesses for assessing state and regional markets. The Guinn Center will continue to monitor and report on such data in conjunction with its research programs on budgeting and economic development.