Earlier this month, CNBC released its America’s Top States for Business, a ranking of all 50 states based on their economic climate and competitiveness. The annual study analyzes all fifty states on 64 metrics across ten categories. States are graded based on the qualities they believe are most important in attracting businesses. To do that, categories are weighted based on each state’s emphasis on that category. The categories compiled by CNBC and their accompanying weights are:

In 2019, the top ranked five states in overall economic competitiveness are Virginia, Texas, North Carolina, Utah, and Washington; Nevada ranks 29th. Further comparisons to the other states in the Intermountain West region suggest that Nevada’s business environment is being edged out by its regional neighbors, although it is ranked ahead of California and New Mexico (see Table 1). As shown below, Nevada’s two highest rankings, Economy and Infrastructure, are both ranked 11th. Nevada’s lowest category, Workforce (which is also the highest weighted category), ranks 48th. Business groups and trade associations in Nevada recognize that a trained workforce is critical to economic development. As such, the Silver State’s dismal Workforce grade, combined with other low rankings in Education (45th) and Innovation & Technology (44th), could reduce Nevada’s attractiveness as a place to do business and dampen long term growth.

Comparing Nevada’s ranking over time provides some interesting insights about the areas where Nevada stands head and shoulders above many other states. Figure 1 shows Nevada’s highest ranked categories over the period 2007 to 2019. Following the Great Recession, Nevada ranked 47th overall, which is significantly lower than its current ranking of 29th. As shown, the Cost of Doing Business ranking has increased significantly from a low of 41st in 2007 to 15th in 2019. This ranking echoes other studies that have also given Nevada a positive assessment on its business tax climate. Additionally, while Nevada’s Infrastructure and Economy rankings were affected by the Great Recession, Nevada has bounced back to new highs. As we noted in our recent report, A Step Up: Economic and Financial Security for Nevada’s Families, Nevada is among the highest-ranked states in job and personal income growth, coupled with steadily increasing output (measured as gross state product) and steadily declining unemployment. 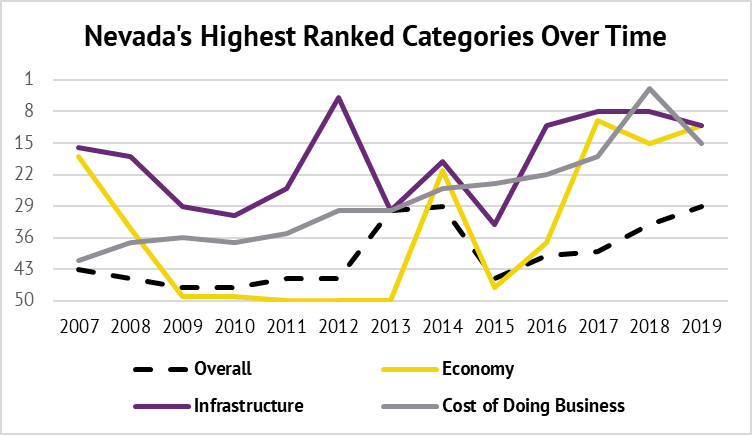 Examining Nevada’s lowest ranked categories in 2019 reveals that the Silver State has struggled (relative its peers) to maintain a competitive workforce and that its education (both K-12 and higher education) systems continue to lag relative to its peers. Figure 2 shows Nevada’s lowest ranked categories 2019 over the past 12-year period. In the past few years, the Education category has seen modest improvement, finally moving from a rank of 49th-50th to a rank of 45th. This tick upward may reflect the gains of the significant investment in K-12 made by Governor Sandoval and the Nevada Legislature in recent years.

As shown, the Silver State was able to maintain a high-quality workforce throughout the Great Recession, ranking within the top 20 from 2008 to 2014 with a peak of 13th in 2012 and 2013. In 2014, Nevada’s Workforce rank decreased dramatically and has continued to fall. In 2019, Nevada ranked 48th in Workforce. Figure 2 also shows how the state’s Technology and Innovation ranking has also steadily decreased over the last decade from a high of 28th in 2007 to 44th in 2019. 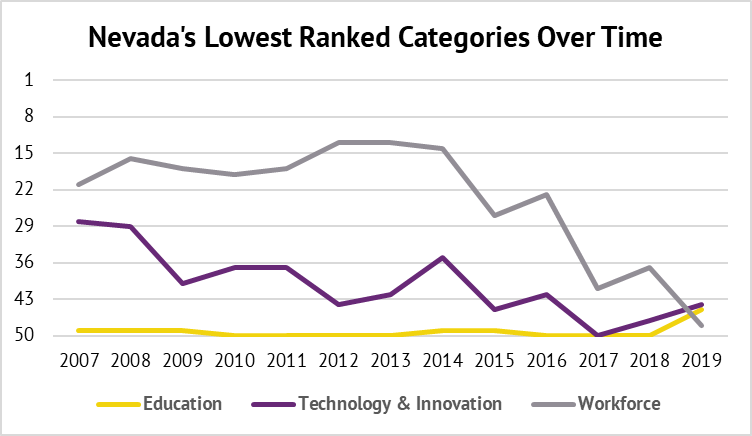 One of the individual metrics of the Workforce category is the proportion of STEM jobs in a state; the CNBC study acknowledges the concentration of these jobs in a local economy is the benchmark for what determines a highly skilled labor force. In a 2013 study the Brookings Institution concluded that STEM-oriented economies perform more strongly on several economic indicators including job growth, employment rates, patents, wages, exports, and income equality. According to the U.S. Bureau of Labor Statistics, in 2018, Nevada had the second lowest percentage (3.4 percent) in the nation when comparing each state’s workforce employed in STEM fields. Only 4. 5 percent of metropolitan Reno’s workforce is employed in STEM fields, and only 2.9 percent of Las Vegas-Paradise metropolitan area’s workforce is employed in STEM fields. For greater context, of the 37 metropolitan areas across the nation with a workforce population of at least 800,000, the average percentage of the workforce in the STEM fields is 8.1 percent; Las Vegas and Riverside were tied for last place (2.9 percent).

In recent years, Nevada has been trying to strengthen STEM pathways. The Nevada Governor’s Office of Science, Innovation & Technology and its STEM Advisory Council has been working to expand and coordinate STEM programming across the Silver State. Senate Bill 200, passed in 2017, seeks to expand computer science education to ALL students in Nevada. Some of the provisions include:

Another metric within the Workforce category is educational attainment. As we have reported previously, enrollment in post-secondary education and college attainment rates (the percentage of Nevadans with a higher education degree) continue to lag in the Silver State. In fact, college attainment is well below the national average. As of 2015, less than one-third (31 percent) of our Silver State’s population (age 25-64) has an Associate’s degree. In recent years, Nevada’s legislators have tried to increase educational attainment by creating the Nevada Promise Scholarship program and revising the Silver State Opportunity Grant’s credit requirements.

Nevada’s low ranking in Technology and Innovation, provides a further glimpse at the areas of economic development where the state is lagging its peers. Listed as criteria within the category is the quantity of patents issued per state and the quantity of research grants secured within each state for health, science, and agriculture. The National Institute of Health (NIH) and the National Science Foundation (NSF) both provide yearly reports on the allocation of their funding by state, while, the United States Patents and Trademark Office (USPTO) also provides annual figures regarding patents. Although these datasets provide only a small sample size of research funding grants allocated to states and do not speak to the success or efficacy of patented products, they provide useful context for how Nevada compares to other states regarding health and science research and product innovation. When looking only at NSF research grants, Nevada ranked in the bottom 15 states in terms of total value of grant awards and number of NSF grants.

The recent CNBC study suggests that in order to improve its standing as an attractive place to do business, Nevada must continue to adopt policies that strengthen its K-12 and higher education systems and college and career pathways, especially in STEM fields. To this end, decision-makers need to work more effectively to achieve greater alignment between K-12 systems, higher education institutions, and our workforce development agencies and programs. Efforts such as the “New Nevada Jobs Coalition” led by the Economic Development Agency of Western Nevada (EDAWN) could help improve alignment and strengthen pathways for our Silver State residents.