Charter schools are public schools that are independently run and receive greater flexibility over operations and management in exchange for increased performance accountability. These schools may operate like traditional public schools with their own buildings and campuses (referred to as “brick-and-mortar” schools). Some may only offer remote online instruction (“virtual charter schools”), and still others may provide some combination of remote and in-class instruction (‘blended” or “hybrid” charter schools). Virtual public charter schools are an important educational option for many students and families in Nevada, but enrollment in these schools remains relatively limited. In Nevada, 1.2 percent of students, or 5,712 students out of total K-12 enrollment of 485,768, were enrolled in virtual charter schools during the 2017-2018 school year.

Table 1 compares performance data across different types of schools in Nevada using the state’s accountability framework, the Nevada School Performance Framework (NSPF). As displayed in Table 1, the average star rating is lower for state-sponsored elementary and middle school virtual charters than for other types of schools. Among high schools, both district-sponsored and state-sponsored virtual high schools have the lowest star rating among all categories of schools. 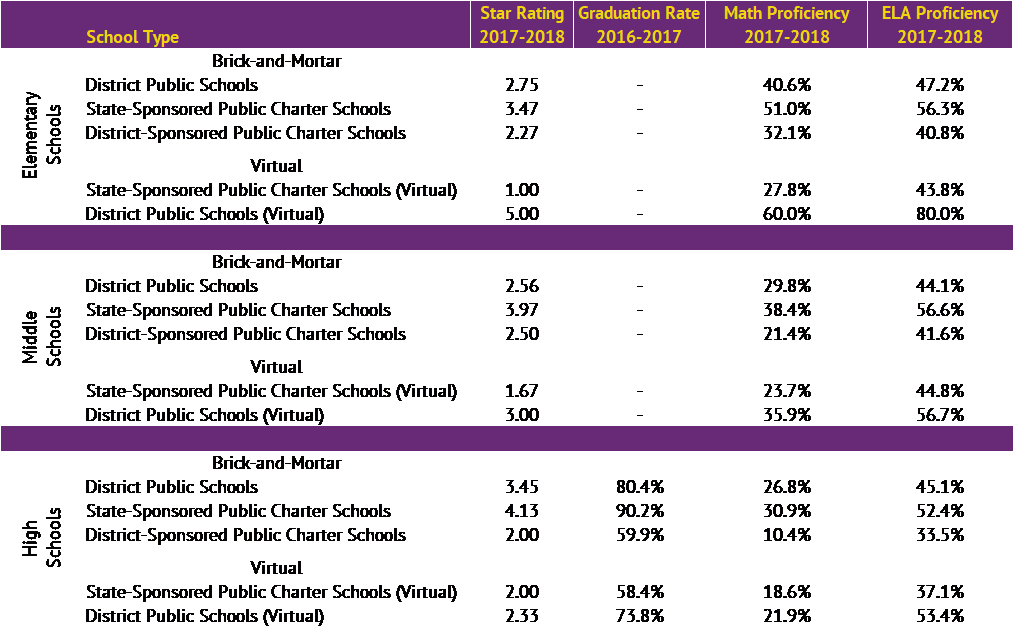 Against the backdrop of the national reports, the Guinn Center examined the performance of virtual charter schools to determine how these schools are performing compared to other educational options. We invite interested readers to the download the full report, but for simplicity, the conclusions are summarized below. In the report, each conclusion is fully supported by data obtained from the Nevada Report Card.

These findings, suggesting the inconsistent (and often low) performance of virtual charter schools operating in the state, have also received the attention and scrutiny of some lawmakers and the SPCSA. The current law (Nevada Revised Statute 388A.330) states that the sponsor of a charter school can reconstitute the governing body of a charter school, revoke the written charter, or terminate a charter contract for the following reasons:

Given the low performance of virtual charter schools and the potential for several of these schools to have its charter revoked or the governing body reconstituted within a few years, the Guinn Center suggests the charter schools, SPCSA, and legislators consider the following actions: