What Is the Economic Forum?

The Economic Forum meets in December of even-numbered years to provide forecasts for the unrestricted revenue portion of the General Fund. That forecast is binding on the Governor’s Recommended Budget for the upcoming biennium. The Forum meets again in May of odd-numbered years, during the Legislative Session, to submit revised projections for the General Fund’s unrestricted revenue. These forecasts are binding on the Legislatively Approved Budget. Two additional meetings—one in December (odd-numbered years, e.g., 2019) and June (even-numbered years, e.g., 2020)—are held to update the status of actual General Fund revenues relative to forecasted amounts.

The forecasts rely on global, national, and statewide economic indicators. The Economic Forum projects expected revenue for each statutorily-required source that is deposited in the General Fund. These revenue sources may be subdivided further into two categories: major General Fund revenues and non-major General Fund Revenues.

A major fund is one in which its “total assets, liabilities, revenues, or expenditures/expenses… are at least 10 percent of the corresponding total for all funds of that category or type.” Non-major General Fund revenues include all other taxes; licenses; fees/fines; use of money and property; and other revenue collected by the State. The distinction between major and non-major General Fund revenues is important, as members of the Economic Forum’s votes on each major revenue source are carried out on an individual basis, whereas non-major revenues are grouped together for a single vote.

How Did the Economic Forum’s Projections Change from December 2018 to May 2019?

The Economic Forum revised its overall forecast upwards slightly between December 2018 and May 2019. Unrestricted General Fund Revenue, net of Commerce Tax credits and other tax credit programs, is projected to be about $8.8 billion for the upcoming biennium (that is, FY 2020 and FY 2021). The forecast is roughly $11.4 million higher than the December estimates, for a 0.1 percent increase. For comparative perspective, at the May 2017 meeting of the Economic Forum, the forecast increased by $95.8 million (1.2 percent) over the December 2016 projections.

Economic indicators suggest that the Silver State’s economy is strong. In fact, Nevada has the fastest-growing economy in the country with respect to jobs coming online. Wages are growing quickly, especially in the manufacturing and professional services sectors. However, many economists predict that the U.S. economy is headed into a slowdown by the end of 2020, which is Fiscal Year (FY) 2021. This could have a knock-on effect on Nevada’s economy. Daniel White, an economist with Moody’s Analytics, who testified before the Economic Forum, identified three reasons a downturn might be expected:

Analysts noted that Nevada’s increased economic diversification over the past 10 years may help insulate the economy from the potential slowdown. And, according to the Moody’s analyst, the downturn is likely to be a “Wall Street” recession (i.e., focused in the financial markets) and/or a “growth” recession (i.e., whereby Gross Domestic Product, or GDP, does not decline but rather continues to grow year over year, albeit at a slower pace than during expansion).

The Economic Forum’s approval of a forecast that exercises restraint indicates its members’ mindfulness of this context and careful consideration of the relevant indicators.

Table 1 presents the Economic Forum’s General Fund revenue projections for the upcoming biennium, by source, at the summary category level, for December 2018 and May 2019. Between December 2018 and May 2019, the Economic Forum projected all but two tax categories to increase incrementally. For example, the total sales and use tax, which makes up the largest share (30.2 percent) of the General Fund, as shown in Figure 1, increased by just $11.4 million (0.4 percent) between the two forecasts. Likewise, total state gaming taxes, which comprises the second-largest share of the General Fund (18.0 percent) increased by only $1.1 million (0.1 percent).

Total mining taxes and fees were revised down by about $17.0 million between December 2018 and May 2019, for a 13.8 percent decrease. The real property transfer tax, discussed further below, also decreased over the period.

Of non-tax revenue, only total other revenue (e.g., Hoover Dam revenue, miscellaneous sales and refunds, etc.) enjoys a forecasted increase. Licenses, fees/fines, and use of money and property are expected to decrease.

Overall, major General Fund revenues are approximately $34.3 million higher than what was estimated at the December 2018 meeting of the Economic Forum, for a 0.5 percent increase.

What Are the Implications for the Budget?

The Ways and Means Committee in the Nevada Assembly and the Finance Committee in the Nevada Senate deliberate in joint subcommittees, who report their budget recommendations to the full committees, which then vote on individual departmental funding. After the agency budgets have been approved, they are rolled into five budget implementation bills for floor votes: the K-12 Education Funding Act, the Appropriations Act, the Authorizations Act, the State Employee Compensation Act, and the Capital Improvement Plan Act. All must be enacted before the regular session adjourns. After approval, the entire budget is referred to as the Legislatively Approved Budget.

However, the Nevada Legislature has discretion over the use of the additional $11.4 million approved by the Economic Forum for FY 2020 and FY 2021. It is obligated to balance General Fund appropriations with General Fund revenues for biennial budgeting and must use the Economic Forum’s May 1, 2019, forecast in so doing.

The additional $11.4 million approved by the Economic Forum could raise the Governor’s Recommended Budget by about 0.04 percent. But the amount may be subject to revision. As Russell Guindon, Principal Deputy Fiscal Analyst, Fiscal Analysis Division (Legislative Counsel Bureau) observed during the May meeting of the Economic Forum, members also approved an increase to the FY 2019 forecast. While this money technically is “assigned” for the current biennium, the Nevada Legislature has some flexibility over its allocation. It is revenue that legislators can take into consideration when building the 2019-2021 biennial budget. These additional available resources can be spent in FY 2019 or carried forward into the upcoming biennium to fund programs and services. The FY 2019 forecast is roughly $31.4 million, which would bring the total additional three-year amount to about $42.8 million. 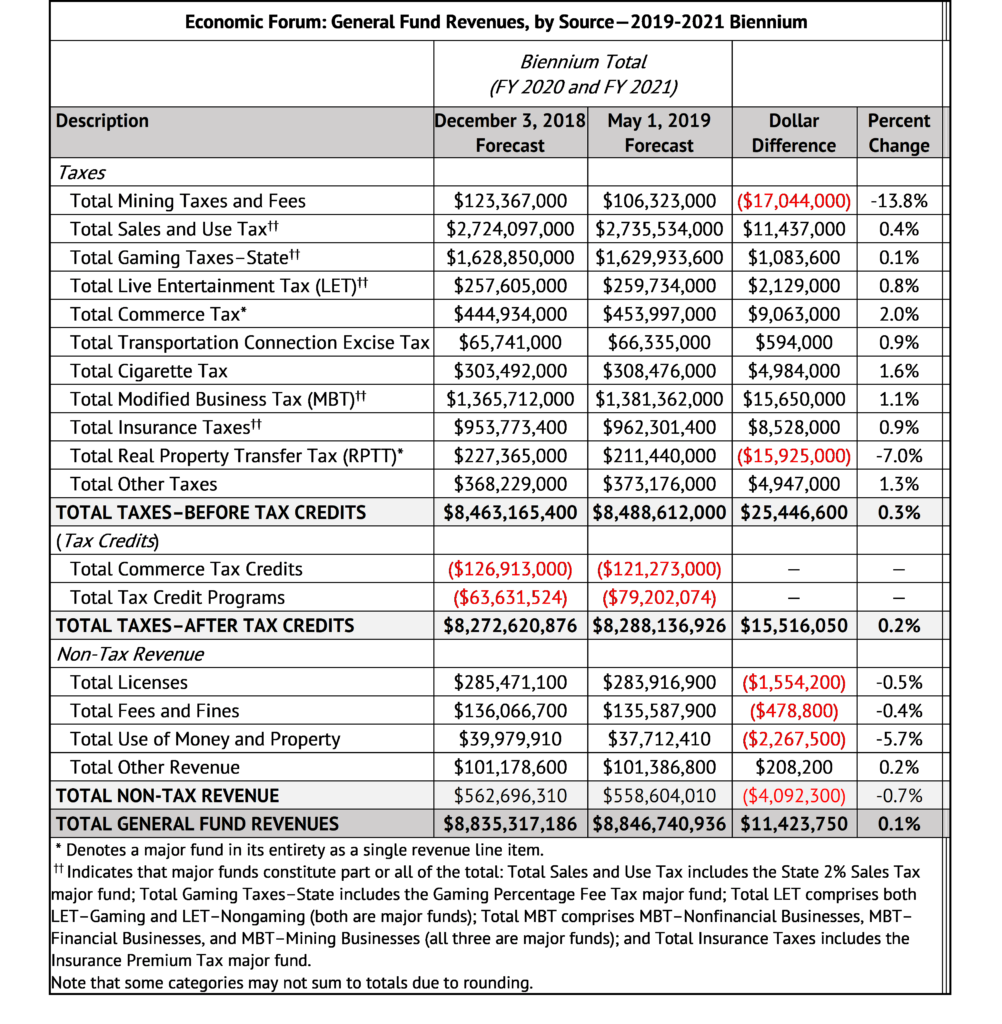 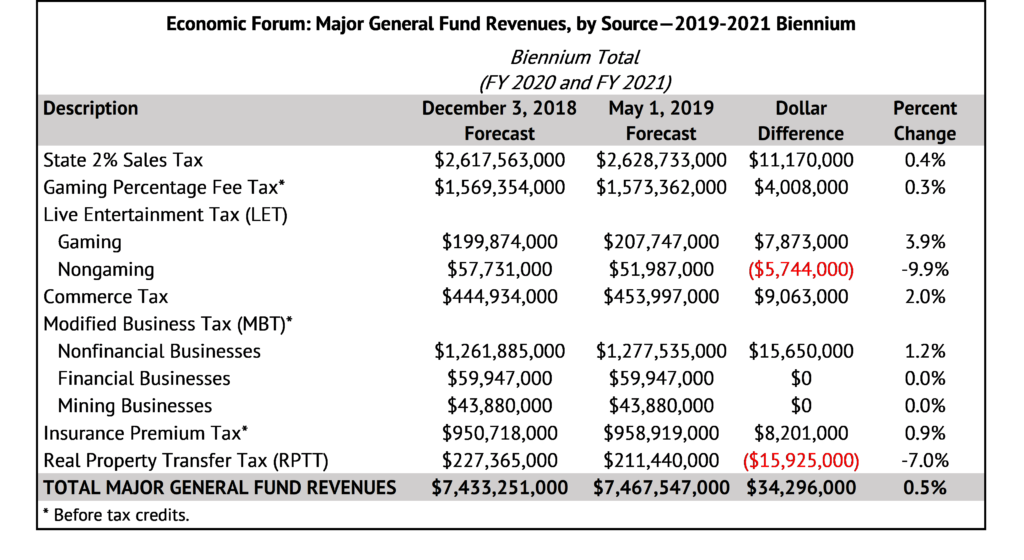 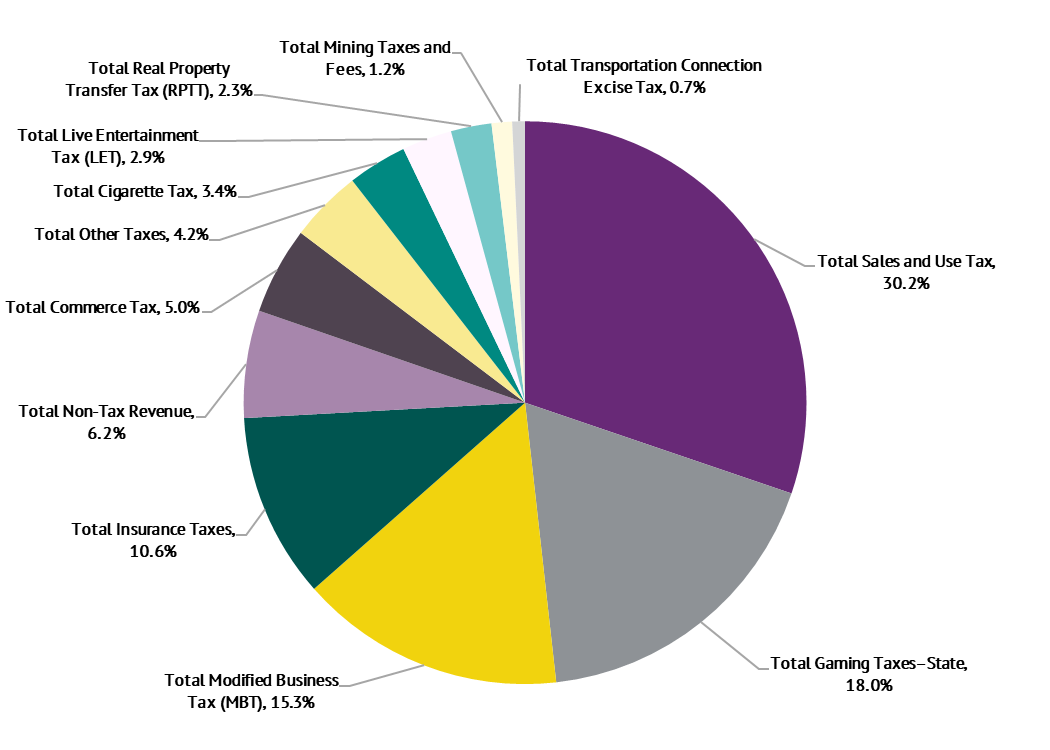