The Economic Forum is a state-mandated panel that convenes periodically to submit revenue projections for the General Fund—Nevada’s major operating fund—to the Governor and the Legislature. The Economic Forum meets in December of even-numbered years to provide forecasts for the unrestricted revenue portion of the General Fund. That forecast is binding on the Governor’s Recommended Budget for the forthcoming biennium. The Forum meets again in May of odd-numbered years to submit revised projections for the General Fund’s unrestricted revenue. These forecasts are binding on the Legislatively Approved Budget. Two additional meetings—one in December (odd-numbered years, e.g., 2019) and June (even-numbered years, e.g., 2020)—are held to update the status of actual General Fund revenues relative to forecasted amounts.

There is no statutory requirement to consider and/or approve a revised General Fund forecast, even under extraordinary circumstances at the June meetings of the Economic Forum in even-numbered years. While the economic fallout from the COVID-19 pandemic has resulted in an anticipated $812 million shortfall in General Fund revenue, it is not expected that Governor Steve Sisolak will call for the Economic Forum to revise its revenue estimates. However, there is precedent for forecast revision between regular meetings, as permitted by statute: for example, the Economic Forum revised its official General Fund revenue forecasts in January 2010, during the Great Recession.

On Wednesday, June 10, 2020, the Economic Forum convened to hear updates on outlooks for state employment and General Fund revenues. Here, we summarize the highlights from the June 2020 meeting of the Economic Forum.

David Schmidt, Chief Economist, Research and Analysis Bureau, Department of Employment, Training and Rehabilitation (DETR), presented the state employment outlook. Mr. Schmidt described the current employment situation as “unprecedented,” stating that he had “never seen anything like it.”

The state unemployment rate of 28.2 percent (as of April 2020) is the highest of any state in any month in series history, which dates back to the 1970s. It is comparable to estimates of the worst points of the Great Depression. The current unemployment situation is similar to the Great Depression in the magnitude of dislocation, but unlike the Depression, significant income and wage supports are available. For example, unemployment insurance and Social Security were not implemented until the mid-1930s, after the deep economic impacts had been felt for many years.

The present economic circumstances differ from a “normal” recession, which typically results from a long, slow decline in economic activity and permits a more gradual adjustment within the labor force. The historically high current unemployment rate stems from an economic shock, specifically, the abrupt policy-driven closure of non-essential businesses, necessitated by the public health exigency of the rapidly spreading coronavirus.

In February 2020, prior to the shutdown, Nevada’s unemployment rate was at an historical low of 3.6 percent. Nevada’s employment growth was increasing faster than the United States as a whole and had been tracking at double the U.S. rate since 2014. The national 128-month economic expansion peaked and ended in February 2020, meaning that the U.S. (and Nevada) is officially in a recession. Mr. Schmidt indicated that how Nevada moves forward will depend on sentiment of consumers and workers and how quickly people will engage in the economy. There should be improvement, but recovery likely will recede to a “regular” recessionary level, not the historical unemployment low.

The unemployment rate for April 2020 has been reported at 28.2 percent, as noted above. Unemployment insurance (UI) claims suggest that more than 500,000 Nevadans have been affected by pandemic-related employment losses, which is about one-third of the economy. This suggests that the unemployment rate might be closer to 35 percent. Non-farm job levels are down 254,800 or about 18.0 percent over the year; this translates into a loss of 266,500 jobs over two months.

There have been declines in employment in every industry. The industries most significantly affected are those in the tourism sector, such as accommodations (hotels) and casinos, as well as office support and other services. While not many industries are growing, employment losses in essential businesses are not the same as in non-essential businesses. Mr. Schmidt observed that, “retail trade did not decline as much as one might guess, in part because significant parts of this industry were considered essential.”

Unemployment insurance payments have increased across all industries, but the scale differs by industry. The number of claims increased significantly in accommodations and food services. Mr. Schmidt noted that there are a few key industries where UI benefits, on average, could surpass average wages for the sector; among these are accommodations and food services; administrative and support; agriculture; arts, entertainment, and recreation; and educational services. Approximately $2.3 billion in total UI benefits have been paid, or about $300 million per week. However, with the caveat from Mr. Schmidt that the data may be “noisy,” DETR estimates that lost wages amount to roughly $3.7 billion in Nevada. While UI benefits have offset some of the economic pain workers have experienced, a gap of around $1.4 billion exists between the lost wages estimate and UI payments.

Taxable sales, by business category, for state Fiscal Year (FY) 2020 year-to-date (YTD) and March 2020 compared to the same period in FY 2019 show that the food services and drinking places category was affected considerably by the closure of non-essential businesses. Compared to March 2019, food services and drinking places experienced the most marked loss relative to other business categories: a decrease of 45.8 percent for a dollar difference of about $524.9 million for March 2020. However, the comparison between taxable sales for March 2019 versus March 2020 for nonstore retailers shows a 111.6 percent increase for a dollar difference of approximately $159.2 million.

Thus, the yield from nonstore retailers helped buffer some of the taxable sales losses in the food services and drinking places category. [Here we note that In-state collection of sales or use tax from remote sellers at specific retail levels is required via regulation in Nevada following the U.S. Supreme Court’s decision in South Dakota v. Wayfair; marketplace facilitators must also collect sales tax pursuant to Assembly Bill 445 enacted during the 80th (2019) Legislative Session.] Given that Nevada is highly dependent on sales and use taxes to finance its operations – they contributed about 30.0 percent to the General Fund for the 2019-2021 biennium (as approved in May 2019) – taxable sales behavior can be consequential for state revenues.

Preliminary estimates suggest that, before tax credits, actual General Fund revenues for FY 2020 will be about 4.0 percent below what was forecasted for the year. Figure 1 presents a comparison between the FY 2020 Economic Forum year-to-date (YTD) forecast and the YTD actual for major General Fund revenues. It should be noted that, as stated previously, these numbers were not approved by the Economic Forum and are thus subject to change. Moreover, there is still some uncertainty for FY 2020: some actuals are final for the year, while some are not, as revenue sources can have different reporting periods. And, given the shutdown of non-essential businesses, some actuals equal zero for certain months (e.g., the gaming percentage fee), the implications of which are not yet clear. 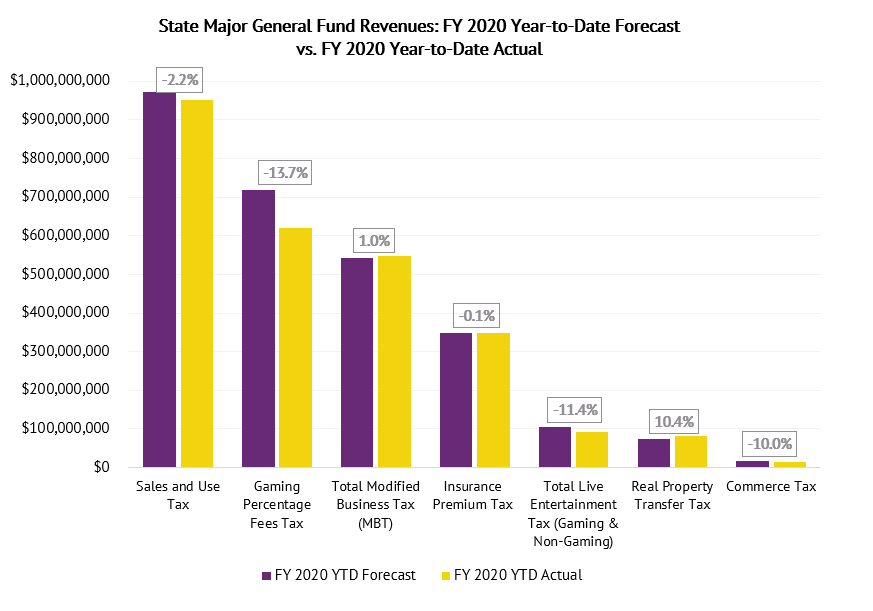 While some major General Fund FY 2020 year-to-date actuals have outperformed their forecasts, including the real property transfer tax (10.4 percent) and total modified business tax (1.0 percent), the remaining five have underperformed. The most pronounced effects are visible for those revenue sources that were affected most deeply by the COVID-19 closures, such as gaming percentage fees (-13.8 percent) and the total live entertainment tax (gaming and non-gaming; -11.4 percent). The percent difference relative to the forecast for the sales and use tax was -2.2 percent, for a dollar difference of nearly $21 million that, while second-highest among major General Fund revenues, is still well below the dollar difference for gaming percentage fees of roughly -$98.7 million.

The Interim Finance Committee will receive a report regarding the Economic Forum at its next meeting on June 12, 2020. The Interim Finance Committee will also consider a request for approval of the set-aside of reserves, or cuts to state agencies’ General Fund operating appropriations, to address the projected General Fund revenue shortfall for FY 2020.