The Economic Forum meets in December of even-numbered years to provide forecasts for the unrestricted revenue portion of the General Fund. That forecast is binding on the Governor’s Recommended Budget for the forthcoming biennium. The Forum meets again in May of odd-numbered years, during the Legislative Session, to submit revised projections for the General Fund’s unrestricted revenue. These forecasts are binding on the Legislatively Approved Budget. Two additional meetings—one in December (odd-numbered years, e.g., 2019) and June (even-numbered years, e.g., 2020)—are held to update the status of actual General Fund revenues relative to forecasted amounts.

On Tuesday, December 10, 2019, the Economic Forum convened to hear updates on outlooks for state employment and state population. In addition, they received a Nevada-specific overview of Census 2020. Lastly, analysts from the Fiscal Analysis Division (Legislative Counsel Bureau) discussed adjusted estimates to the May 2019 General Fund revenue forecasts. Here, we summarize the highlights from the December 2019 meeting of the Economic Forum, excluding the Census presentation, which is beyond the scope of this post.

David Schmidt, Chief Economist, Research and Analysis Bureau, Department of Employment, Training and Rehabilitation (DETR), presented the state employment outlook. Based on October’s numbers, total non-farm employment increased by 30,800 over the year. That represents approximately 2.2 percent growth, which is higher than the U.S. average of roughly 1.4 percent but is the state’s lowest year-over-year job growth in percentage or actual terms since 2013. The fastest-growing sectors are professional and business services, followed by construction, but no single industry is driving the growth.

The unemployment rate is around 4.1 percent, which is near Nevada’s historical low, but about 0.5 percentage points higher than the national rate of 3.6 percent. Demographic groups with high unemployment are the youngest workers (less than 24 years of age), the oldest workers (75 years of age or older), American Indians, those below poverty level, individuals with disabilities, and those with a high school degree or less.

Mr. Schmidt addressed the question of whether there is a recession on the horizon. He said that the data does suggest as much. Rather, Nevadans have become used to high rates of growth in the post-Great Recession recovery period and that many of the possible expansions have become “baked in,” translating into lower growth rates. However, there is room for continued growth, especially in the construction industry, as infrastructure is required to meet the needs of people and businesses in Nevada.

The Economic Forum received an update on the state population outlook from Jeff Hardcastle, State Demographer, Department of Taxation. Based on 20-year projections, which were released in October 2019, annualized population growth is expected to be less than one percent. The relatively low population growth rate over time is a function of the recent expansion, not something “dramatic” on the horizon. Short-term growth is expected to continue at a relatively high rate, which, on average, has been around 1.9 percent in Nevada. Compared with estimates released in October 2018, the 20-year projection for Clark County decreased by approximately 3.3 percent, while that for Washoe County increased by roughly 80.5 percent.

Notably, the Silver State’s population is aging, with growth in those aged 55 and older and those aged 65 and older. This holds true statewide, though the effect is more pronounced in Washoe County than in Clark County. This may require the State to consider consumption and spending patterns, along with delivery of services.

It is somewhat difficult to estimate net migration, as different data sources yield disparate projections. In general, though, total movers appear to be going down over time. Fewer people are likely to move, especially across state lines. Interstate migration will not be as big of a pull as it has been historically in Nevada, given aging populations elsewhere in the country, economic constraints, and lock-ins to jobs and homes.

The Reno metro area and Washoe County continue to attract in-migrants, even considering housing prices, which are relatively higher than those in Clark County. Yet, both out-migration and in-migration are possible for Washoe County, as some individuals could seek more affordable housing solutions elsewhere, while others are drawn to job opportunities, respectively.

Data from the National Low Income Housing Coalition (NLIHC), presented by Mr. Hardcastle, shows that, in 2018, an hourly state housing wage of $18.59 is necessary to afford a level of rent and utilities without paying more than 30 percent on housing, though there is some variation by county and metropolitan area. Nevada ranks 24th in the nation on the housing wage metric, which places it just above the median housing wage of $17.77 (Utah).

While members of the Economic Forum cannot revise official estimates of General Fund revenues after the May 2019 (i.e., odd-numbered year) meeting, legislation may be enacted after the forecast’s approval that require adjustments to the estimates (such as new tax policies). Under those conditions, the Fiscal Analysis Division then collaborates with the Governor’s Finance Office’s Budget Division to amend the forecast to conform with any policy changes. At the December 2019 meeting, analysts from the Fiscal Analysis Division (Legislative Counsel Bureau) presented adjustments to the General Fund forecast approved at the May 2019 meeting of the Economic Forum; these adjustments include legislative actions and approved tax credits.

Table 1 presents the General Fund forecast, by source, at the revenue category level for the current biennium (i.e., fiscal year [FY] 2020 and FY 2021). It compares the May 2019 forecast report with the adjusted forecast report. 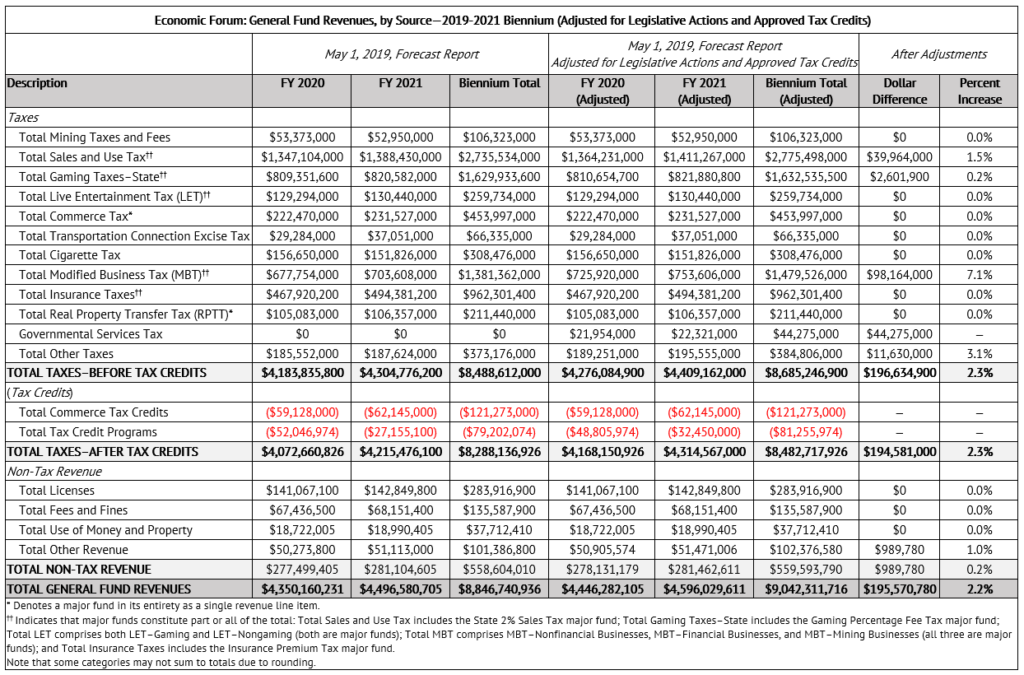 Only the following revenue categories were adjusted on the basis of legislative actions: Total Sales and Use Tax, Total Gaming Taxes–State, Total Modified Business Tax (MBT), the Governmental Services Tax, Total Other Taxes, and Total Non-Tax Revenue. We will discuss each in turn.

The collective tax policy changes are expected to raise total General Fund revenue, after tax credits, by roughly $195.6 million over the biennium, which represents a 2.2 percent increase over the May 2019 original forecast.

For additional context, Figure 1 depicts data for the current biennium graphically, with each revenue category a percentage of total General Fund revenue (before tax credits). 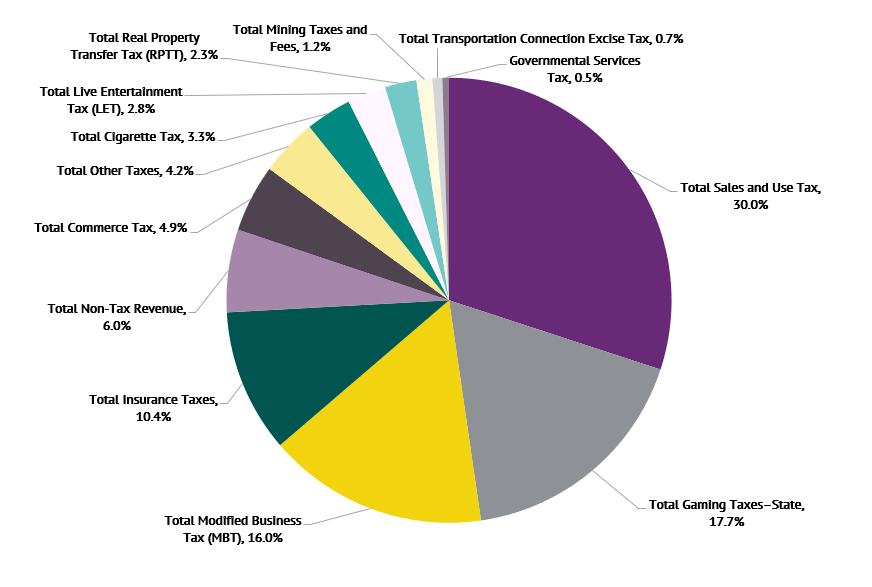 There are some minor changes over the original May 2019 forecast; specifically, Total Sales and Use Tax and Total Gaming Taxes–State represent slightly smaller shares of the total. However, since both these revenue categories were revised upwards, the changes likely can be attributed to the considerably higher contribution of the MBT to General Fund revenues and the addition of the Governmental Services Tax portion.