Readiness, preparedness, and coordination are the hallmarks of a comprehensive, proactive disaster plan that anticipates the unthinkable and can be executed with urgency. As first responders—including law enforcement agencies and Emergency Medical Services (EMS), amongst others—deployed in the immediate aftermath of the shooting in Las Vegas at the Route 91 Harvest Festival, on October 1, 2017, these traits were in full view. That medical personnel at area hospitals followed the initial response with a synchronized set of actions – designed to triage victims, minimize human loss, and mitigate the catastrophic physical effects of a mass shooting event – speaks further to the efficacy of the institutionalized procedures in place for traumatic natural and man-made disasters in southern Nevada.

Southern Nevada’s effective management of the mass casualty incident, which claimed the lives of 58 and injured more than 500, should come as no surprise to observers. In 2007, Clark County was recognized as one of seven “Model Communities” by the Centers for Disease Control and Prevention (CDC), the primary basis of which was these communities’ abilities to cement relationships and foster collaboration between EMS and public health agencies in service of disaster preparedness. And the American College of Emergency Physicians, which produces a report card on the emergency care environment, graded Nevada with a “B” on its disaster preparedness indicator, for a ranking of fifth-best in the nation. Table 1 presents the report card’s grades and rankings for Nevada and its Intermountain West neighbors across five categories.

The Silver State stands out, albeit in two contradictory ways: on the one hand, it outranks and outperforms its regional counterparts on the disaster preparedness indicator; on the other hand, with an overall grade of “D+” and “F’s” in access to emergency care and quality/patient safety environment, Nevada’s emergency care system is deficient in some areas. In fact, the disaster preparedness indicator is weighted slightly more heavily toward financial resources and state coordination than hospital capacity and personnel, which may have skewed Nevada’s grade upwards.

Integration is often touted as the key to effective crisis management. And a close look at southern Nevada’s trauma system plan reveals a commitment to coordination, collaboration, and integration across all relevant parties before, during, and after a disaster episode. But even with sufficient planning and resources, a hospital’s “success” may turn on contingency: temporary surges are only practicable if, amongst others, the requisite number of medical specialists in the area matches to the nature of injuries resulting from the crisis, the appropriate supplies/equipment are accessible, and space can be managed (e.g., through the discharge of non-critical patients).

The quality of any health care system thus hinges on the inputs that can accommodate a multiplicity of care-related eventualities, from the routine to mid-level crises to mass disaster events, perhaps even simultaneously. Nevada’s health care infrastructure ideally would be resilient, yet flexible. Ultimately, it is a question of health care capacity, which may be defined as: “…the capital investments and labor that permit the delivery of medical services.”

The mass shooting event in Las Vegas spurred concerns that the metro area had neither a sufficient number of trauma centers nor an adequate number of resources within the designated centers to cope with the casualties. The latter point pertains specifically to trauma center levels, which are categories that “refer to the kinds of resources available in a trauma center and the number of patients admitted yearly.” There are five trauma center levels, with common criteria developed by the American Trauma Society (ATS). While there is variation across states in the meaning of a given level, in general, a Level I trauma center provides the highest level of comprehensive care. 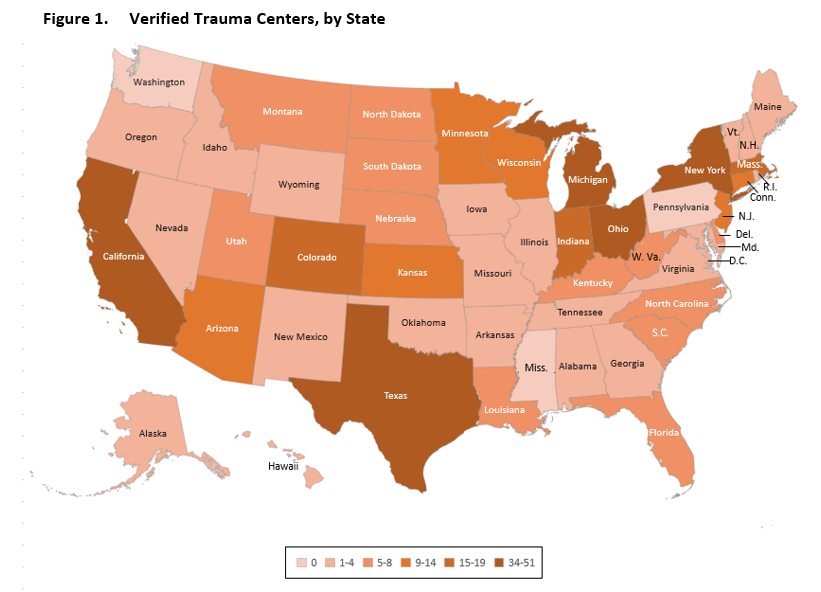 Nevada has four verified trauma centers. There is one Level II Trauma Center in Reno (Renown Regional Medical Center), and the other three are in southern Nevada: University Medical Center (UMC) (Level I Adult and Level II Pediatric); Sunrise Hospital and Medical Center (Level II); and St. Rose Dominican–Siena Campus (Level III). The day after the shooting incident, one report indicated that 104 individuals were treated at UMC, 180 people were received at Sunrise Hospital, and 58 patients were seen at St. Rose Dominican.

The trauma resources available at the time of the incident, in concert with support from other area hospitals—especially for less-critical injuries—were sufficient to manage an event of that particular magnitude. But questions have been raised regarding the number of trauma centers in the area and whether a single Level I trauma center can support a large and growing population. The questions have not been put forth in a vacuum, however. In June of 2016, the Southern Nevada District Board of Health, which is responsible for designating trauma centers in the metro area, rejected applications from three hospitals that were seeking Level III designations.

No consensus has formed either around the issue of increased quantity of trauma or Level I centers. One expert has noted, “Seriously ill patients have the best outcomes when treated at a Level I trauma center.” Another article reinforces that latter point, citing a 2006 study in the New England Journal of Medicine, which found that those with moderate to severe injuries have a 25 to 30 percent greater chance of survival if received at a Level I trauma center, relative to those taken to non-trauma centers.

However, other cities with significant populations, such as Nashville and Seattle, also each have a single Level I trauma center apiece. It may be that coordination of care and a triage system are more important than numbers alone. Others have argued that additional trauma centers may dilute the quality of care through a decreased volume of patients at any one given center, which diminishes the ability to educate medical residents and which can reduce those trauma centers’ opportunities to exploit positive network externalities (i.e., increases in volume of trauma patients are correlated with improved results, as surgeons, for example, become more adept at that specific skill set). 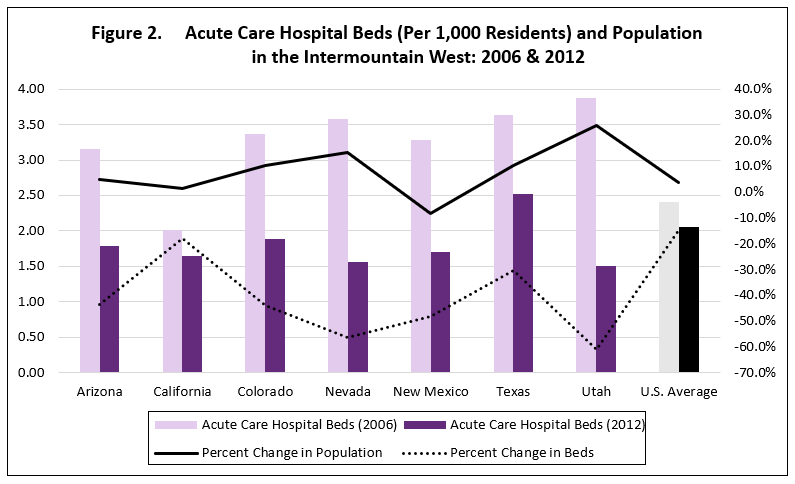 The over-time decrease puts Nevada on par with its Intermountain West neighbors, which tended to have more acute care hospital beds per 1,000 residents than the U.S. average in 2006 and fewer than the U.S. average in 2012. The majority of Intermountain West states witnessed a decline in the number of acute care hospital beds as their populations increased (Arizona, Colorado, Nevada, and Utah). California decreased its number of beds as its population contracted, as did New Mexico, while Texas increased its number of beds in accordance with its population growth.

Lastly, Nevada’s potential vulnerability under crisis conditions may be exacerbated by a problem that is familiar to the State’s residents and decision makers alike: the State’s physician shortage. All 17 counties in the State have some sort of health professional shortage designation, as designated by the country’s Health Resources and Services Administration  on the basis of high proportions of population to providers. A bipartisan measure to increase the numbers of medical residency slots nationwide was introduced in the U.S. House of Representatives in 2017, with all members of Nevada’s congressional delegation signed on as co-sponsors; Senators Dean Heller and Bill Nelson of Florida introduced companion legislation in the Senate in early June, and Senator Catherine Cortez Masto later joined as a co-sponsor.

Southern Nevada’s trauma system plan objectives suggest that an equilibrium must be achieved, such that the trauma system “…provides for trauma coverage but does not saturate and thus risk destabilizing the trauma center system.” Put bluntly, the mass casualty incident on the Las Vegas Strip may have been scalable to the region’s health care infrastructure, with propitious timing, insofar as resources were not diverted elsewhere. As the Silver State continues to evaluate its response to the tragedy, it will need to confront the broader issue of health care capacity.