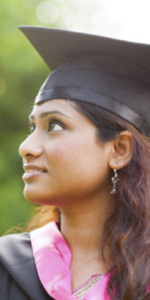 Nevada’s 2016-2017 high school graduation rate increased significantly over the prior year, jumping from 73.6 percent to 80.9 percent according to data posted on the Nevada Report Card. Around the state, various explanations have been offered for this increase. In the Clark County School District (CCSD), this increase has been attributed to weekly data shared with principals that identify students who were falling off track to graduate. The Washoe County School District (WCSD) has credited the increase to data availability that assists with tracking each student as they progress through school. A recent newspaper article cited a more disturbing reason for the increase: students at risk of not graduating may be enrolled in online courses, which might not be as academically rigorous as those taught in a traditional classroom.

Less often discussed is the recent change to graduation requirements. First affecting the class of 2017, the State of Nevada eliminated the requirement that each student must pass the High School Proficiency Exam (HSPE) prior to graduation. Interestingly, when this change is mentioned publicly, there are conflicting messages put forward as to the impact of the HSPE’s removal. At times, the message has been that the changes in requirements had no effect on the 2016-2017 graduation rates. Other times, it was suggested that a 2-3 percent increase can be attributed to the change in graduation requirements. While there has not been a formal study of the impact of the Nevada HSPE on graduation rates, prior studies from other states suggest these types of assessments depress graduation rates, and disproportionately impact minority students.

In 1977, the Nevada Legislature enacted legislation requiring a proficiency exam be given to all public school students before their completion of grades 3, 6, 9, and 12. The test was to include a reading, writing, and mathematics portion. If a student did not pass this test prior to the completion of 12th grade, that student was not allowed to graduate. This test became known as the High School Proficiency Exam. The standards for the HSPE increased in 1997 through the Nevada Education Reform Act, which added Science as a required subject. Following the adoption of the Common Core Standards by the Nevada State Board of Education in 2010, it was determined the HSPE no longer aligned with the new standards. As a result, in 2013, Assembly Bill 288 removed the requirement that students must pass the HSPE in order to graduate from high school and replaced it with end-of-course examinations in subjects to be determined by the State Board of Education. The new law applied to students graduating in the 2016-2017 school year. Finally, in the 2017 Legislative Session, Assembly Bill 7 added that the State Board of Education would also determine how the results on the end-of-course exams would factor into a student’s final grade in the class. Subsequently, the State Board of Education declared the new exams would apply to Math I and II, as well as English Language Arts. Due to the change in assessment (both in timing and content), determining how the exam would influence a student’s final grade was more difficult.

During the first two years of the end-of-course exams implementation (or for students graduating in the 2016-2017 and 2017-2018 school years), the State Board of Education required only that a student participate to pass. The reason for this was to provide two years of data for standard setting purposes. For students who will graduate in the 2018-2019 school year, the end-of-course assessments must be 10 percent of a student’s final grade. It will then increase 5 percent each subsequent year, to a maximum weight of 20 percent of a student’s final grade. With both the HSPE and the end-of-course assessments, students must comply with all other graduation requirements (e.g. credit and course requirements, as well as other mandated assessments).

As the State of Nevada moves away from the HSPE to end-of-course assessments, there remains the question of what impact do these changes have on graduation rates? In the most recent data available on the Nevada Report Card, the pass rates from the HSPE were Mathematics – 76.4 percent, Reading – 82.0 percent, Science – 78.9 percent, and Writing – 80.7 percent. These percentages suggest the HSPE was a substantial barrier to graduation for a number of students.

To visually represent the effect of the elimination of the HSPE on graduation rates, the figure below displays five years of graduation data for each public school district in Nevada. For a number of districts, the graduation rate in the 2016-2017 school year (labeled “2017” in the figure) rose sharply, corresponding to the first cohort of students that were not required to pass the HSPE. This is particularly true for the Churchill, Clark, Humboldt, Lander, Nye, Pershing, and Washoe County School Districts. While this is not conclusive evidence that the elimination of the HSPE was the sole cause of the increase in the Nevada’s graduation rate, it does suggest the increase was not isolated to a single district. 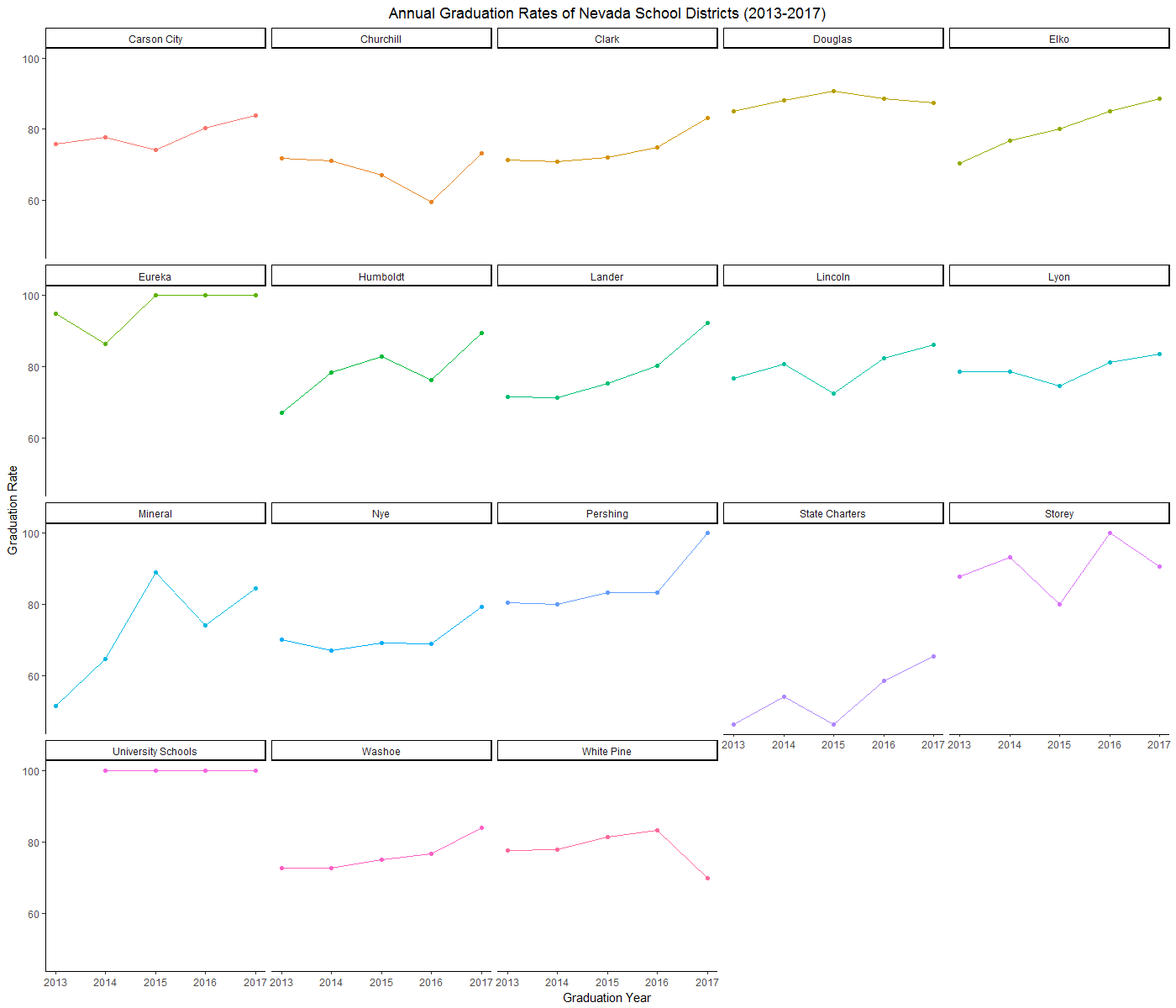 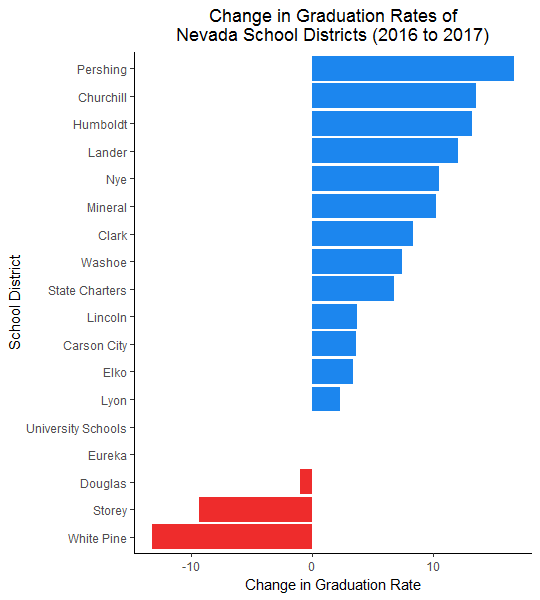 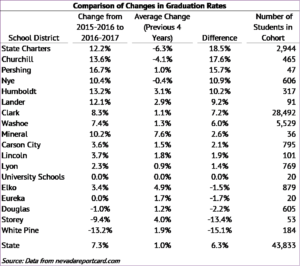 The graduation rate increases are magnified when analyzing subgroups within the State. The table below suggests ethnic subgroups, specifically African American and Latino students, benefitted from the elimination of the HSPE. These groups experienced graduation rate increases of 11.2 percent and 10.0 percent, respectively. The increases are even greater for students who qualified for Free and Reduced Lunch (FRL), had an Individualized Education Plan (IEP), or received English Language Learner (ELL) services (due to the nature of these designations, and the ability of students to enter and exit the programs at random times throughout their schooling, these groups include students who were ever included in these subpopulations; it is not limited only to students who were receiving services at the time of graduation). These increases were 10.1 percent, 35.4 percent, and 39.1 percent, respectively. Ultimately, it appears the HSPE in Nevada suppressed the graduation rates of minority students, and especially special education students and non-native English Speakers. 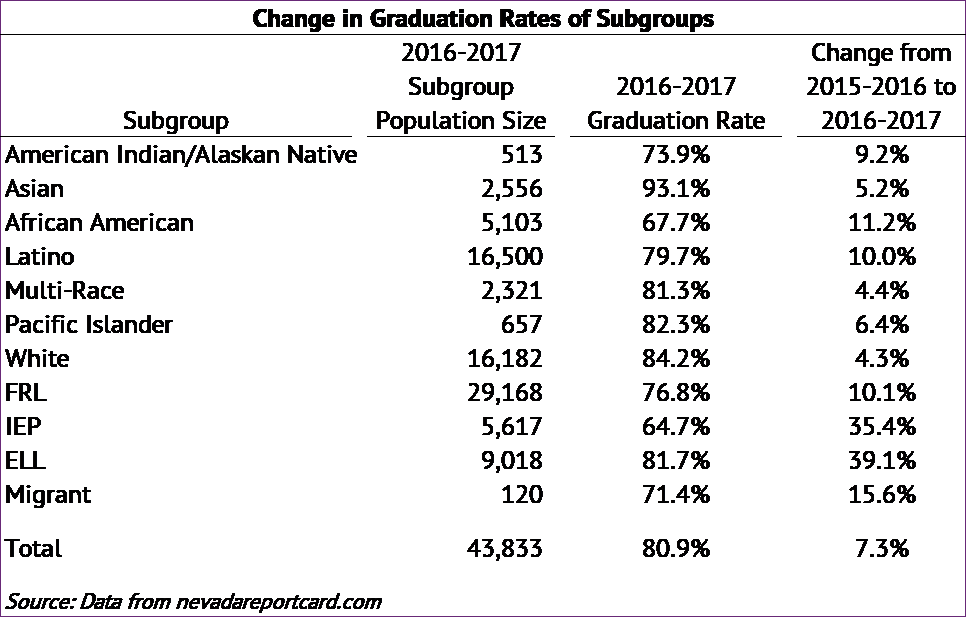 From these figures and charts, it is clear the graduation rates of Nevada’s school districts are higher than they have been historically. Additionally, the increase in year-over-year graduation rates from the 2015-2016 to 2016-2017 school years outpaced the average increase in over two-thirds of Nevada’s school districts. When considered together, these two factors suggest the graduation rate increase can partially be explained by a general upward trend in graduation rates, but also benefited from a statewide phenomenon: the elimination of the HSPE. Additionally, this change had the greatest positive impact for minority, special education, and English Language Learner students.

As previously noted, graduation rates are impacted by a number of factors, so attempting to predict future fluctuations can be difficult. It is likely that increased data availability and student tracking mechanisms will continue to push graduation rates higher. This is especially true for the 2017-2018 school year, where the end-of-course examination continues to be a participation-only test for the seniors. Additionally, increased usage of alternative means of instruction (as suggested in the introduction) might increase graduation rates further. However, if the explanation proposed here is true, the weight attributed to the end-of-course exams may act as a force pulling graduation rates down in the future. Currently, it is impossible to know just what effect these assessments will have on the graduation rate, as data is unavailable to analyze the difficulty of the exam, as well as the impact it will have on a student’s overall grade.

It is important to note that graduation rate increases from any cause are to be celebrated. This post is not arguing that the latest increase cannot be attributed to improved efforts on the part of the Nevada Department of Education or individual schools/districts. It is quite the opposite, as there are a number of great initiatives underway currently in Nevada’s public schools.  Additionally, the data suggests that the elimination of the HSPE removed a significant barrier to graduation for Nevada’s special education and English Language Learner students, which could help expand college and career pathways for these students.