Forecasting revenue is the first step to crafting a new state budget. Nevada recently earned praise for its revenue forecasting practices in a new report by the Center for Budget and Policy Priorities (CBPP). This report argues that transparent and inclusive revenue forecasting processes can lead to a more democratic debate and greater fiscal discipline. 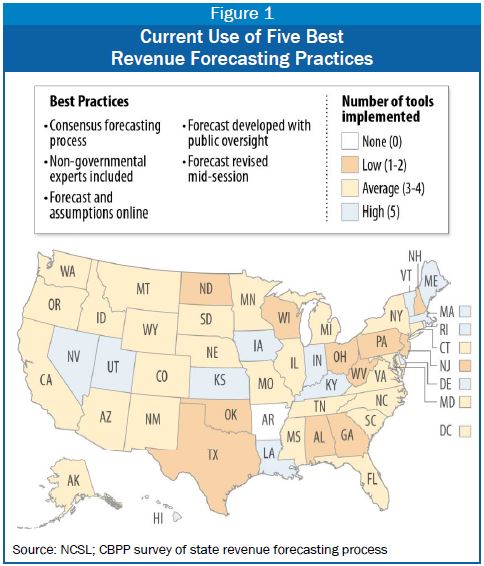 More detail on each of the best practices and how they are implemented in Nevada is provided below.

Nevada’s revenue forecasting process is well established, and is trusted and respected across different levels of state government. CBPP argues that implementing all 5 best practices leads to a healthier, more democratic debate, boosts the public trust, and may produce better results.

In a related CBPP report released in February 2014, Nevada ranked sixth in the nation for its use of budget planning tools. The Silver State was commended for its use of the Economic Forum as well as the nonpartisan Legislative Fiscal Bureau, which provides fiscal analysis to both the Senate and Assembly. Nevada also implements several other best practices such as requiring fiscal notes to estimate the cost of each bill with a fiscal impact, requiring a rainy day fund to weather tough economic times, and placing limitations on issuance of debt.

While Nevada has many effective budgeting tools in place, the Guinn Center for Policy Priorities commented in the Las Vegas Sun that CBPP has identified several areas for improvement. Nevada’s budget does not currently include multiyear forecasts of revenue and spending. Nevada also lacks independent review of pension assumptions methods and investments. Implementing these tools will help Nevada take a long-term view of its future workforce, population, and infrastructure needs. It will also make the Silver State more attractive to businesses by providing more certainty about taxes they will owe and services they will receive.