The federal government is planning to look into state laws that allow for marijuana use for non-medial purposes, White House Press Secretary Sean Spicer said in a press conference last week. Meanwhile, Nevada is moving ahead with its rollout of its legalized marijuana program, with sales set to begin on July 1, 2017.

Marijuana was legalized in Nevada in November 2016, following the passage of a ballot initiative. More than 54 percent of the State’s 1.1 million voters voted in favor of the measure, nearly ten percent higher, or roughly 100,000 votes more than the number opposed to it. (See the Guinn Center Fact Sheet on this ballot initiative that examined the initiative to tax and regulate marijuana in the Silver State).

Figure 1 shows the breakdown of the votes for and against the Question 2: Initiative to Tax and Regulate Marijuana. 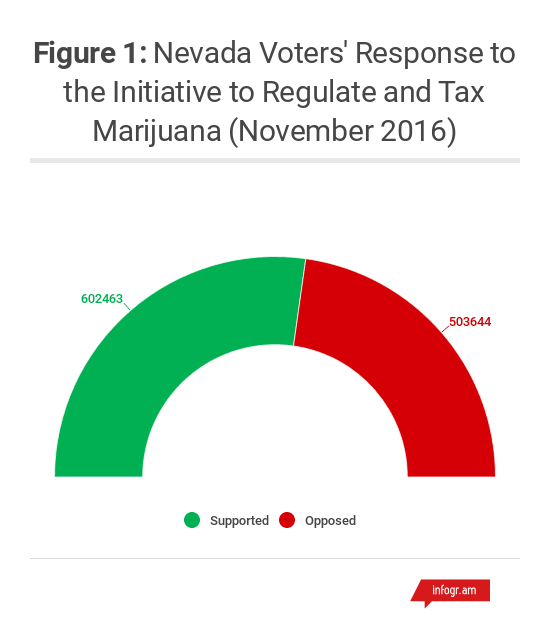 Tax revenue from marijuana wholesales and retail sales in Nevada will go toward K-12 education.

When the measure passed in November, Nevada, along with California, Connecticut, and Maine, became one of four new states that approved ballot initiatives legalizing marijuana for purposes other than medical.

Currently, more than half of all states in the U.S., as well as the District of Columbia (D.C.), currently have some laws allowing for marijuana use. Seven states and D.C. have legalized marijuana for recreational purposes, and 20 other states allow medical marijuana.

Figure 2 illustrates the marijuana laws across the country. 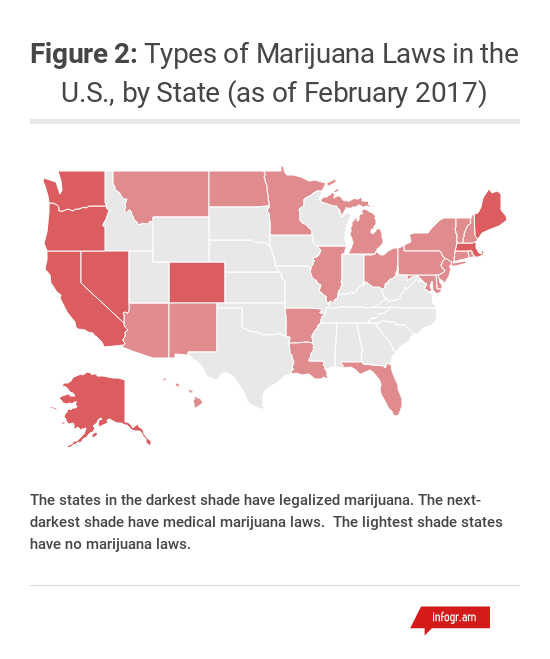 U.S. Attorney General Senator Jeff Sessions (R-AL) is an outspoken critic of marijuana laws. Many supporters of legalization, including marijuana business owners and medical marijuana patients, have expressed concerns about the potential crackdown on laws in states that currently run legalized marijuana programs.

Current Position of the U.S. Department of Justice on Marijuana

Although the federal government lists marijuana as a Schedule I substance—along with heroin, ecstasy, Quaalude, and peyote—on the Controlled Substances Act, the U.S. Department of Justice and other federal government agencies have taken hands-off approach to addressing the increasing number of states with marijuana laws in recent years. Instead, federal agencies have issued a series of memos to guide federal prosecutors in the states.

These memos can be summarized as follows:

As more and more states began implementing medical marijuana laws, the U.S. Department of Justice responded in 2009 with a memo from Deputy Attorney General David W. Ogden to all U.S. attorneys. He wrote, “The Department of Justice is committed to the enforcement of the Controlled Substances Act in all States. Congress has determined that marijuana is a dangerous drug, and the illegal distribution and sale of marijuana is a serious crime and provides a significant source of revenue to large-scale criminal enterprises, gangs, and cartels…The Department is also committed to making efficient and rational use of its limited investigative and prosecutorial resources.”

In short, Ogden advised that prosecutors should direct their efforts toward large-scale criminal drug operations rather than on individuals whose actions were in compliance with state laws. As Ogden explained, “Prosecution of individuals with cancer or other serious illnesses who use marijuana as part of a recommended treatment regimen consistent with applicable state law, or those caregivers in clear and unambiguous compliance with existing state law who provide such individuals with marijuana, is unlikely to be an efficient use of limited federal resources.”

The Department of Justice memo went on to list several indicators of “illegal drug trafficking activity of potential federal interest,” which are as follows:

Legal scholars have described the Ogden memo as “hands-off” policy for the federal government’s involvement in the laws of states with medical marijuana programs. As a result of this memo, states that allowed medical marijuana saw significant increases in the number of related business license applications. Colorado’s program, for example, grew from a few dozen dispensaries to nearly 1,000 by the end of 2009.

Two years later, in 2011, as the medical marijuana programs continued to grow across the country, the U.S. Department of Justice issued a second memo responding to the booming industry, especially the large-scale, privately owned industrial cultivation facilities that were opening in some states. Deputy Attorney General James M. Cole wrote in a memo: “State laws or local ordinances are not a defense to civil or criminal enforcement of federal law with respect to such conduct, including enforcement of the CSA.”

Cole urged U.S. attorneys to use their discretion and consider their resources when choosing whether to pursue action against individuals or businesses engaging in marijuana. Some did choose to move forward with legal action. As the authors of “Cooperative Federalism and Marijuana Regulation,” an article in the UCLA Law Review observed, “The four U.S. Attorneys in California combined forces in a concerted action against California’s medical marijuana industry Montana’s industry was essentially shut down by law enforcement actions; and Colorado dispensaries within a thousand feet of a school were told they must either relocate or close their doors.”

Furthermore, the memo also reiterated that marijuana businesses are barred from using the U.S. banking system. Cole wrote, “Those who engage in transactions involving the proceeds of [marijuana] activity may also be in violation of federal money laundering statutes and other federal financial laws.”

Until early 2016, under the Federal Deposit Insurance Corporation (FDA) regulations and the Credit Support Annex (CSA), any bank found to be involved in a marijuana business transaction is subject to asset seizure. Major credit card companies are barred from giving accounts to marijuana businesses under the current federal laws.

Following the passage of the Colorado Amendment 64 and Washington Initiative 502, which legalized recreational marijuana in both those states, the U.S. Department of Justice once again released a memo reaffirming the federal government’s position on marijuana and offering guidelines for the U.S. attorneys dealing with marijuana in their jurisdictions. In what is commonly known as the Cole Memo II, Deputy Attorney General Cole elaborated on the key enforcement priorities originally outlined the Ogden memo. He said the U.S. government’s interests in pursuing marijuana-related cases are as follows:

Historically, the federal government has not involved itself in lower level drug crime or possession, leaving the enforcement and prosecution up to state and local law enforcement. Cole said that this position will not change, provided “states and local governments that have enacted laws authorizing marijuana-related conduct will implement strong and effective regulatory and enforcement systems that will address the threat those state laws could pose to public safety, public health and other law enforcement interests.”

Prosecutors were still expected to review each marijuana case on a case-by-case basis to determine whether the operation is “demonstrably in compliance with a strong and effective state regulatory system” and whether its fiscal operation are in compliance with federal regulations. Cole said that the primary question in pursuing a case against an individual or marijuana business’s actions undermine the federal priorities.

The reactions to this memo in light of the new state recreational marijuana laws were mixed. Opposition to recreational laws came out against the memo’s provisions. One pro-legalization group, Smart Approaches to Marijuana, called it “disappointing” but hoped it would “quicken the realization among people that more marijuana is never good for any community.” On the other hand, a number of pro-legalization organizations, including Law Enforcement Against Prohibition, New Approach Oregon, the Drug Policy Alliance, the Marijuana Majority and the Criminal Law Reform Project, all issued statements supporting the new Cole memo. As Ethan Nadelman, executive director of the Drug Policy Alliance said, “I was expecting a yellow light from the White House. But this light looks a lot more greenish than I had hoped. The White House is basically saying to Washington and Colorado: Proceed with caution.”

Following the “trust but verify” position the Justice Department took in the second memo, Deputy Attorney General Cole followed up with two additional memos that provided clarification on the Justice Department’s position on state marijuana laws. The first memo, published in February 2014, says that financial institutions are allowed to begin accepting business from marijuana companies but are expected to closely monitor the actions of the companies for any illegal activity. As Cole explained, “The provisions of the money laundering statutes, the unlicensed money remitter statute, and the Bank Secrecy Act (BSA) remain in effect with respect to marijuana-related conduct. Financial transactions involving proceeds generated by marijuana-related conduct can form the basis for prosecution under the money laundering statutes, the unlicensed money transmitter statute and the BSA.”

Similar to the earlier Deputy Attorney General memos, this one also listed the eight priorities for U.S. attorneys. Cole advised federal prosecutors to pursue financial cases that violate those priorities. As an example of one type of case a Justice Department Attorney may encounter, he wrote, “For example, if a financial institution or individual provides banking services to a marijuana-related business knowing that the business is diverting marijuana from a state where marijuana sales are regulated to ones where such sales are illegal under state law, or is being used by a criminal organization to conduct financial transactions for its criminal goals, such as the concealment of funds derived from other illegal activity or the use of marijuana proceeds to support other illegal activity, prosecution for violations of [federal statutes] or the BSA might be appropriate.”

The final memo on this issue from Deputy Cole was published on October 14, 2014 and seeks to provide insight into how the Justice Department would respond to marijuana activity on Native American sovereign land. (Nevada, for instance, has 32 colonies and reservations.) In keeping with the spirit the previous memos, Cole urged U.S. attorneys to evaluate each instance of a marijuana business violating the eight federal priorities on a case-by-case basis. In the event the activity takes place in Indian Country, the U.S. attorney should consult with tribal government on a “government-to-government basis” and work collaboratively with the Executive Office for United States Attorneys, the Office of Tribal Justice, and the Office of the Deputy Attorney General.

Any significant change in federal posture could impact state and local economies, which have collected significant tax revenues.

Any information, factual findings, policy recommendations, legal interpretations, or legal analysis contained in the Guinn Center policy reports and materials is not meant to nor does it convey legal advice to any person or entity reading, reviewing, or accessing the material. Any party seeking legal advice or legal guidance should seek advice from legal representatives.