As the driest state in the nation, Nevada has always faced challenges when managing its scarce water resources. But this fact is especially true in the desert landscape of Southern Nevada, where the average precipitation rate is just four inches per year. Further complicating matters, southern Nevada relies on a single source, Lake Mead, for nearly 90 percent of all of its water resource needs. The reservoir, which is provisioned by the 1,450-mile-long Colorado River, serves nearly 2.2 million people throughout Clark County in Southern Nevada, which contains over 70 percent of the overall state population. For these reasons and more, effective water resource management with respect to Lake Mead requires a careful consideration of evolving supply and demand trends in the region. Here, these developments and related challenged will be assessed.

Background: “The Law of the River”

The enormity and reach of the Colorado River Basin is significant, as shown in Figure 1. Water from the Colorado River is shared by Mexico and seven U.S. states: Arizona, California, Colorado, Nevada, New Mexico, Utah and Wyoming. In 1922, U.S. Secretary of the Interior Herbert Hoover and representatives from each of the seven basin states negotiated and established the Colorado River Compact. The agreement formed the basis for “the law of the river,” which is the collection of compacts, federal laws, court decisions and decrees, contracts, and regulatory guidelines that govern Colorado River water resource management.

The Colorado River Compact divided the states into two distinct hydrographical regions: the “upper division” states (Colorado, New Mexico, Utah, and Wyoming) and the “lower division” states (Arizona, California, and Nevada). Per the agreement, each of these regions would be granted 7.5 million acre feet of water per year. Of the 7.5 million acre-feet apportioned to the lower division states, 4.4 million was allocated to California, 2.8 million to Arizona, and 0.3 million to Nevada. In 1944, the United States negotiated the Mexican Water Treaty, which guaranteed Mexico an additional allotment of 1.5 million acre-feet per year from the Colorado River Basin. 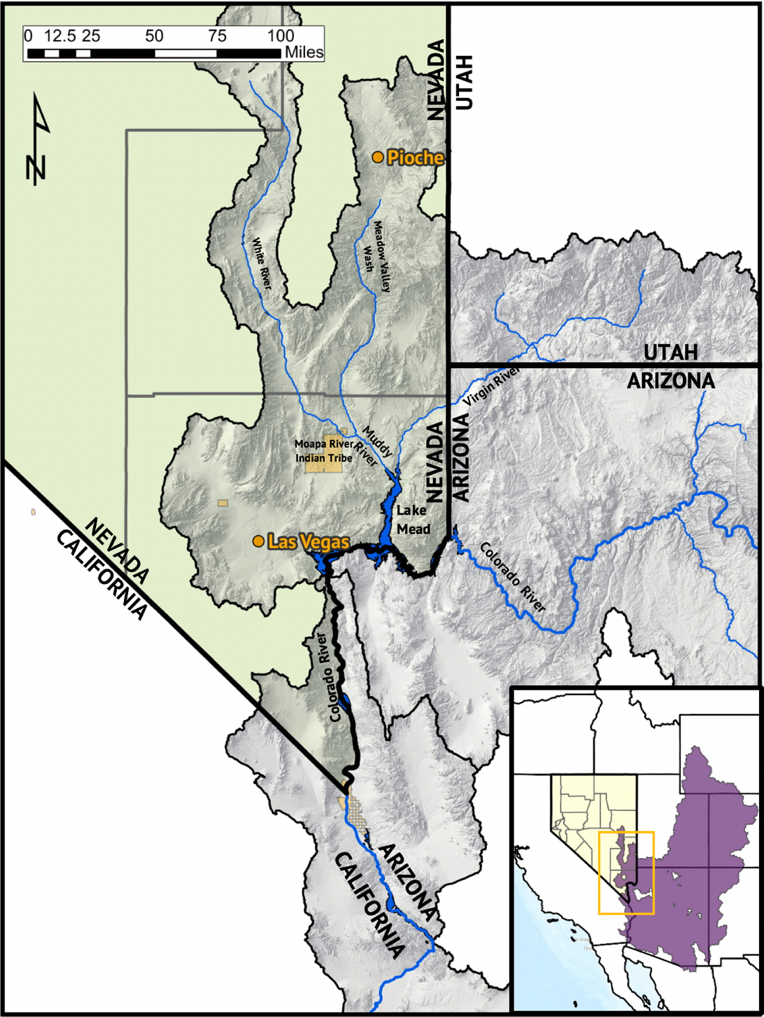 When the compact was originally developed in 1922, Nevada had a population of less than 100,000 individuals, making the apportionment of 0.3 million-acre feet per year more than sufficient, if not abundant. Today, after decades of extensive population growth, the state is home to nearly 3 million individuals, which represents an approximate 1000 percent increase since the compact was established. Table 1 presents population data and the distribution of water among lower division states. As population grows in the state, so too does demand for water resources. Given that Nevada’s Colorado River apportionment has remained constant over time, the need for conservation and sustainable water policy measures have become more salient.

Lake Mead elevations are currently at risk of falling to unprecedentedly low levels. The primary reasons for this are twofold. First, ongoing drought conditions have reduced water supply across the entire Colorado River basin, and thus, Lake Mead has not been adequately replenished. Second, population has grown (and continues to grow) in Nevada, particularly in the south, which has increased demand for water resources.

Declining snowfall, rainfall and runoff – all of which feed water systems in both northern and southern Nevada – have led to notable reductions in some of the state’s most important water resources. As noted above, Lake Mead elevations have fallen dramatically due to the ongoing Colorado River drought, which originated in 2000 and continues today. A depleting Lake Mead reservoir compelled the Southern Nevada Water Authority (SNWA) to begin construction on a new low-lake pumping station that is capable of extracting water from elevations as low as 895 feet, as current pumping stations can only extract water from 1,000 feet. While Lake Mead is not expected to drop below that level any time soon, the persistent drought conditions have raised enough concern to elicit action.

In response to the ongoing drought conditions and declining elevations, the U.S. Department of the Interior signed a Record of Decision in 2007 to create “the Interim Guidelines.” The decision established, for the first time in the region’s history, federal water shortage guidelines for the Lake Mead reservoir. Shortages are “triggered,” or designated, when certain elevation thresholds are met at Lake Mead. These designations are summarized in Table 2 below.

If Lake Mead elevations are recorded below 1,075 feet on January 1 in a given year, Nevada’s apportionment from the Colorado River will decrease by 13,000 acre-feet per year. On January 1, 2018, elevations were recorded at 1082.57 feet, less than 8 feet above the level that would trigger the first federally mandated water-shortage contingency plan in the region’s history. The U.S. Bureau of Reclamation (USBR) estimates that there is a 52 percent probability that the water levels at Lake Mead will reach the shortage threshold by the year 2020.

Additionally, the state’s population continues to grow across southern Nevada, which has increased the demand for water resources. Over recent decades, the population has soared in Nevada; from 1995 to 2015, the state population increased from approximately 1.5 million to nearly 2.9 million. Economic projections suggest that this growth will only continue to rise in coming years. The Center for Business and Economic Research (CBER) estimates that the population in Clark County alone could reach 2.72 million by the year 2035, an increase of nearly 0.5 million individuals. With a rapidly growing population, demand for water is surely to increase as well.

Despite the rapid increases in population, however, water consumption per-capita has declined significantly. Consider Table 3 below, which displays both populations estimates and per-capita public supply water use in the state. From 1995 to 2015, the population in Nevada grew by nearly 90 percent, almost doubling in size, while water-use per person decreased from 325 gallons-per-day (gal/d) to 197 gallons gal/d.

Policies introduced by the SNWA played a significant role in reducing per-capita consumption in southern Nevada. In 1999, the SNWA introduced the Water Smart Landscape Rebate program, which provided cash rebates to homeowners who replace their grass lawn with efficient, low-volume irrigation landscaping. Since its inception, the program has encouraged the removal of nearly 185 million square feet of water-intensive landscaping. The SNWA also introduced the Water Efficiency Technology (WET) program to encourage the use of smart water technologies in homes and businesses. A 2016 EPA report found that this program has saved approximately 900 million gallons of water per year in southern Nevada.

Still, Nevada water demand is only expected to rise in coming years, and water supply has remained stagnant. As we look forward to the future, additional innovations in water resource management in the state will likely be necessary.