Nevada’s Governor and Legislature have placed a high priority on diversifying Nevada’s economy with high technology industries to help grow the economy and minimize the impact of future recessions. This week, Ashima, a manufacturer of unmanned aerial vehicles, announced that it is planning to move its headquarters from California to Reno, Nevada. The company aims to have 400 workers by 2018. The jobs will be in the areas of research, testing, and manufacturing. In addition, Tesla, an electric car manufacturer, has been exploring building a battery gigafactory in northern Nevada, which could result in 6,500 new jobs that would require highly technical skills.

A recent nationwide survey shows that graduates with degrees in Science, Technology, Engineering, and Math (STEM) fields are least likely to be underemployed. But are Nevada’s colleges producing sufficient graduates in high technology fields to be able to meet the workforce needs of companies such as Ashima and Tesla? And what does the current job market in Nevada look like for STEM graduates? Are there enough jobs to keep these graduates in Nevada?

Graduates with STEM degrees are least likely to be underemployed

This week, the Washington Post reported on a survey by PayScale that reveals which college majors are most or least likely to lead to underemployment. According to PayScale, workers are underemployed when they feel they are underpaid, are not using their education or training, or work part-time but want full time work.  The undergraduate majors LEAST likely to lead to underemployment were all in Science, Technology, Engineering, and Math (STEM) fields. For most of these fields, jobs usually require only a Bachelor’s degree and less than five years of experience. However, some fields such as physics require a more advanced degree. 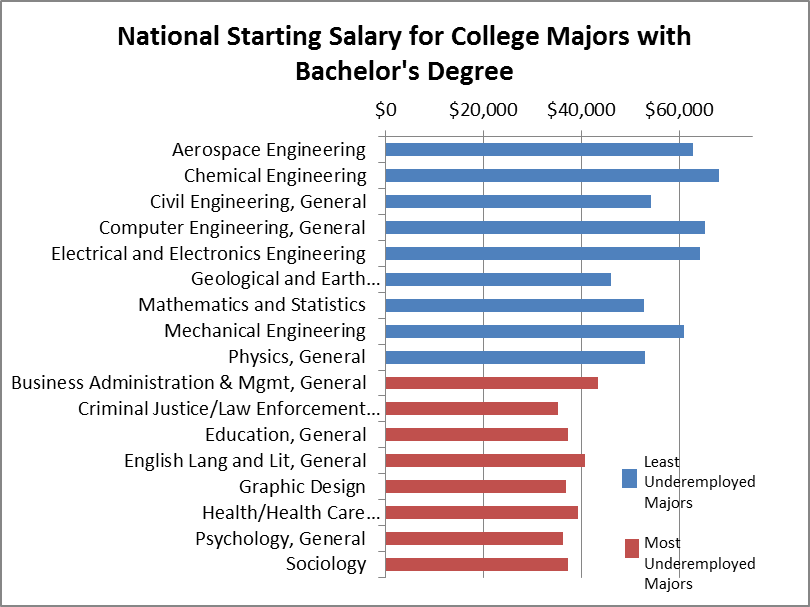 Source: PayScale: The College Majors Most and Least Likely to Lead to Underemployment and Majors that Pay You Back

For each of the majors identified as least likely to lead to underemployment, Figure 2 shows the number of Nevada students who received Bachelor’s degrees in 2012 compared to the number of annual job openings available to people with a Bachelor’s degree and less than five years of experience as estimated by the Nevada Department of Employment, Training, and Rehabilitation (DETR). This data reveals that the number of graduates typically exceeds the number of job openings. This phenomenon is most pronounced in the field of mechanical engineering, where there were 115 graduates but only 26 annual openings. In contrast, there are 26 annual openings in geology but no graduates. The only field where supply and demand are nearly equal is civil engineering. 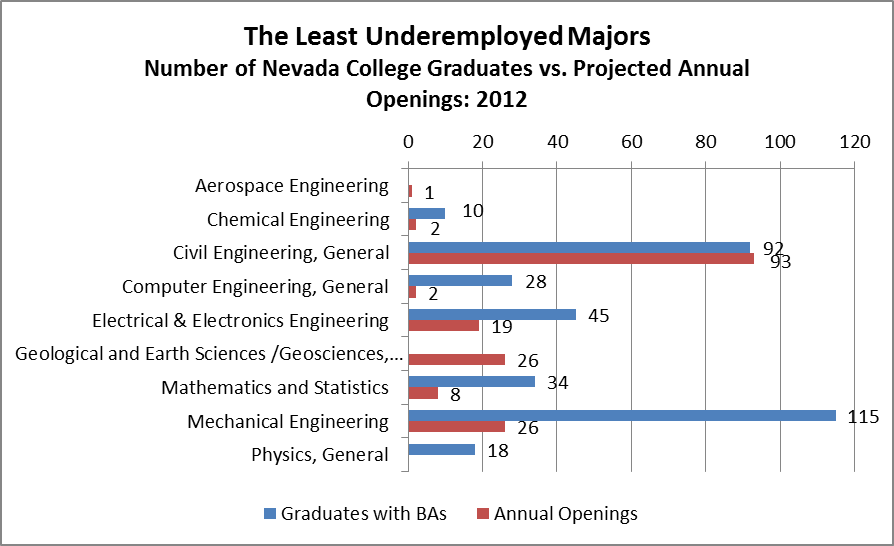 Building the STEM workforce is key to Nevada’s economic future

As an increasing number of high tech companies such as Ashima decide to locate in Nevada, there may be more opportunities for Nevada’s STEM graduates to stay in the state. However, given the small number of students currently graduating with STEM degrees from Nevada colleges, high tech companies moving here may quickly face a shortage of high skilled workers. As the state diversifies its economy, policymakers should consider how to increase the number of STEM graduates from Nevada’s colleges and keep them in Nevada. The Guinn Center is currently working on issues related to STEM education and economic development and will be releasing several policy papers on these issues this fall.