Recent reporting by the Guinn Center has highlighted studies on the effects of the criminal justice system on families and women in Nevada. This blog explores a new report from the Juvenile Law Center, “Debtor’s Prison for Kids? The High Cost of Fines and Fees in the Juvenile Justice System,” an analysis of the juvenile justice system in the U.S., which has one million new youth entrants every year.

The report is based on a comprehensive examination of juvenile justice statues across the U.S.; a nationwide survey and extensive interviews with professionals and families involved with the system and a criminology study on the costs, recidivism rates, and racial disparities in the juvenile justice system.

The researchers found that every single state imposes costs, fees, fines, and restitution on children in the state’s respective juvenile system. Such fines are damaging to both the children and their families in a variety of ways. As The New York Times article on the report explained, “In the juvenile systems intended to help wayward youths go straight, the study found these costs are often counterproductive, drawing young people, especially poor minorities, even deeper into the maze of criminal courts and straining already-fragile families.” The study found that children of color in particular are more likely to owe money to the courts.

The inability to pay these fines can have serious consequences for the juvenile offenders. Respondents to the Juvenile Law Center’s survey said an inability to often led to any or all of the following nine consequences: the case remained open longer; the youth was sent to juvenile justice placement; the youth remained in such placement long than had the child or family been able to pay; additional court visits, leading to missed school or work; the inability to get records expunged; a civil judgment imposed; and/or a formal petition filed for failure to pay diversion costs.

Of these consequences, the researchers caution that continued or unnecessary incarceration of a juvenile offender in a justice placement comes with an increased risk of lasting harm because such facilities often have high rates of physical and sexual violence and traumatizing practices, such as solitary confinement, physical restraints and strip searches.

Some counties in the U.S. have estimated court fees as high as $2,000 per case, which the study notes is equal to two months’ salary for a single parent who makes the federal minimum wage of $7.25. (In Nevada, the minimum wage is $8.25 per hour.) To meet these financial penalties, many families reported taking on debt, or forgoing basic needs like groceries or rent to repay the fees.

In addition, the study highlights some of the specific challenges facing children who are given fines for their involvement in the juvenile justice system. These fines place financial stress on the children and their families “because [the children] are too young to work, must attend school or can’t find employment even if they are eligible; and the exacerbation of racial and economic disparities in the juvenile justice system from such financial obligations.” The report adds that young people in lower socioeconomic strata are often less likely to find work and that young people with long work hours are more likely to have lower grades or drop out of school.

At the end of the report, the researchers summarize their findings on the fines associated with the juvenile justice system: “When a failure to pay fines is punished with incarceration, it needlessly pushes youth deeper into the juvenile justice system. When failure to pay results in driver’s license revocation or further fines, it pushes youth and families deeper into poverty. When it precludes young people from expunging their records, it poses an obstacle to education, employment and self-sufficiency.”

The Juvenile Justice System in Nevada

Nevada currently imposes six of the eight types of fines described in the Juvenile Law Center’s report. Of these, three are mandatory, which means the youth and the family are charged with the fine regardless of their ability to pay. The other three fines are imposed through judicial determination, which means that a judge looks at a variety of factors in determining whether to charge the fee.

The three types of mandatory fees in Nevada are:

Failure to make such payments can result in the withholding of treatment or interruptions in medications that the child needs. It can also cause the child to remain in a facility longer than necessary. Fifty percent of respondents to the Juvenile Law Center’s survey said that cost of care fees had created financial burdens for the child and his or her family.

While restitution is designed to make the victim whole, it can create more problems for the juvenile offender and the family, 76 percent of whom reported being unable to pay these fees. The inability to pay restitution can increase debt, cause more court appearances, and lead to the revocation of the child’s driver’s license.

The other three fees in Nevada are imposed through judicial determination, which means that a judge looks at a variety of factors in determining whether to charge the fee.

The Juvenile Law Center reported that 65 percent of respondents to their survey said they had difficulty paying these fees. The failure to pay even small court fees can have major legal consequences for the juvenile and the family. In some cases, the offender is denied access to needed programs and treatments because of the failure to pay.

Although research has shown that placement in a non-incarceration programs has better outcomes and reduced recidivism for young people, the inability to pay the costs that cover such programs can cause the child to enter the traditional juvenile justice system. Sixty percent of survey respondents said that diversion costs created monetary hardships for the child and family.

Although evaluation costs are not punitive, the inability to repay can cause the child to remain in placement unnecessarily. The court may even revoke the juvenile’s probation if these fees remain unpaid. Sixty percent of survey respondents said such fees created problems for the child and the family.

Of the nine different consequences that stem from an inability to pay the juvenile justice fees, children and families in Nevada can experience up to five, according to the report’s survey. They are: family debt, additional court visits resulting in missed school or work, prevented expungement, civil judgment and other.

In addition to the consequences discussed in the Juvenile Law Center report, a second report on the juvenile justice system in Nevada from the Juvenile Collateral Consequences Project from the American Bar Association lists a number of additional consequences interactions with juvenile courts can have on young people and their families, including:

Comparison with the Intermountain West

Nevada is one of nine states in the U.S. that imposes six of the eight different types of fees on juveniles and their families. Although no state charges offenders with all eight fees, six states—Arkansas, Kansas, Michigan, Montana, Oregon and Texas–do charge seven fees. One state, New York, has only one fee, restitution, but it is made by judicial determination.

In the Intermountain West, Arizona also imposes six fines on its juveniles in the justice system: care, diversion, expungement, fines, probation and restitution. The Juvenile Law Center defines expungement as “fees to file petitions seeking to seal or expunge juvenile records.” Fees for probation cover the cost of supervision while the juvenile is on probation.

Table 1 shows the types of fees Nevada and the other states in the Intermountain West charge juveniles in the justice system and whether the fees are mandatory or judicial determination. 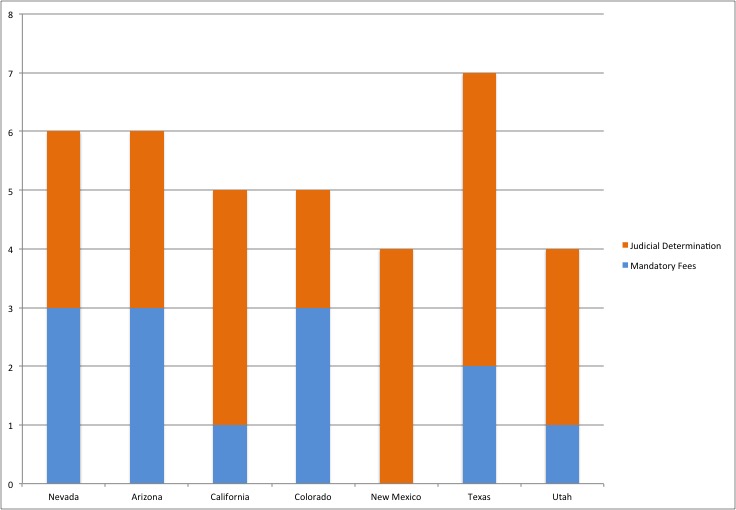 The nine consequences of an inability to pay these fees can reportedly happen in three states in the Intermountain West: Colorado and Texas. In California, children and families reported experiencing eight, and in Utah, children and families reported experiencing six. (New Mexico and Arizona were not included in the survey results.)

Recommendations from the Juvenile Law Center

The Juvenile Law Center makes a number of recommendations in its report on how to improve the outcomes of the juvenile justice system. First and most importantly, it emphasizes that children should not be punished or denied access to needed resources for the inability to pay these fines. States should eliminate these fines, or at the very least take into consideration the family’s ability to repay before imposing these costs.

The report also cites a number of counties in California that have placed a moratorium on fees in the juvenile court system. Washington State passed the Youth Equality and Reintegration (YEAR) Act, which eliminates a number of fees and requires the courts to consider a juvenile offender’s ability to repay before imposing any fines.

Fortunately, Nevada, a state with both a high minority youth population and a high rate of poverty, has already begun taking steps to improve the juvenile justice system.

Most recently, the Legislative Committee on Child Welfare and Juvenile Justice unanimously approved $3.6 million in funding for programs to help at-risk youth in August. The programs are meant to provide front-end services to young people, which would not only prevent them from becoming entrapped in the juvenile justice system but would also save the State money in the long-term by reducing recidivism and incarceration costs. Of this new funding, $2 million will go toward a Clark County center that will help runaways, homeless, sexually exploited, and low-level juvenile delinquents. An additional $400,000 will be used specifically to provide programming for girls and young women.

Earlier this summer, Governor Brian Sandoval announced that Nevada was the only state to be awarded funding from the U.S. Office of Juvenile Justice and Delinquency Prevention to analyze the juvenile justice system. The purpose of the study is to determine whether funding allocated for juvenile justice in the State is being used to give the best outcomes for young people.