Since the Great Recession, the Silver State has been undergoing a great economic transformation to make Nevada’s economy more resilient. Indeed, Nevada’s business-friendly tax structure and economic growth have attracted many global businesses, such as Tesla, Switch, Google, and Amazon, which are helping diversify our economy. However, this transformation toward a 21st-century economy has been stifled by challenges associated with gaps in workforce readiness and low educational attainment levels in Nevada. To address the need for a more educated workforce, the Silver State  has launched a number of initiatives to address these challenges, including the creation of the Silver State Opportunity Grant in 2015 to help make college more affordable. Five years after the creation of the program, the question remains: is the Silver State Opportunity Grant improving degree attainment among Nevada’s high school graduates? This blog summarizes the Silver State Opportunity Grant, describes how such a program could help boost educational attainment in Nevada, and presents data on persistence rates since the SSOG was implemented.

What is the Silver State Opportunity Grant?

The Silver State Opportunity Grant (SSOG) is a statewide, need-based, financial aid program created by the Nevada State Legislature in 2015 to increase educational attainment among low-income Nevadans. Students are eligible for SSOG if they are Nevada residents who have completed the Free Application for Federal Student Aid (FAFSA) and are enrolled in at least 12 credits* per semester at one of Nevada’s four community colleges or Nevada State College. The colleges award the grant funds on a first-come, first-served basis. Award amounts are determined by the average cost of attendance at these institutions and each applicant’s Expected Family Contribution (EFC), as calculated by the FAFSA.

To be considered for the SSOG, students only need to complete a FAFSA; no secondary application is required (Visit the Nevada System of Higher Education website for more information about the specific eligibility criteria.) *Reduced from 15 credits by Nevada State Legislature in 2019. Students must be enrolled in at least 30 credits in the academic year. Students enrolled in 15 credits are prioritized in the awarding process.

Since the Great Recession, both the cost of living and income inequality have risen in Nevada, pushing more Nevadans below the poverty line. Additionally, the value of federal need-based aid, such as the Pell Grant, has not kept up with rising tuition costs, leading to lower persistence and degree attainment rates among low-income students. As families are faced with lower purchasing power and rising college tuition, higher education moves further out of reach for many of Nevada’s students. In 2019, the National Center for Education Statistics (NCES) reported that the lower a student’s family income level, the less likely they are to pursue higher education within three years of graduating from high school. These students are also more likely to be unemployed. The following graph illustrates that students from families with lower levels of income tend to have lower rates of post secondary enrollment and lower rates of employment.

Predictably, as income equality and purchasing power for Nevada’s families has fallen, persistence and degree attainment rates among Nevadans have, too. The rising cost of higher education and declining economic power present significant challenges to the vitality of Nevada’s workforce. However, a state-supported, need-based grant could be the ladder Nevada needs to climb back to prosperity. By providing additional support to low-income students, the SSOG may help make college degrees and technical certificates affordable for more of Nevada’s students and boost the education and qualifications of Nevada’s workforce.

How is the Silver State Opportunity Grant increasing educational attainment in Nevada?

Since its creation in 2015, the SSOG has been awarded to five cohorts of students attending Nevada’s four community colleges and state college. In its first four years, the program issued 5,351 grants totaling over $13.6 million (based on preliminary reports for 2018-2019 award year; additional funds may have been disbursed for Spring 2019.) The following graph shows the distribution of SSOG funds across the five institutions in the first four years of the program. 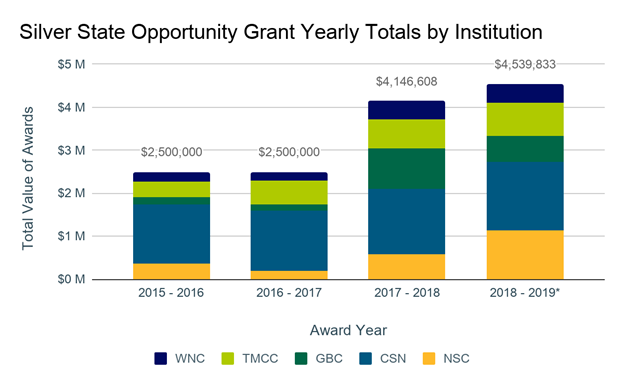 In order to assess how well the SSOG is helping increase educational attainment among low income Nevadans, we examine the income level and persistence rates of grant recipients.

Although the Silver State Opportunity Grant is primarily meant to assist low-income students, there is no income cutoff for eligibility. However, the structure of the grant process favors low income-students by prioritizing the allocation of funds to students with low EFCs. The lower a student’s EFC, the larger the grant he or she will receive. Eligible students with high EFCs may receive the SSOG if funds are available after funds are allocated to needier students, though their grants will be much smaller.

The most recent data available (award year 2017-2018) shows that a large majority of grant recipients had personal or family income levels below Nevada’s median household income*, as illustrated in the chart below. As the values of grants are determined by students’ EFCs, the distribution of SSOG funds is also heavily skewed toward households with incomes below the median. Overall 94 percent of SSOG funds were awarded to students with personal or family incomes below the median household income for Nevada.

Though expanding access to higher education is critical, it is not enough on its own. The likelihood that students will persist to graduation must also be improved. As a need-based grant, the SSOG aims to increase students’ persistence by making college more affordable. This follows a basic logic: students are more likely to persist if college is less expensive. Though the SSOG does not completely cover the cost of attendance, the grant funds may enable students to work less and take more credits. This thinking is in line with recent research by Civitas Learning, which shows that students’ likelihood to persist increases with the number of classes they take. 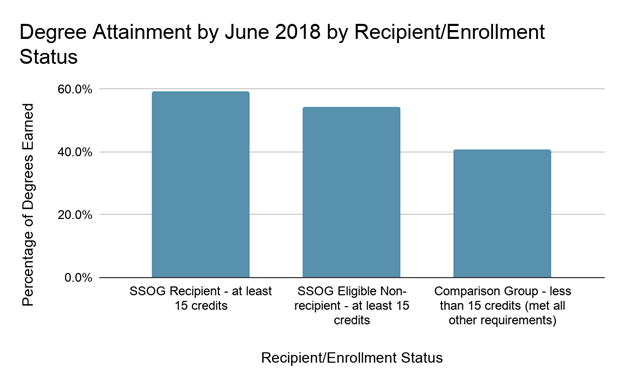 Persistence rates have increased since the SSOG was implemented. The need-based scholarship program identifies and prioritizes low-income students in the awarding process. Recipients are more likely to persist and earn degrees or certificates than their peers (e.g., comparison group). However, the data also suggests that the greater degree attainment rates of SSOG recipients are more likely reflective of the number of courses recipients are required to take rather than the financial assistance.

This blog was funded with the generous support of the NV Energy Foundation.