Nevada is the driest state in the country. The state’s desert climate and mountainous topography contribute to significant evaporation losses and an average precipitation rate of less than ten inches per year, the lowest annual rainfall in the United States. In Southern Nevada, where more than 70 percent of the state population lives, the average precipitation rate is less than just four inches per year. Complicating matters, issues like over-appropriation of water rights, persistent drought, and rapid population growth continue to strain the state’s already scarce resources. For these reasons, among others, the economic and environmental landscape of water in Nevada is unique.

But how do these characteristics influence the various applications of water use in Nevada? To answer this question, we turn to the data. Since 1950, the United States Geological Survey (USGS) has compiled water-use data by sector to provide context on current applications of water and to identify any evolving trends. It must be noted that the USGS data presented here reflects water withdrawals, water removed from a ground- or surface-water source for a specific application, not water consumed, in which the water ultimately becomes unavailable for reuse. The distinction is important because water withdrawals do not necessarily lead to a depletion in water resources. Nevertheless, data on withdrawals provide context to an important question: how does Nevada use its scarce water resources?

All residents, commercial entities, industries, and agricultural sites depend on water resources to some extent, but some sectors understandably withdraw far more water resources than others. The USGS identifies eight primary water-use sectors in its reporting: irrigation, public supply, mining, thermoelectric power, domestic, industrial, livestock, and aquaculture. Figure 1 below displays the percentage of each water-use category in proportion to Nevada’s total withdrawals using USGS data from 2015. 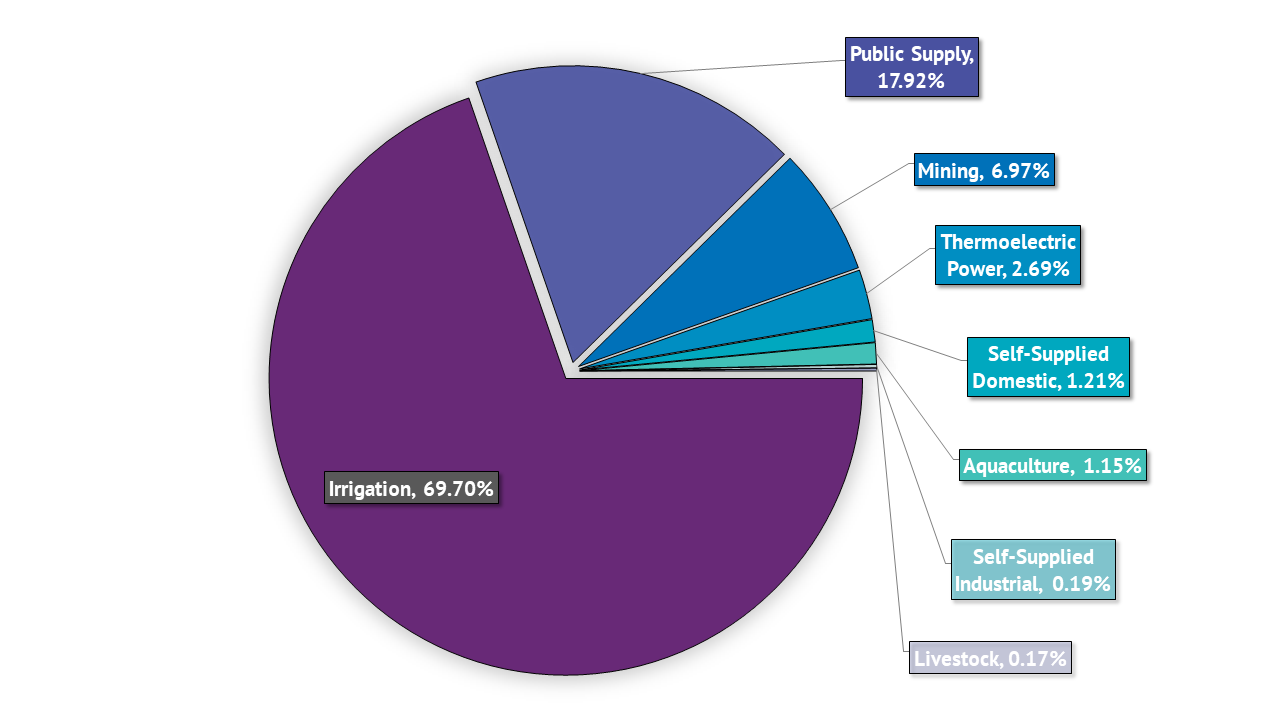 As Figure 1 illustrates, irrigation represents the largest share of water use in Nevada, accounting for nearly 70 percent of overall water withdrawals. When compared to the eastern United States, irrigation withdrawals are significant in Nevada (and the American West, in general) because the region is relatively more arid. Agricultural lands therefore require more ground- and surface-water resources to make up for the lack of precipitation. While the state’s irrigation withdrawals appear very large at first glance, it must be noted that the proportion in Nevada closely aligns with global statistics; approximately 70 percent of all the world’s fresh water supply is used for irrigation purposes.

Irrigation water is used for “…sustain[ing] plant growth in agricultural and horticultural practices[,] …pre-irrigation, frost protection, chemical application, weed control, field preparation, crop cooling, harvesting, dust suppression, and leaching salts from the root zone.” Despite the arid environment of the state, feed-crop agriculture remains an integral component of Nevada’s economy. For example, the most valuable crop in the state, hay, accounted for approximately $196 million in economic value in 2015 alone.

Public supply represents the second largest share, accounting for nearly 18 percent of total withdrawals. Public supply refers to “water withdrawn by public and private water suppliers that furnish water to at least 25 people or have a minimum of 15 connections.” Some of the more ubiquitous public suppliers in the state include the Las Vegas Valley Water District, which serves water to nearly 1.5 million residents in Clark County, and the Truckee Meadows Water Authority, which provides water to nearly 400,000 homes and business in Washoe County. Most Nevadans, nearly 93 percent of the state population, receive their water from a public supplier.

Nevada withdraws approximately seven percent of its total withdrawals for mining, the third largest water-use sector in the state. Mining water is used for extracting minerals, quarrying, milling materials, and extracting oil and natural gas (e.g. hydraulic fracturing). The relatively large proportion of water withdrawals for mining use reflects the prevalent mining industry in the state. In 2016, the mining industry contributed approximately $3.4 billion dollars in economic value. Nevada is primarily known for mining metals like gold, silver, and copper, but the state also extracts materials such as iron, lithium, and molybdenum.

Approximately 2.7 percent of Nevada’s water resources are withdrawn for the purpose of generating thermoelectric power. Thermoelectric power plants generate electricity by boiling water from fuel sources like coal or natural gas and then using the subsequent steam to spin turbine generators. Thermoelectric plants fueled by natural gas and coal generate over 80 percent of the electricity in Nevada, so a sizable amount of state water resources are needed to provision this water-use sector.

Each of the remaining four categories – self-supplied domestic, industrial, livestock, and aquaculture – only represent about one percent or less of total withdrawals. Self-supplied domestic water-use (1.2 percent) refers to water withdrawn by residences (not from a public supplier) for both indoor and outdoor purposes. In 2015, there were 49,928 domestic wells estimated in Nevada.

Aquaculture water-use (1.15 percent) refers to the cultivation and harvesting of water-based organisms “…for food, conservation or sport.” Industrial water-use (0.19 percent) is defined as “water used for industrial purposes in such industries as steel, chemical, paper, and petroleum refining.” Finally, livestock water use (0.17 percent) refers to water that is used for “…livestock watering, feedlots, dairy operations, and other on-farm needs.”

Water Use by County

Water use varies notably across counties in Nevada. Consider Figure 2 below, which displays total water withdrawals expressed in millions of gallons per day (Mgal/d) across all seventeen counties in Nevada. Figure 3 shows water withdrawals for the state’s top four water-use categories (i.e. irrigation, public supply, thermoelectric and mining). Note that maps for the remaining four water use categories (i.e. domestic, livestock, industrial and aquaculture) are not included, as these water-use sectors represent very small shares of overall withdrawals. 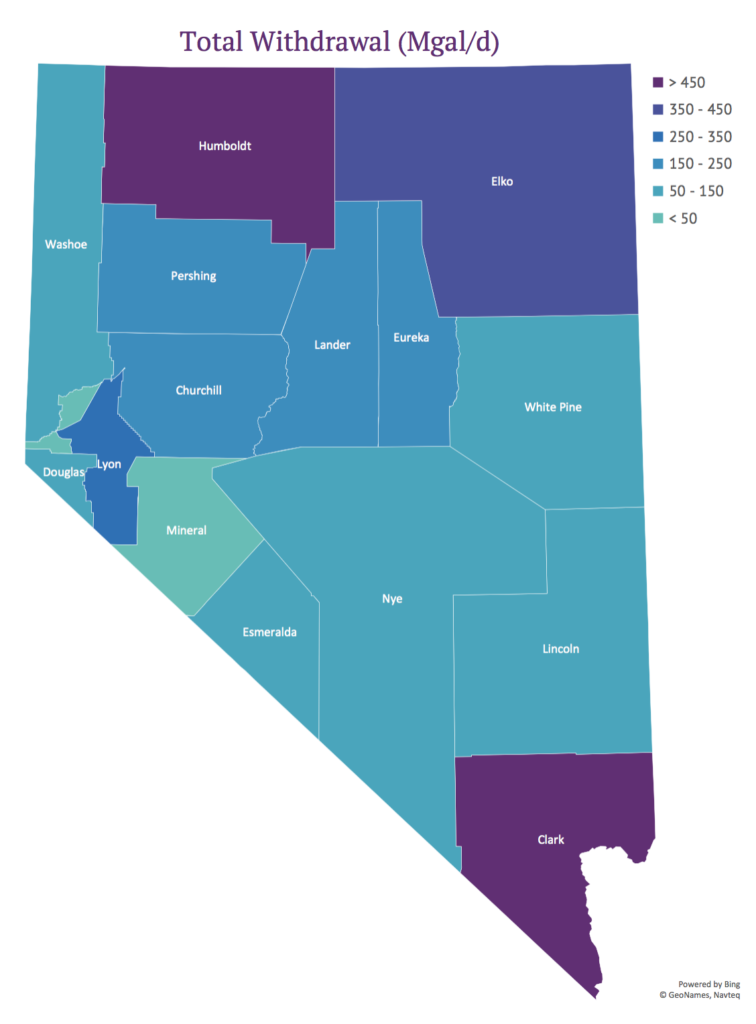 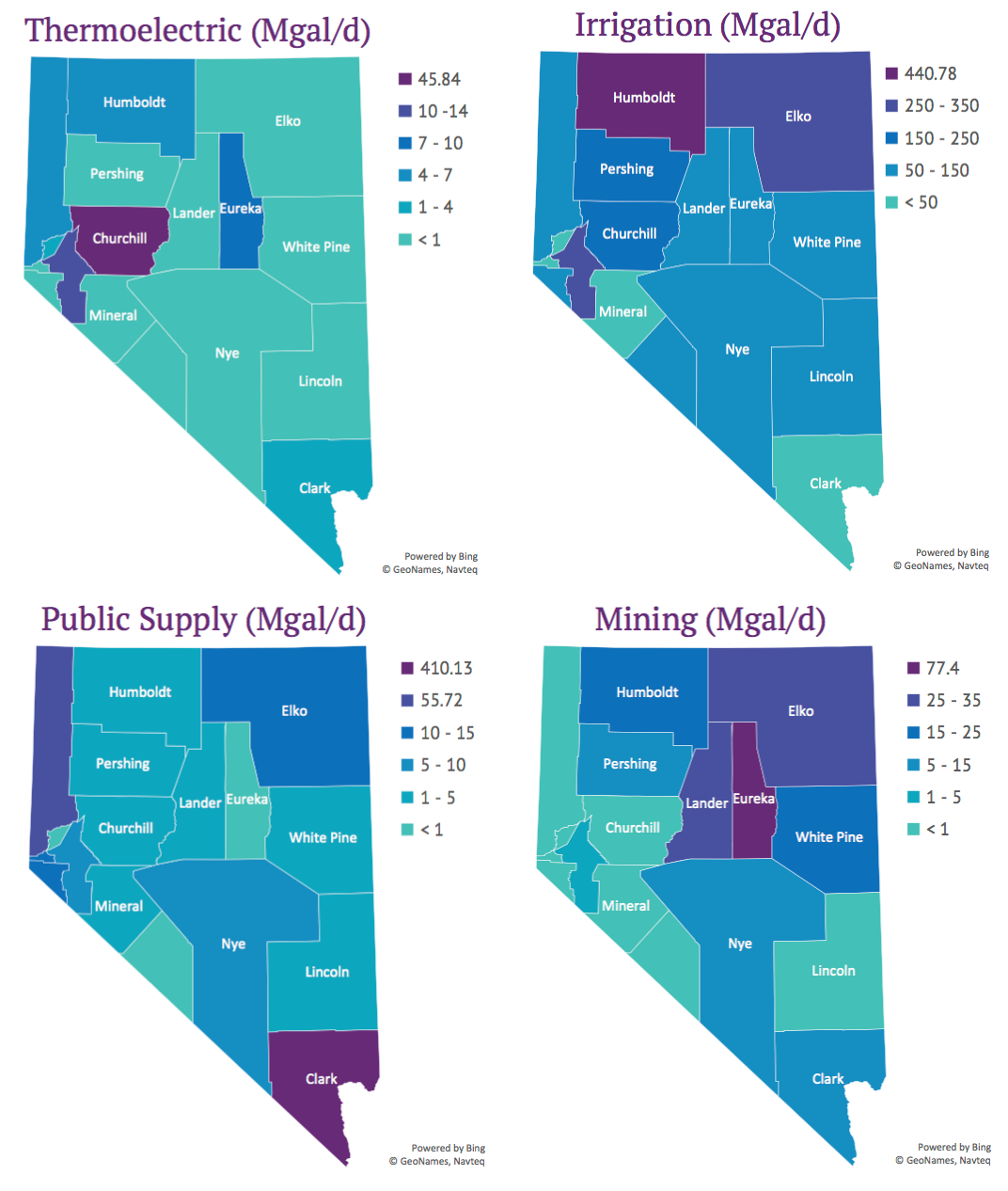 Eureka County withdraws the largest share of water for mining use, approximately 77 Mgal/d. Again, water-use reflects the dominant industries across the economic and geographic landscape. This aligns with expectations, as Eureka County is near the Carlin Trend, the 50 mile stretch of land famous for its rich gold deposits. With 446 mines dispersed throughout the county, mining remains a significant industry in the region of Nevada.

Finally, Churchill County withdraws the largest share of water for thermoelectric use (45.84 Mgal/d). Churchill County is home to several geothermal energy plants, which may partially explain the relatively large amounts of water withdrawals in this region. Geothermal plants generate renewable energy by leveraging the heat generated beneath the Earth’s crust. The most common application is “hydrothermal convection,” the process of heating water beneath the Earth’s crust and using the subsequent steam to drive electric generators. According to USGS data, all the water in Churchill County used for thermoelectric power generation is withdrawn from saline (salt) water sources, likely from deep within the ground.