Would Nevada home buyers benefit from a flood hazard disclosure act, which would legally require sellers and their acting agents to explicitly inform prospective home buyers if the property occupies a high-risk flood zone? Admittedly, it has been some time since Nevada experienced a significant flood disaster, but as history informs us, the region is not immune to such catastrophes. On July 8, 1999, a severe flood destroyed 369 Las Vegas homes and cost an estimated $20.5 million in total damages to both public and private property. Rural towns in the region have been affected by major floods as well. In September 2014, a flash flood damaged or destroyed a total of 139 homes in the cities of Moapa, Logandale, and Overton. Thus, despite the dearth of annual rainfall in the region (Nevada is the driest state in the nation), the risk of experiencing a flood disaster remains a legitimate threat. 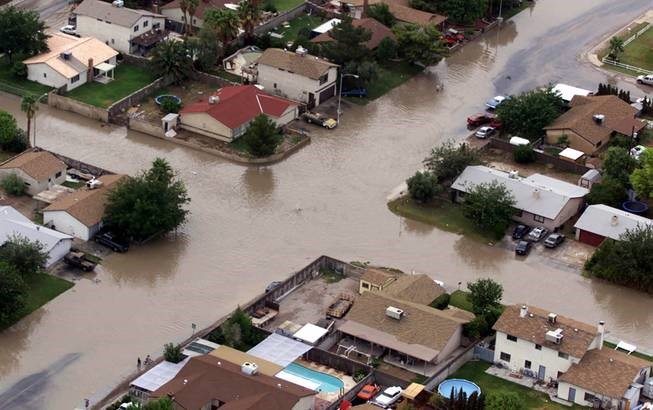 However, evidence suggests that prospective home buyers and homeowners may not understand or appreciate flood risk fully and accurately. A 2013 survey conducted by the Federal Emergency Management Agency (FEMA) found that only 3 out of 10 households in the United States believe their community is at risk of flooding, and that fewer than 10 percent of households believe that their own home is at risk. Furthermore, it has been argued that home buyers’ flood-risk perceptions are likely to be even more diminished in the American West because the region lacks visual cues, such as hurricanes and storm surges, that demonstrate potential for flood events. A 2011 survey released by FEMA supports this argument. Survey results revealed that risk perceptions are slightly higher in communities near the Great Lakes, the Gulf of Mexico, and the ocean, where precipitous environmental threats are more salient.

If this hypothesis about the American West is correct, then residents living in Nevada’s exceptionally dry climate could lack flood hazard awareness as well. Thus, establishing a policy that ensures sellers and their acting agents explicitly communicate potential risks to prospective home buyers could prove beneficial, as doing so would increase risk awareness and reduce information asymmetry. Should Nevadans consider enacting such a policy?

First, it is important to clarify what constitutes a high-risk flood zone. FEMA classifies the “Special Flood Hazard Area” (SFHA) as a region in which there is at least a one percent chance of a flood occurring in a single year. FEMA established this classification as a nationally standardized metric to objectively assess relative flood risk for any and all types of environments. Using this categorization, the risk profile for a SFHA home located in a hurricane-prone coastal region, for example, can be comparable to a desert SFHA home subject to flashfloods. In short, the classification allows probabilities of flooding to be comparable regardless of the geographic climate.

In general, if prospective home buyers are sufficiently aware of the potential for flooding, homes in the Special Flood Hazard Area should sell at a lower price relative to non-SFHA homes, all else equal. There are two major reasons why:

If homeowners truly interpret flood threats correctly, riskier homes should sell for a lower price. A significant body of research confirms that SFHA homes in coastal cities (e.g., North Carolina, Louisiana, etc.) are indeed valued lower relative to non-SFHA homes. However, one study considered homes dispersed throughout the state of California and found no discernable discount, suggesting that the risk was not capitalized by home buyers in this region. It was not until California introduced a disclosure act that home buyers’ decisions were affected.

In 1998, California introduced Assembly Bill 1195, a natural hazard disclosure law, which required sellers to formally disclose whether their home resides in a hazardous area. The law explicitly requires that sellers show potential buyers a Natural Hazard Disclosure Statement before closing on a real estate deal; if the seller or seller’s real estate agent fails to disclose the statement within three days of signing a contract, then the buyer has the right to terminate the transfer. One study found that after the policy was enacted, homes that occupied SFHAs sold at lower values, indicating that the disclosure statement effectively communicated the natural hazard risks to potential buyers. Furthermore, the legislation was particularly effective at communicating risks to neighborhoods with a higher percentage of Latino residents, as the disclosure was offered in multiple languages.

It should be noted that, to our knowledge, no peer-reviewed research has considered the effect for homes in Nevada. Our preliminary statistical analysis shows that the SFHA designation reduces home value by approximately 3.5 percent in Southern Nevada, which is much lower when compared to coastal or river-land regions, where discounts as high as 10 percent are observed. The results imply that home buyers in our state may not fully incorporate all of the associated risks. Of course, more thorough research is necessary to confirm this notion. If true, however, a disclosure act similar to California’s AB 1195 could be useful for Nevada.

In Southern Nevada, home prices continue to rise as the stock of available housing remains constrained.  A strong economy and growing population in the region have greatly contributed to the demand for additional housing. To meet this growing demand, homebuilders will undoubtedly continue to expand production in the state. In fact, this year alone, homebuilders purchased more than double the amount of land as in 2017 for the purpose of homebuilding.

As the stock of housing and commercial units grows and space becomes more limited, it becomes more likely that homes will be built in high-risk flood regions. Empirical data supports this notion. As is evident in the figure below (see Figure 1), the share of new Clark County homes built in the SFHA has increased over time, and continues to follow a general upward trend. (Source of Figure 1 data is: Clark County Assessor’s Office & Clark County Regional Flood Control District).

As Nevada’s 80th legislative session approaches in 2019, expanding housing supply remains a top priority for Nevada lawmakers. The Nevada Legislature’s interim affordable housing committee is currently examining the issue and is expected to draft legislation based on their study during the next session (see our blog on Nevada Affordable Housing). While the Legislature continues to identify housing solutions for Nevada, they may also want to consider establishing a flood disclosure act, as doing so will ensure that prospective homeowners are fully informed during the home-buying process. (See here to download blog as pdf.  Guinn_Does Nevada Need a Flood Disclosure Act) 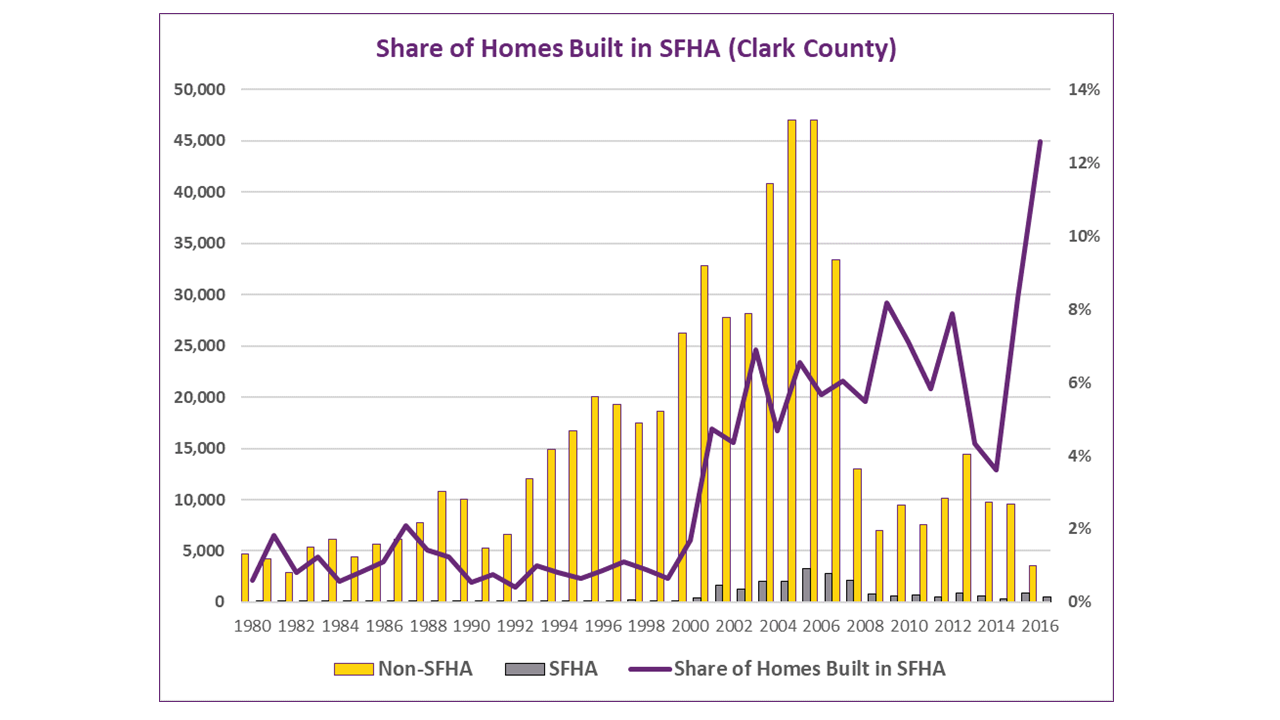