In this post, we compare Nevada Health Link enrollment estimates for the 2019 and 2020 coverage years to those from other states with and without state-based enrollment systems.

Enrollment for the 2020 Insurance Coverage Year

The Silver State Health Insurance Exchange enrolled 77,410 Nevadans through the Nevada Health Link platform during the open enrollment period for the 2020 coverage year. This is down from 83,449 enrollees for the 2019 coverage year, a drop of 7.24 percent.

There are many factors that could account for this decline. The transition to a state-based system required users to claim a new account. This and other features of the transition to a state-based system may have depressed enrollment. On the other hand, enrollment in individual health care plans has been declining nationwide since 2016. Furthermore, federal policy changes such as the elimination of the national individual mandate could have further discouraged enrollment. Regardless, policy makers should continue to identify reasons for depressed enrollment given that Nevada has the sixth highest uninsured rate in the U.S.

Next, we assess how Nevada’s drop in enrollment compares to enrollment changes in other states with and without state-based enrollment systems.

Change in Enrollment for States Using the HealthCare.gov Enrollment Platform 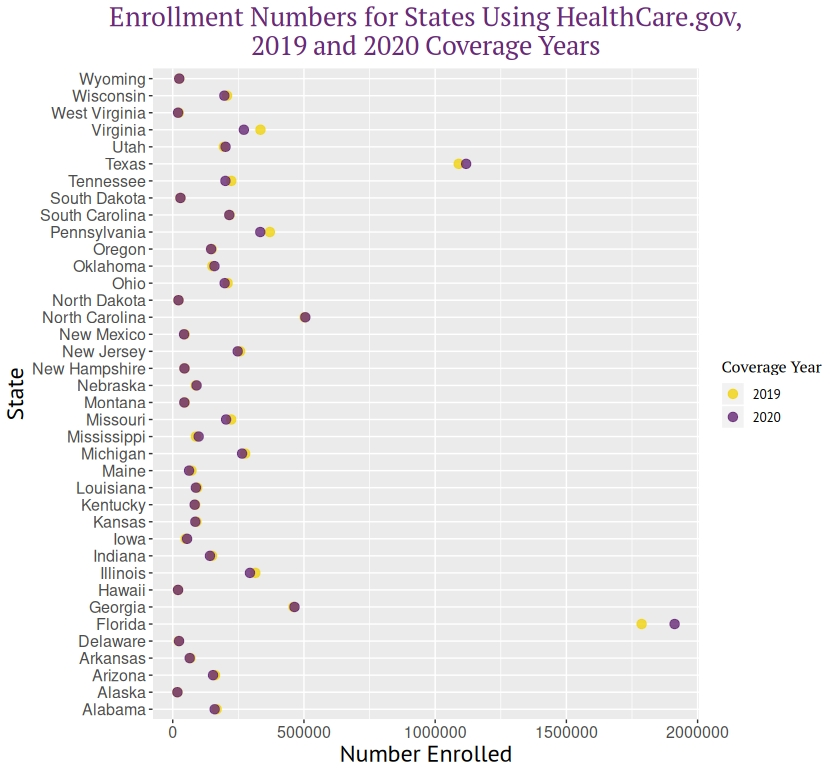 The number of consumers who enrolled in an individual healthcare plan for the 38 states that used the HealthCare.gov enrollment platform for both the 2019 and 2020 coverage years dropped by approximately 0.8 percent. (Nevada was excluded from the comparison.) The largest relative decline in statewide enrollment compared to coverage year 2019, of almost 19 percent, occurred in Virginia, followed by Maine and West Virginia, with respective drops of approximately 13 percent and 11 percent. At the other extreme, Mississippi saw an enrollment increase of almost 12 percent, followed by Iowa, with an increase of almost 11 percent, and Florida, with an increase of over seven percent.

Changes in Other States with State-Based Marketplaces

Several other states have fully state-based marketplaces. California, Colorado, Connecticut, the District of Columbia, Massachusetts, and New York have extended open-enrollment periods into January 2020, so final enrollment counts are not yet available. Idaho has a state-based enrollment system, but it also expanded Medicaid this year, so its changes in enrollment are not comparable to those in Nevada.

In Minnesota, which has a state-based enrollment system, open enrollment ended on December 23, 2019. Approximately 117,520 Minnesotans enrolled, 2,525 more than last year. Likewise, Maryland’s enrollment count increased by 1,637 to 158,600. Rhode Island, Vermont, and Washington have not yet reported their final enrollment numbers.

While the data from states with fully state-based enrollment systems are, at present, limited for the 2020 enrollment year, the results from Minnesota and Maryland suggest that state-based systems are likely not experiencing systematic enrollment obstacles that would explain the enrollment decline in Nevada.

Nevada is the first state in recent years to move from the federal marketplace to a fully state-based marketplace. The transition process required consumers to claim their new Nevada Health Link account, which may have posed an obstacle to some potential enrollees. Heather Korbulic, the executive director of the Silver State Health Insurance Exchange, stated that “Plan Year 2020 enrollment numbers will become the baseline from which we will work to continue to increase the number of insured Nevadans as we move forward.”

The decline in enrollment is worrying in the context of relatively stable national enrollment, particularly through HealthCare.gov. However, there is no guarantee that remaining on the federal marketplace would have boosted enrollment: Nevada experienced a similar enrollment decline between coverage years 2018 and 2019, again significantly exceeding the national decline in enrollment. Furthermore, the benefits of transitioning to a state-based platform may not be fully realized until subsequent coverage years.