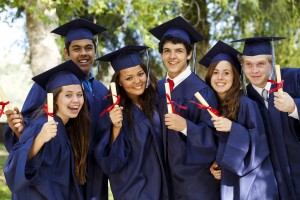 This weekend, commencement exercises will take place at both of Nevada’s largest universities, University of Nevada, Las Vegas (UNLV) and University of Nevada, Reno (UNR). Nevada State College held its graduation last Saturday. Yet, these events in Nevada are cause for celebration for fewer students than elsewhere in the U.S. The number of students earning their bachelors degrees from these institutions remains far below the national average and also lower than many of the public colleges and universities in the Intermountain West.

Figure 1 compares the graduation rates, student-teacher ratios, acceptance rates and total student enrollment of the state’s three public four-year colleges with data from the other public colleges and universities in the Intermountain West.

Figure 1: Overview of State Colleges and Universities in the Intermountain West

Tied for the lowest graduation rate within four years of 5 percent are Nevada State College and Metropolitan State University of Denver. Both of these schools are considered commuter colleges, as neither offers on-campus housing for students, and both schools have a considerable number of part-time students. (These two factors would likely lower the number of students able to graduate in four years.) Nevada State reports that 61 percent of its students are part-time, significantly more than the 40 percent at Metropolitan State.

Both schools are also identified as serving students from diverse backgrounds. At Nevada State College,50 percent of its students come from a culturally diverse background and 51 percent are first-generation college students. As such, the U.S. Department of Education has identified the school as a Minority Serving Institution. In addition, after having completed two steps in the application process already, Nevada State College announced that it will apply for the federal designation of Hispanic- Serving Institution. Roughly 34 percent of students at Metropolitan State University identify as non-white. Excelencia in Education, the Hispanic-Serving Institutions Center for Policy and Practice, has named both schools as Emerging Hispanic-Serving Institutions.

Long-held as the state’s only top-tier research university, UNR has a graduation rate considerably lower than the other universities in the Intermountain West who share the same distinction. The school is ranked 187th on the U.S. News & World Report list of the best national universities. According to the publication, “Schools in the National Universities category, such as Columbia University and the University of Pennsylvania, offer a full range of undergraduate majors, plus master’s and doctoral programs. These colleges also are committed to producing groundbreaking research.”

Figure 2 compares UNR’s graduation rate and ranking with the other universities in the region on the list.

With the exception of Utah and Nevada, all the other states in the Intermountain West have two universities that are ranked on this list.

Within the next two decades, UNLV aims to join UNR as a top-tier research university. Senate Bill 514, passed during the last legislative session, took two steps to enhance the university’s standings. First, the bill appropriated $26.7 million for a medical school at UNLV. The bill also seeks to expand graduate medical education: the bill includes $5 million annually for start-up grants to begin residency and fellowship programs. It also includes $1.9 million in FY2016 and $2 million in FY2017 for NSHE to expand public undergraduate and graduate medical education, as the Guinn Center reported last year.

During the Southern Nevada Forum last week, legislators presented policy recommendations to more than 200 local government officials, business leaders and other community members. Among them were proposals to add $17.1 million to the UNLV School of Medicine’s base budget and an additional $10 million to fund program development in graduate medical education. These funds would drive the push to make UNLV a top-tier school.

Another common metric for comparing colleges is the six-year graduation rates, which the all colleges and universities are required to report to the U.S. Department of Education. According to the National Center for Education Statistics, the average graduation rate within six years is 59 percent.

Figure 3 compares the Figure 1 compares the six-year graduation rates of the state’s three public four-year colleges with data from the other public colleges and universities in the Intermountain West.

Figure 3: Six-Year Graduation Rates of Universities in the Intermountain West

The top five public universities in the nation with the highest six-year graduation rates are shown in Figure 4.

Nevada’s lawmakers could consider the following policy recommendations as possibilities for helping to bolster the state’s three public colleges: