From the Natural State to the Silver State, from the delta to the desert, from the home of Johnny Cash to the playground of Elvis, Nevada and Arkansas differ considerably, but in other ways, these two states are surprisingly similar. As a lifelong Arkansan who moved to Nevada this summer, it seemed instructive to begin my new role as Director of Health Policy at the Guinn Center by exploring similarities and differences between the two states, with a particular emphasis on the healthcare landscape. A discussion and comparison of select population features and demographic factors and how they influence the healthcare landscape of the two states follows.

With just under 1,500 miles separating the largest cities of the two states, Arkansas and Nevada are nearly half-a-country apart. Arkansas has seventy-five counties, (including both a Nevada and a Clark county), compared to just seventeen in Nevada. The two states are quite comparable in terms of overall state population size, with both currently hovering near the three million mark. However, population growth rates over the past half century show marked differences. Nevada’s population has grown more than 500 percent since 1970, while Arkansas’s population has increased at a much slower rate, growing only slightly more than 50 percent, as shown in Figure 1. 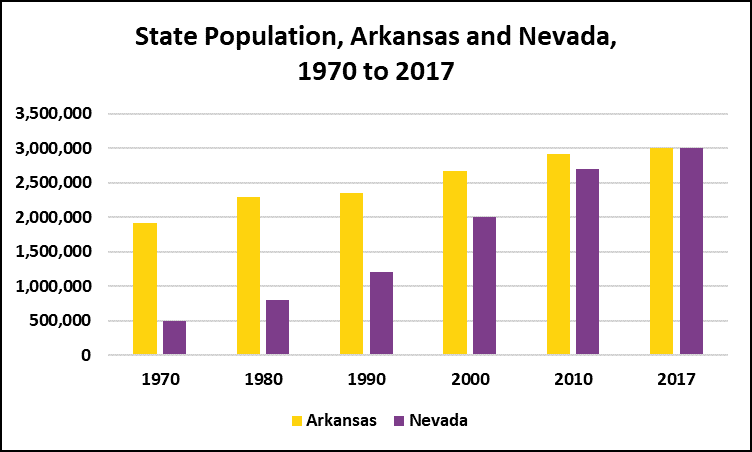 Although the two states have roughly equal populations, Nevada covers a much larger area in terms of square miles (110,572) and is, in fact, slightly more than twice the size of Arkansas (53,179 square miles). In Nevada, approximately 80 percent of the state’s land area is administered by the federal government, whereas the percentage is much smaller in Arkansas, at approximately 13 percent. This fact contributes to great differences in the way the population of the two states is distributed.

This section provides a comparison between Nevada and Arkansas on a number of demographic factors, such as age, race/ethnicity, citizenship status, and poverty. Figure 2 below shows that the two states have similar age distributions. 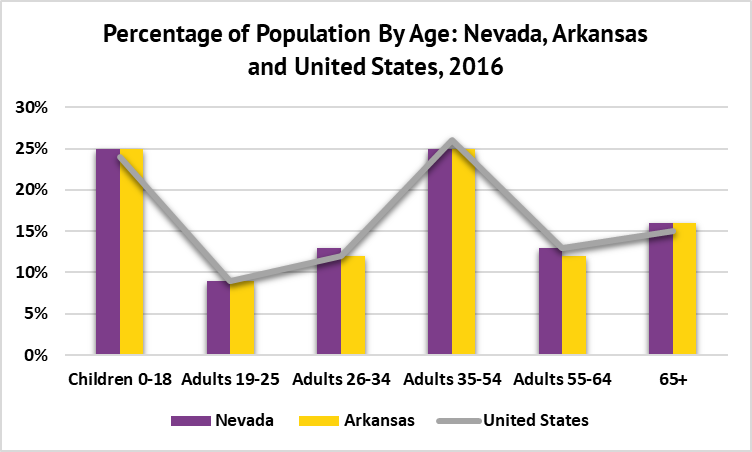 Racial and ethnic demographics have important implications for health policy as research has shown that people of color continue to face significant disparities in health status and health outcomes, health coverage, and access to and utilization of care. Nevada and Arkansas have significant differences in the racial and ethnic composition of their populations. Relative to both Nevada and the national average, Arkansas has higher percentages of white and black individuals but lower percentages of Hispanics. Figure 3, below, displays the population distribution, by race and ethnicity, for the two states and in comparison to the national average.

As shown in Figure 4, the two states differ significantly in terms of the percentage of non-citizens, with Nevada’s percentage slightly above the national average, but twice that of Arkansas’s.  This difference may have implications as the two states work to address the rate of uninsured and provide access to health coverage. Specifically, federal rules governing who qualifies for Medicaid and Exchange coverage may vary depending on citizenship and immigration status. 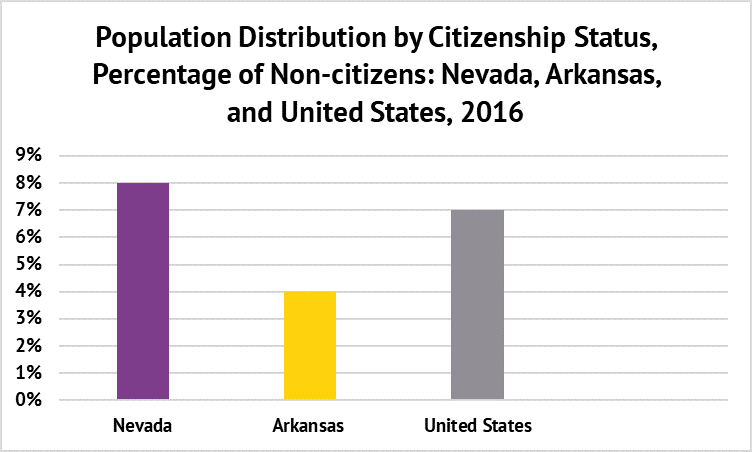 Research shows that people living in poverty experience worse health outcomes.  As shown in Figure 5, a much larger percentage of Arkansas’s population lives below the federal poverty line, as compared to Nevada’s. 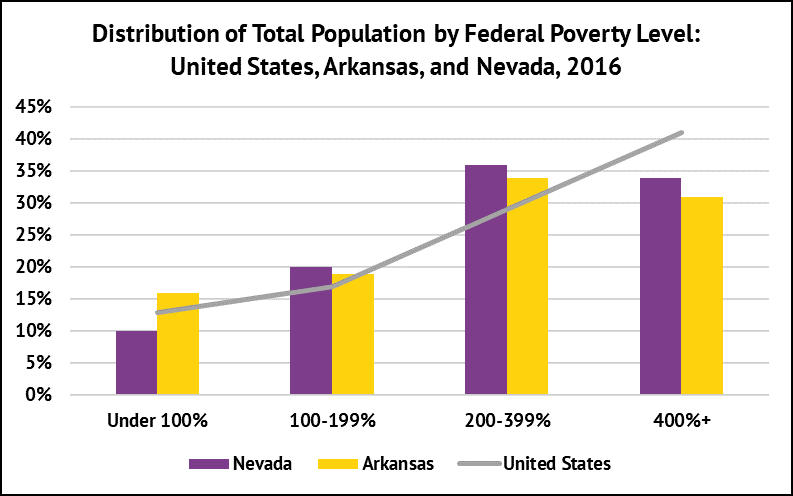 Demographic and geographic characteristics such as age, race and ethnicity, citizenship status, socioeconomic status, and rural and urban status have implications for health coverage options and health outcomes. For example, although many areas of Nevada are more rural than Arkansas, a greater percentage of Arkansans live in rural communities than do Nevadans. This affects the way in which healthcare services are delivered in both states. For example, Arkansas currently has 47 rural hospitals, while Nevada has 10. Conversely, Nevada has more progressive telehealth laws and Medicaid policies than Arkansas.

Differences in health and healthcare that exist between populations are often referred to as health disparities. While access to healthcare is critical, it is also important to note that (access to and/or quality of) healthcare has a relatively small impact on overall health. For example, a well-known study from the New England Journal of Medicine concluded that healthcare contributes only about 10 percent to premature deaths, whereas other factors such as genetics, social and environmental factors, and individual behaviors all have a far greater impact on the risk of premature death. These factors are commonly referred to as the social determinants of health—defined as “the conditions in which people are born, grow, live, work, and age”—and have garnered recent attention for their effects on health outcomes.

Arkansas and Nevada both expanded Medicaid coverage to the new adult group, as provided for under the Affordable Care Act (ACA) of 2010. Medicaid expansion contributed to an appreciable drop in the rate of the uninsured in both states. In Nevada, the percentage of uninsured dropped from 19 percent in 2013 to nine percent in 2016. In Arkansas, the percentage of uninsured dropped from 15 to eight percent over the same period. Thus, the two states are now at or slightly below the national uninsured rate, with eight and nine percent uninsured, respectively. Figure 6 compares the differences in coverage type between the two states and the national average. 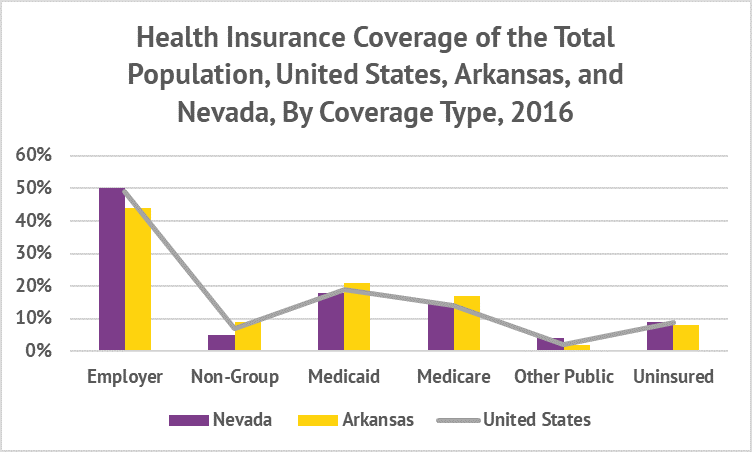 Despite their geographic distance, a comparison of the two states indicates that Arkansas generally ranks higher in measures of access and affordability of healthcare but worse on measures of healthy living, such as tobacco use and infant mortality. Nevada, on the other hand, generally performs better than the national average in terms of addressing health disparities, but ranks 51st on measures related to access to preventive care and treatment. 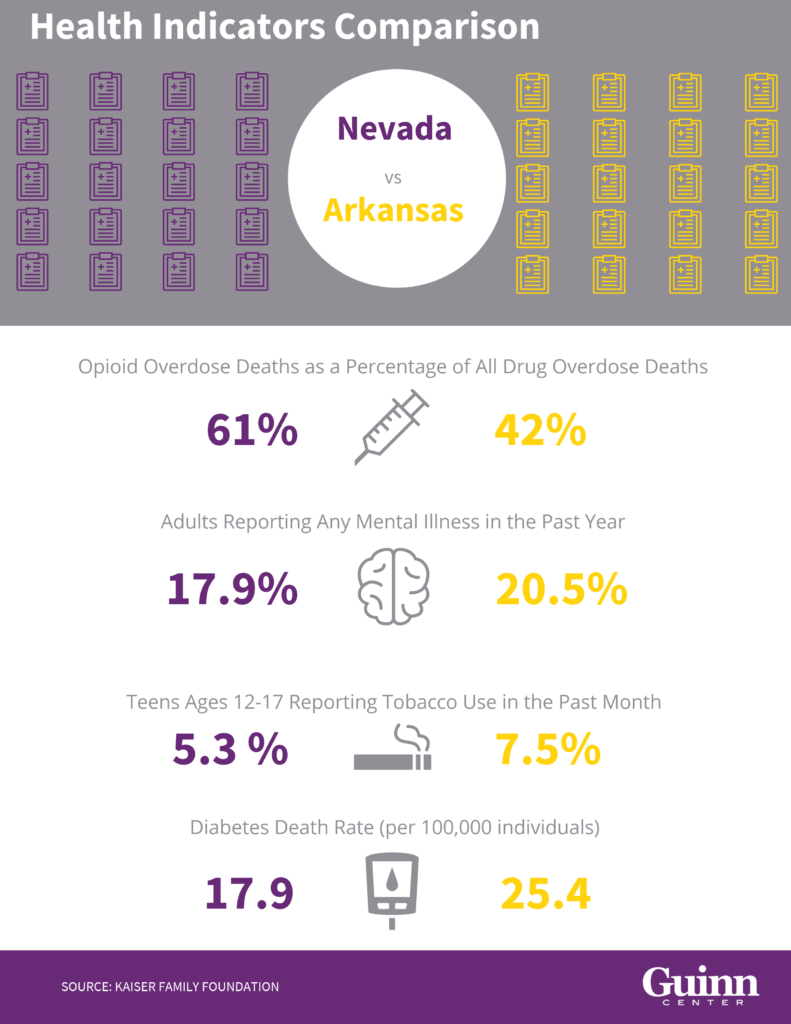 Despite the distance and certain demographic differences between the two states, Nevada and Arkansas face many of the same issues and challenges when it comes to improving the health of their populations.  Cross-state comparisons and analysis of successful state initiatives may prove promising in determining which initiatives may be replicable (or not) from one state to the other.  I look forward to deepening my understanding of the nuances of the health policy landscape in Nevada and exploring the applicability of best practices from other states, including Arkansas. 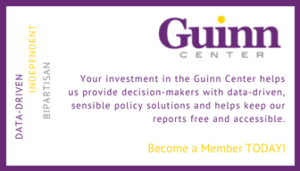