Last month, Prosperity Now (formerly Corporation for Enterprise Development or CFED) released its annual Prosperity Now scorecard, as discussed in the companion report, On Track or Left Behind. Nevada’s cumulative rank was #46, based on scores in 5 policy areas: (1) Financial Assets and Income (rank #43), (2) Businesses and Jobs (rank #45), (3) Homeownership and Housing (rank #46), (4) Healthcare (rank #34), and (5) Education (rank #43). Nevada’s 2017 ranking is two places higher than the 2015 and 2016 ranking of #48.  Nevada’s decision to expand Medicaid accounts for its higher health ranking, relative to the other four categories.

Data reveals there is tremendous variation in Prosperity Now’s scorecard among the Intermountain West states (see Table 1). Nevada ranks #46, followed by New Mexico at #47.  In contrast, Colorado and Utah have significantly higher scores at #6 and #4, respectively. 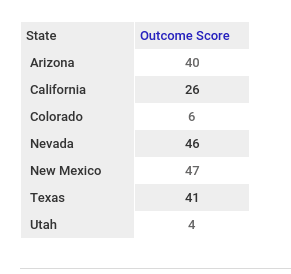 Table 2 presents a selection the specific outcomes in the five broad categories for states in the Intermountain West. Nevada has the highest percentage of underbanked households in the country, defined as households that have a checking or savings account, but who also obtain financial products and services outside of the banking system (e.g., pay day loan, title loan, etc.). More than half (52.7 percent) of employers offer health insurance in Nevada, the highest rate in the region and #4 in the country. 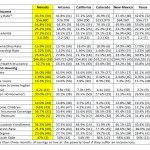 Other reforms seeking to address financial security failed to pass, however. Assembly Bill 515, which failed to pass, would have created a database of payday, high-interest, and title loans issued in Nevada for the purpose of determining the demand for such products. Groups such as the Opportunity Alliance Nevada and the Legal Aid Center of Southern Nevada continue to work to identify and support policies that could increase the long term economic security of Nevadans.