While Nevada has the second highest number of acres of federal land in the country, it receives less Payments in Lieu of Taxes from the federal government than other, more populous states. The purpose of the Federal Payments in Lieu of Taxes (PILT) program is to help local governments offset the loss of property tax revenue due to the presence of tax-exempt federal lands within their boundaries. The Tax Expenditure report recently released by the Department of Taxation shows that the value of this exemption was $258 million in fiscal year (FY) 2013 and $280 million in FY 2014.

When appropriated by Congress, the PILT funds are distributed directly to the counties and may be used for any governmental purpose. Since 1977, Nevada’s counties have received more than $400 million from this program, which is administered by the U.S. Department of the Interior (DOI) to cover primarily the Bureau of Land Management, and the National Park and Forest systems’ lands within the state.

A fact sheet from Nevada’s Legislative Counsel Bureau provides background information concerning the State’s allotments over the years, the population impacts of the program, and its erratic funding through federal FY 2013. While the payments were made consistently since the PILT’s inception, the amounts appropriated by Congress historically were inconsistent, difficult to predict, and insufficient to provide full funding under the adopted formula.

This complex formula is based on the county population, payments in prior years from other specified federal land payment programs, the amount of federal land within each jurisdiction, state laws directing payments to a particular governmental purpose, and the Consumer Price Index.

Information from DOI is now available for the FY 2014 payments. It might be expected that the states and counties with the most federally-controlled lands would receive the lion’s share of the funds. But the population factor in the formula skews the amounts allocated both among the states and within their counties. For example, Nevada ranks second behind Alaska with the highest number of acres of federal land, but ranks 10th in the amount of federal PILT funding received.  California had the highest total payment in FY 14 at $45.3 million, while having the third largest percentage of federal lands subject to PILT.  Alaska received the 8th ranked payment.

The same disparity appears within the state’s counties.  Table 1 shows the population, total qualifying acreage, and FY 14 PILT payments and their rankings among Nevada’s counties. Pershing and Storey Counties’ acreage and payment rankings are equal, while those of Elko, which received the largest amount and No. 1 payment ranking, and Mineral Counties are nearly the same.

Lincoln County displays the largest disparity between its 3rd ranked federal acreage and 11th ranked PILT payments, due to its extremely low population density. Lyon County, however, has the same large range of disparity at the opposite extreme with a 14th ranked acreage and the 6th highest payment ranking. The more populous Washoe and Clark Counties, with the 8th and 6th acreage rankings respectively, received the second and third highest rankings for PILT payments within the State of Nevada. 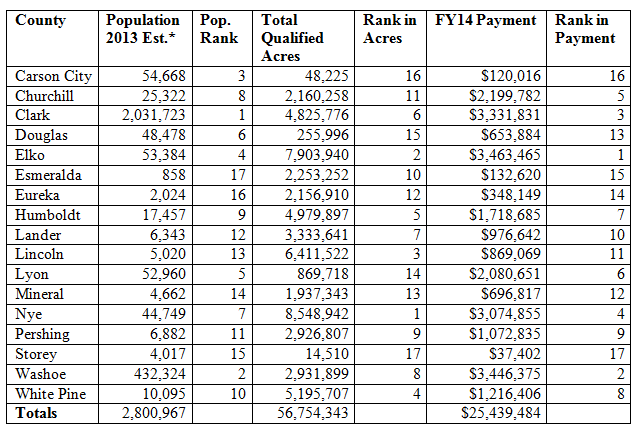 Enactment of the federal stimulus package (the Emergency Economic Stabilization Act of 2008) authorized counties, for the first time, to receive their full entitlements through the PILT program from FY 2008 through 2012.  For Nevada’s counties, the total $22.6 million payment in FY 2008 represented a 63 percent increase from the previously underfunded year.  The sequester cuts in FY 2013 caused an overall 5.1 percent decrease in PILT payments, but full funding was restored with passage of the federal Agriculture Act of 2014, and Nevada’s total payments in FY 14 increased to $25.4 million.  The Obama Administration requested a one-year extension of the PILT program to fund payments in FY 15, and that request is pending current Congressional budget actions.

For most of its history, PILT was a discretionary program subject to annual appropriations that never reached its authorized levels.  It became a fully funded mandatory entitlement program over the past five years under the legislation adopted to address the effects of Great Recession, and became a more reliable source of revenue, particularly for the rural counties in Nevada.  Now apparently returning to a period that requires annual extensions and possible program changes, the uncertainty of these payments and their levels will need to be carefully monitored by Nevada’s county governments until more stability is achieved.