Every year Education Week publishes Quality Counts, a ranking of the education systems in each of the 50 states and District of Columbia. In the 2018 report, Nevada ranked 51st. However, the methods to create this overall ranking are complicated, with Education Week aggregating 39 different variables that are grouped into three categories (Chance for Success, School Finance, and K-12 Achievement).

The remainder of this analysis will focus specifically on K-12 Achievement and will examine trends in Nevada since 2014. Here we note that one way to review the data is to examine the numbers and trends in an absolute sense. When doing this, a reader can make judgements as to whether the proficiency rate/gaps in achievement/graduation rate is acceptable. Another way to consider the data is how the indicator in question compares to other states (or, reviewing the data from a relative perspective). Both absolute and relative data will be presented.

The National Assessment of Educational Progress (NAEP) is an assessment given to a representative sample of students in every state and the District of Columbia. Several content areas are tested, but results are only aggregated at the state-level for the reading and mathematics portion of the assessment.[1] Additionally, the assessment is generally given once every other year (to students in the 4th and 8th grades). Because of this, Education Week’s K-12 Achievement measure is only updated every two years (whereas the Chance for Success and School Finance categories are updated annually).

Table 1 displays how Nevada students fared on the 2017, 2015, and 2013 NAEP assessment, which is reflected on Education Week’s Quality Counts ratings in the subsequent years (2018, 2016, and 2014, respectively). Proficiency rates on the mathematics portion of the NAEP decreased from 2014 to 2018 in both 4th and 8th grades. The decrease in 4th grade math proficiency resulted in Nevada falling several spots compared to other states. In 8th grade, Nevada held constant compared to other states. Fourth grade reading proficiency increased from 2014 to 2018, resulting in an increase of three spots in the national rank. However, the 8th grade proficiency rate dropped, resulting in the loss of three spots from 2014 to 2018. 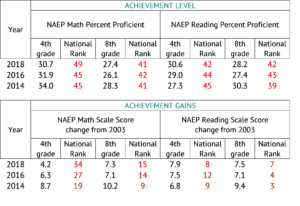 Unfortunately for Nevada, the gap between the scale scores of students who are and are not eligible for Free-and-Reduced Price Lunch has also increased between 2014 to 2018 (see Table 2). In this case, lower numbers are better, suggesting a smaller achievement gap between the two categories of students. This growing gap has resulted in Nevada falling toward the bottom of all states for addressing the poverty gap.

Table 3 displays the percentage of students scoring in the “Advanced” category on the 8th grade NAEP Math Assessment (students on the NAEP receive a scale score, which is then assigned to one of three performance levels: Basic, Proficiency, or Advanced). It also displays the change in percentage since 2003. Positively, Nevada is increasing the number of students scoring Advanced. However, this increase has done little to change the state’s ranking, and the increase does not seem to be keeping pace with the rest of the United States, as Nevada has fallen five spots in the national rankings related to the change since 2003.

The final group of variables included in K-12 Achievement in Education Week’s Quality Counts ratings is the percentage of Advanced Placement (AP) exams taken by 11th and 12th grade students with a score of a 3 or better. A student can receive a score of 1 to 5, with the College Board stating a 3 represents the student is “capable of doing the work of an introductory-level course in a particular subject at college.”

Here again, the data presented in Table 5 displays a positive trend, increasing from 15.9 percent in 2014 to 23.4 percent in 2018. The change column displays the change from 2000 to the reporting year. The results of both the percentage and the change since 2000 place Nevada near the middle of all states.

Overall, the education rankings published by Education Week suggest a number of positive educational outcomes are occurring in Nevada. Graduation rates are increasing, as are the percentage of AP exams taken by 11th and 12th grade students with a score of 3 or better. However, some troubling trends are also presented: proficiency rates and the poverty gap (both measured through 4th and 8th grade NAEP reading and math scores) are trending downward; the single exception is 4th grade reading.

In terms of how Nevada fares compared to the other states, Nevada is near the bottom of the rankings for graduation rates and NAEP results. The graduation ranking will most likely improve as the graduation rate continues to increase. Increasing the NAEP proficiency rate for all students is the challenge for Nevada’s education system. This appears to be the primary lever school districts and the Department of Education can pull to improve Nevada’s educational ranking. However, emphasizing the importance of the NAEP may be challenging primarily because it is only administered every two years to a sampling of students across the state. Even so, Nevada students have performed better on the NAEP over time. The State ranks in the top 10 for the change in NAEP proficiency since 2003 on the 4th and 8th grade reading assessment, as well as ranks 15th in 8th grade change in math proficiency. This finding warrants further study to determine what Nevada has done to increase proficiency rates to be able to then continue to build upon that success.

Unfortunately, Nevada’s overall K-12 Achievement ranking has been moving in an unfavorable direction. Nevada ranked 36th in 2014, 38th in 2016, and 40th in 2018. Education decisions should not be based solely on one data point, and the results from the Quality Counts report is no exception. However, when people reference that Nevada is last in education, most often they are citing this report. As noted previously, this ranking includes several items that are outside of the control of a school district or the Department of Education. However, even with all those caveats, the data are informative and can help provide a more complete understanding of the educational landscape in Nevada.

[1] The use of the NAEP assessment is understandable, but not without problems. All states administer the NAEP, which makes comparison easier. However, a study by the American Institutes for Research found that while there is significant overlap between the NAEP and Common Core standards being taught to students, there is content on the NAEP that is not reflected in the content standards of the grades assessed. This would impact all states, but it is still important to note that there are several questions included on the NAEP covering topics that might not have been taught to students at the time of the assessment.