Last night, Nevada Governor Steve Sisolak gave his first State of the State address before legislators, his cabinet members, other elected officials, his family, friends, and supporters. His plan did not portend a dramatic shift in policy – something akin to A Bold New Day in Nevada. Rather, his vision, anchored to our strong economy, revealed a steady continuation of many of the investments and programs supported by his predecessor, particularly in education. Overall, Governor Sisolak’s vision seeks to ensure that all Nevadans are included in our continued economic expansion.

With respect to education, the steady, “stay the course” approach makes sense. Over the past few years, teachers have expressed frustration with not having sufficient time to implement programs with fidelity, especially when a leadership change at the state and/or district level prompts a revised set of mandates. The changing mandates and greater pressure to perform in the absence of sufficient time to allow reforms to take hold have likely contributed to low teacher morale, which drives high teacher turnover in our state. Moreover, many of the education programs launched over the last five years need time to take root and bear fruit. [Too often, policy makers scrap programs and change direction without allowing sufficient time to evaluate the effectiveness of an original intervention or program].  A dramatic shift in policy at this point in time would not benefit our students and would lower any expected return on investment. The good news is that a recent external evaluation suggests that many of these programs – Zoom, Victory, Read by Grade 3, are having a positive impact on students. Governor Sisolak’s stabilization of programming over the course of the next biennium will provide a welcome respite to teachers and school site leaders, allowing them time to go deep and providing an opportunity to make any minor revisions to these programs to solidify early gains.

Following the State of the State, many of the news outlets reported that Governor Sisolak was spending $600 million in education. While this is true, very few of the Governor’s priorities reflect “new” or additional monies. In Table 1, we report the 2017-2019 appropriation from the budget approved by the Legislature (Column A) and the estimated 2019-2021 budget that Governor Sisolak recommended during his State of the State address (Column B). As seen, funding in two of the categorical programs (Victory and Zoom) remains flat. There were slight increases in two other categorical programs: weighted funding and Read by Grade 3. However, quite notably, Governor Sisolak announced increases in Pre-Kindergarten/Early Childhood Education beyond what Governor Sandoval had proposed. This is welcome news given that Nevada consistently ranks poorly on national education indicators based, in part, on our low enrollment levels in pre-K programs (as KIDS COUNT reports, Nevada currently ranks 49th in the country in preschool enrollment; only 36 percent of 3- and 4-year olds are currently enrolled). 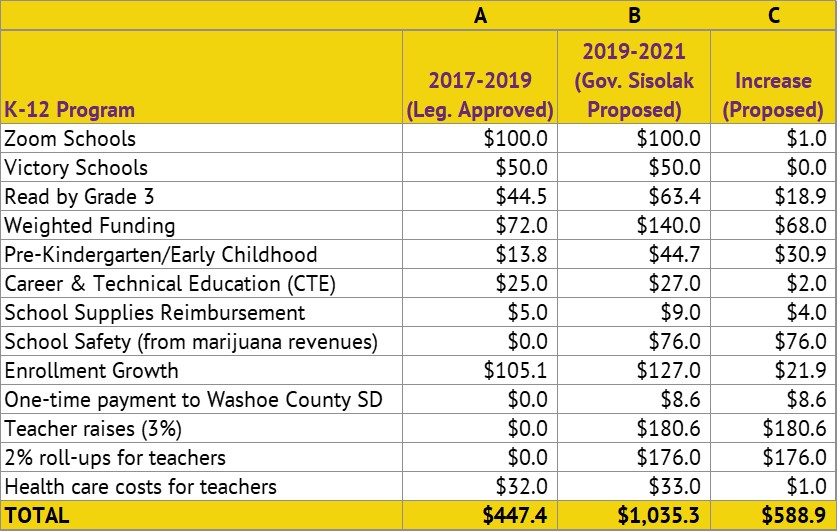 What drew significant attention from media outlets, pundits and policy makers around the state was Governor Sisolak’s proposal to increase all state worker salaries (including salaries for teachers) by 3 percent. This amounted to $90 million for our Silver State’s 26,500 K-12 teachers. As Governor Sisolak noted, this proposed raise increase, if approved, would be the first such raise in 12 years.

While $90 million seems like a significant number, especially compared to other investments, the Guinn Center’s recent analysis indicates that K-12 education funding over time in Nevada has not kept pace with the mandated 2 percent roll ups (merit pay, movement along step and ladder). Figure 1 presented below looks at the per pupil funding over time. In 2000, the basic support guarantee was $3,806. As of FY 2019, the basic support guarantee was $5,967. 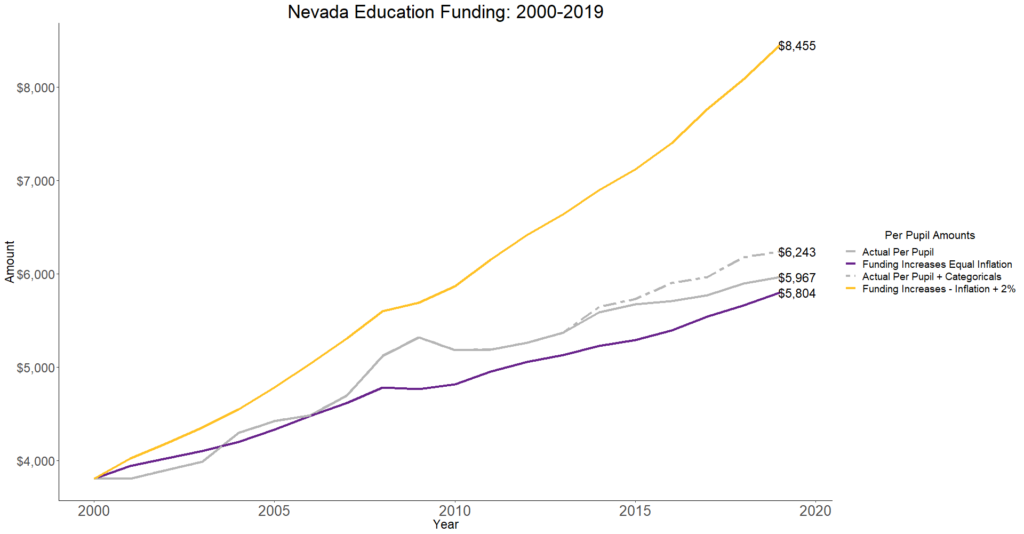