Nevada ranks 46th in the nation in the percentage of residents with a bachelor’s degree or higher (American Community Survey, 2012). Only 22.4 percent of Nevada’s population age 25 years and older has a bachelor’s degree or higher, compared to the U.S. average of 29.1 percent (see Figure 1). Higher levels of education are associated with higher wages and lower unemployment levels so increasing college attainment could have a significant impact on Nevada’s long-term economic health (Bureau of Labor Statistics). 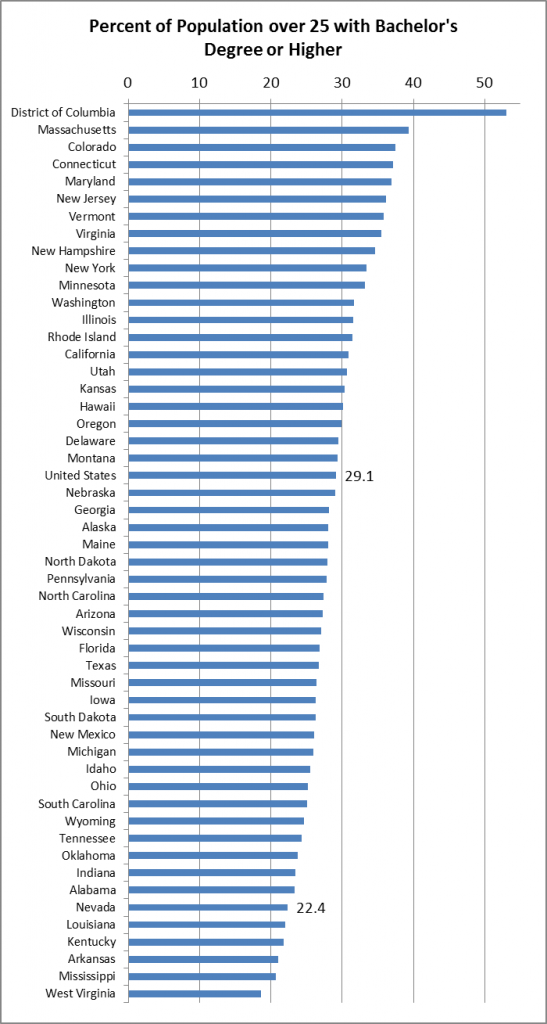 To increase college attainment levels, students need to be prepared to enter college. Data released this week by the ACT provides insight into the college readiness of Nevada’s students. The results illustrate how the courses students choose to take in high school affect their performance on the ACT and their likelihood of success in college. The data also reveals racial disparities in college readiness and shows that some students who aspire to go to college do not ultimately enroll.

The performance of Nevada’s ACT test takers is comparable to the nation’s results.  For both Nevada and the nation, 26 percent of test-takers met the ACT College Readiness Benchmarks in all four areas:  English, reading, math, and science.

A Minority of Nevada’s Students Currently Take the ACT

ACT estimates that only 36 percent of Nevada’s 2014 graduating class took the ACT, so the findings cannot be generalized to the full student population.  However, starting this school year, all 11th grade students will be required to take the ACT as a college and career ready assessment pursuant to AB 288 adopted in the 2013 Legislative Session.  For the 2016 graduating class, Nevada’s ACT participation rate should be 100 percent.

The ACT reports that 19 percent of Nevada’s test-takers indicated that they did not plan to take a core curriculum consisting of four years of English, and three years each of math, science, and social studies. Figure 2 shows that students who take this core curriculum are more likely to meet the ACT college readiness benchmarks. Research conducted by ACT has shown that students meeting three or four ACT College Readiness Benchmarks are more likely to be successful in postsecondary education. 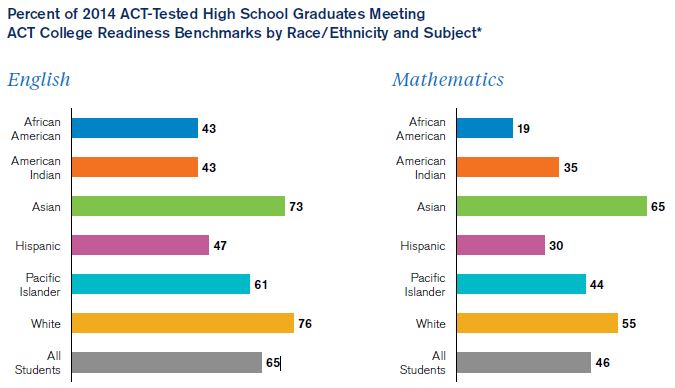 What can Nevada do to Improve College and Career Readiness?

State and school district policies can help improve college and career readiness. Establishing standards and assessing student performance on the standards are important components of promoting college and career readiness. In the last few years, Nevada has adopted the Nevada Academic Content Standards and the Next Generation Science Standards. In 2013, the state overhauled the high school assessment system to move away from an exit exam to end of course exams through AB 288.